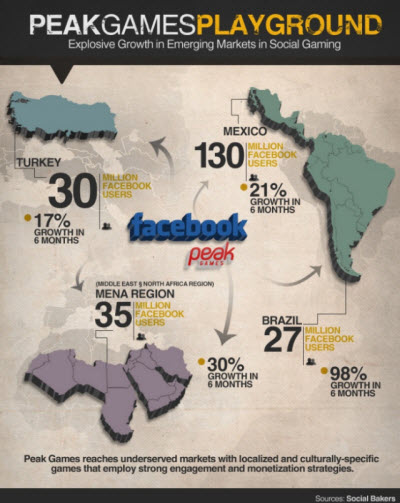 Peak Games has raised $11.5 million for its plan to become a social gaming powerhouse in emerging markets, the company announced today.

The Istanbul-based company has also acquired two small game studios in Turkey and now ranks among the top social gaming companies on Facebook, according to AppData. The company’s growth reflects the rapid growth of Facebook and social gaming in markets such as Turkey, the Middle East, North Africa, South America, and Mexico.

Peak Games is expanding by acquiring game studios Umaykut and Erlikhan, which the company described as “talent acquisitions.” It is also going to distribute RockYou’s social games in the Middle East and translate its titles into local languages.

“Our goal is to be the dominant provider of games for emerging markets,” said Rina Onur, chief strategy officer at Peak, in an interview.

From Dec. 2010 through June 2011, revenues grew 5,980 percent. During that same time, daily active users and monthly active users tripled. The average session for its games is three hours per user. The company’s most popular game, Okey, based on an old board game, has been played 1.4 billion times to date and has seen 18 million installs.

The funding came from Earlybird Venture Capital, Hummingbird Ventures and an unnamed strategic investor. That brings the total amount raised to date to $19 million.

Sidar Sahin, chief executive and founder, said the company knows how to get users in specific regions and how to monetize them. 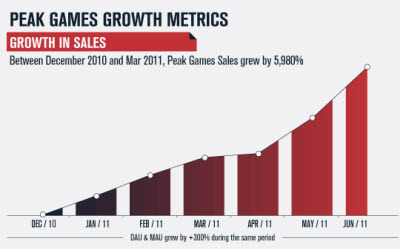 The company’s early games were based on traditional Turkish and Arabic card and board games, but now the company has created games that target both hardcore gamers and women and girls. Trendkiz, a fashion and styling game, targets the latter group.

Since Peak Games understands its local markets, it has created a good business localizing popular titles from other publishers.

The growth of Facebook has fueled Peak Games’ business. Turkey is the fourth-largest Facebook market, with more than 30 million users, reaching about 87 percent of the local online population. Over the past six months, the number of users in Turkey has grown by 30 percent. It is forecast to hit 250 million users by 2015 in the Middle East region.

“The growth has been huge in the last six months,” Onur said. “These regions are growing super fast and they are very hungry for games.”.

Peak Games has offices in Istanbul and Ankara, Turkey; Amman, Jordan; Barcelona, Spain; Berlin, Germany; and San Francisco. Peak Games was founded in 2010 and has more than 90 employees. Onur said the company will be on mobile game platforms soon.