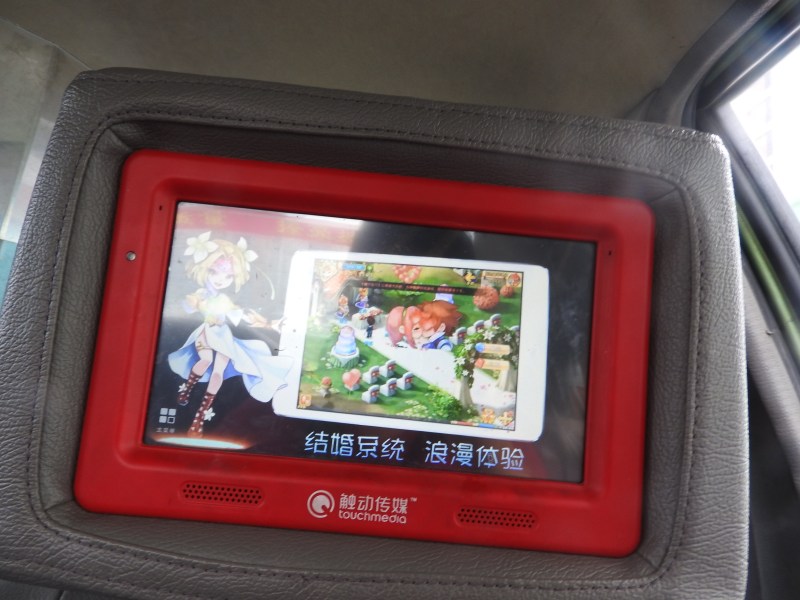 Above: A Perfect World tablet game, advertised in the back of a Shanghai cab.

GamesBeat: Is that because of the game brands you’ve brought?

Xiao: Partially, yes. But you come back to the fundamentals. We’ve developed several good quality games. That, plus our brands, and our publishing strategy, and our distribution strategy, and our partnerships—Many factors combine into a successful business so far. The next question is, how do we get into the global market? We’re starting to try that out in the mobile sector.

GamesBeat: What’s your impression of China Joy this year, and how it’s grown as well?

Xiao: It’s getting bigger, more crowded, hotter. We have more and more participants in terms of game companies. The development community has gotten bigger and bigger over the last 10 years. This is almost the second-largest game show in the world now. It’s the second or third. It’s been an impressive run, and it can get much better. There’s room to improve, but every year I see progress.

GamesBeat: The government official I heard was talking a lot about encouraging game companies to think globally – to make games that include Chinese culture, but also approach the world in some way. What are your thoughts about the potential your self-produced games have to get out into the wider market?

Xiao: The government is doing a lot of surveys on the industry and encouraging the industry to move globally. We’re leading the pack, I have to say. For us, it’s not only about Chinese IP. It’s about using a blended culture. If I could use a maybe not-so-appropriate comparison, it’s like the Hollywood way. Mulan was a traditional Chinese story and a traditional Chinese character fit into an animation product that could appeal to a global audience. Things like Chinese kung fu and the Chinese symbol of the panda became Hollywood products that were accepted on a global basis.

That’s the right way to do it. It doesn’t matter exactly where the thing comes from, whatever cultural element you’re using. The way you use that cultural element, plus a modern process of production, plus a value expression that fits with the majority of consumers’ needs globally—That’s what I call a globalized view. We will use a lot of Chinese elements, as well as a lot of American elements, in different projects with different teams.

We want to do global development. Say I have a Chinese cultural element. I’ll use a Japanese artist who understands this element to form it into characters. I’ll use American designers to build the storyline and design the interaction with the game. I’ll use technologists in China to create the servers and the engine. I’ll use the Chengdu team to mass-produce graphical assets. That all combines to form a true global project. 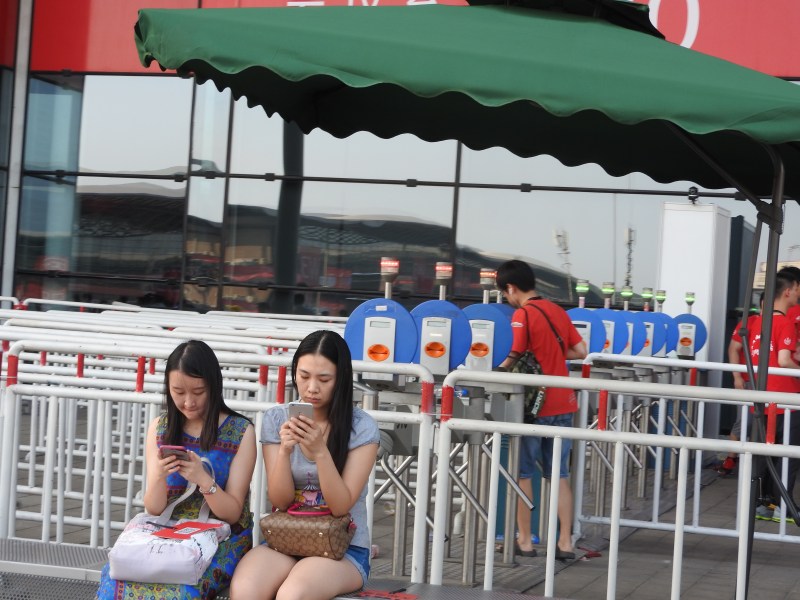 Above: Attendees take a break on their mobile phones at ChinaJoy 2015.

GamesBeat: Phil Spencer at Xbox was talking about his definition of success as a Chinese-made game designed in China for Chinese audiences being successful on a global scale.

Xiao: I’m happy he mentioned our name, too. We’ve made good progress and had initial success on Xbox One with Neverwinter. Of course, Neverwinter is a U.S. property and it was designed as a mainstream U.S. game. We’ve tried to launch it in China, even though Xbox One hardware sales in China haven’t been satisfying so far. Out of all the games now running in China on Xbox One, Neverwinter is showing some of the best statistics. It’s been accepted by the gamers who play it.

GamesBeat: Console sales are expanding across the whole nation now. Are you more optimistic?

Xiao: I’ve always been optimistic. It’s just a matter of time. Sooner or later consoles will be everywhere in China, and it’ll be a brand-new market. It’ll give global platform players like Microsoft and Sony a good return. The tactics they use to sell hardware will make a difference. Once you reach a certain amount of hardware, your whole ecosystem can start running. They haven’t reached the threshold yet.

GamesBeat: You have to plan for a more gradual expansion?

Xiao: Exactly. It’s about long-term planning. In the next two to three years it’ll be there. It’s just a question of how. We’re trying, in our capacity, to do what we can do in terms of perfecting the game and working with our partners to find the best way to fit in the Chinese consumer market. For them it’s more of a question of how to boost hardware sales.

GamesBeat: How many people work for you now, globally?

Xiao: About 5,000. I have several projects ongoing for the Chinese market, although I can’t give detailed numbers. Not two, not three, but several console products being developed globally – in the U.S., in China, everywhere.