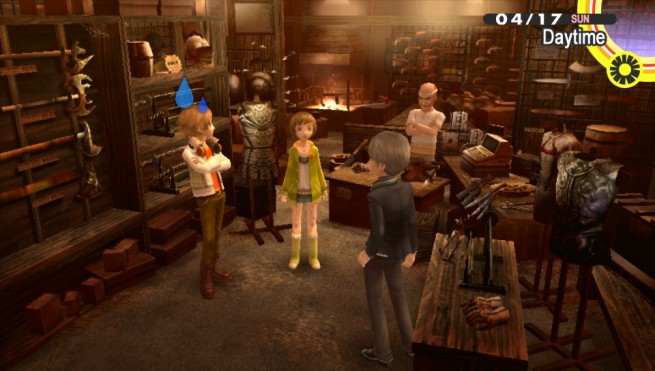 Turning a completely single-player game into a multiplayer experience doesn’t have to suck, but most of the time developers choose the quickest and most jarring and disruptive options. Persona 4: Golden proves that you can introduce an online community into an offline world without shoving in unnecessary options like competitive battles.

But Persona 4: Golden is much more than online connectivity. With all-new characters, items, and locations, the Yasogami investigation team has a lot of work cut out for them as they look into a chain of grisly supernatural murders taking place in the sleepy rural town of Inaba.

Smart online components
Persona 4: Golden is all about subtle yet brilliant online flourishes. As you guide the main character through the murder mystery in his new high school, you can occasionally tap on a little bubble in the top-left corner of the Vita screen. Doing so pops up tons of messages revealing what other players did with their after-school hours. Since both versions of Persona 4 follow a fairly strict calendar schedule, succeeding at the game means carefully budgeting time day-by-day. Seeing what other players did might reveal new strategies or overlooked side quests.

But the online functionality isn’t limited to thought bubbles. Once you enter a dungeon in the TV world, you have the option of sending out an SOS message, similar to the notes you could leave in Demons’ Souls and Dark Souls. If you find yourself trapped in a dungeon with little to no healing capability or escape items, other players can find your SOS and heal your party.

This is that multiplayer component I mentioned before. Even though you are playing through the game on your own, the fact that you can fall back on other players when you’re in a tight spot is a very endearing and helpful mechanic. The developers didn’t have to work social and online components into Persona 4, but how they did it is completely unobtrusive, optional, and ultimately very useful if you take advantage of it. 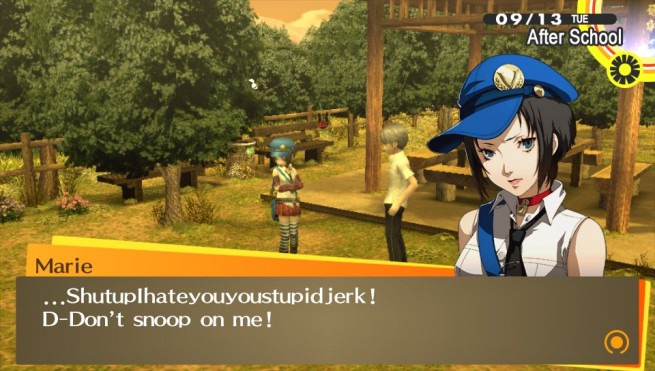 New content
If you’re concerned that Persona 4: Golden is just a port of a PlayStation 2 game, you worry too much. Atlus knows its fans and knows that new characters, scenarios, and explorable locations mean the world to players returning to their favorite games. So Persona 4: Golden is simply bursting with new content.

The one most notable changes, besides the online connectivity, is the inclusion of a new side-story character named Marie. She’s a grumpy yet intriguing girl who doesn’t seem to like the protagonist much when you first meet her, but eventually she softens. Marie’s story is integral to many new components in Persona 4: Golden, so hanging out with her is an absolute must if you’ve played the game previously.

Players also have the option of exploring a new neighboring town called Okina after they learn how to ride motorized scooters. This gives you access to more shops and unlockable goodies. You can even buy new outfits to wear when you’re exploring dungeons in the TV world, some of which are very silly.

More forgiving dungeon mechanics
When you die in the original Persona 4, you start from your last save. This is a frustrating role-playing game holdover from the dark days before autosaving. Every gamer probably has a horror story about finally making it through a tough dungeon only to die in a boss fight before saving their progress.

Well, Persona 4: Golden breaks the save-reload tradition by letting players start from the beginning of the floor or stage of the dungeon they died on. So, if you perish in a boss fight, you’ll pop up just outside the doors leading to the fight in the same condition you were in before the battle started. This is a lifesaver, especially when you realize how unprepared you were for the boss in the first place.

The developers also tweaked Persona’s card-based battle reward system. After some battles, players get the chance to pull a tarot card from a spinning deck that gives them a new creature to summon in battle or various stat boosts. Originally, you would look at the cards and try to keep an eye on the one you wanted as they shuffled in front of you.

In Persona 4: Golden, the cards shuffle before you see them and now have various secondary effects. Some cards diminish how much money or experience you earn in a fight, but choosing that card might grant you the chance to pull two more from the deck. Since new Personas are often found in the shuffle, sometimes taking a debuff can lead to a greater reward. 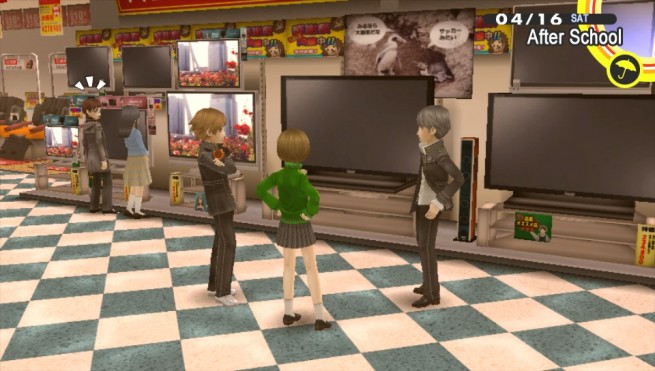 Chie’s new voice
When Chie Satonaka’s voice changed for the Xbox 360 and PlayStation 3 fighting game Persona 4 Arena, I feared that the new version would make its way into the Vita rerelease. With all the added content in Persona 4: Golden, the localization team opted to rerecord all of Chie’s lines with the same voice actress from Arena, and in so doing irreversibly changed how players will think about the character.

I’ll be honest. I wasn’t crazy about Chie’s original voice. She was sometimes a little too hammy, but when she needed to sound terse or extremely emotional, all her lines fell into place. The new sound is very jarring and cloyingly bubbly compared to the tough, Kung Fu movie-loving girl in the PS2’s Persona 4.

This change probably won’t bother people playing through Persona 4 for the first time on Vita, but returning fans will likely wrestle with the difference. Rather than sounding very commanding about her meat infatuation, new Chie is whiny and overtly girly despite her interests. The new voice simply doesn’t fit when compared to the old one.

But Atlus’s only alternative was to just add new dialogue to the game and leave a glaring vocal discrepancy between the original voice actress and the new one. So rerecording everything makes sense, but it doesn’t mean I have to like it.

Seemingly endless exposition
This complaint is a holdover from the game’s original PS2 release, but Persona 4: Golden takes forever to get going. If you want an RPG you can hop into quickly, I suggest you avoid the Shin Megami Tensei series entirely.

The beginning of Persona 4: Golden is a 90-minute-to-three-hour slog through the main character’s arrival in the rural town Inaba and an introduction to the murder mystery hanging over the populace. Along the way, you meet the first three members of your party, realize Chie has an unhealthy obsession with steak, and fall into a television. None of that seems dull, but for most of this introduction, you’ll be clicking through dialogue screens and moving through scripted events instead of exploring the world.

Even though Persona 4: Golden is a fantastic adventure, heavy exposition is frustrating for many players and will certainly turn away some prospective Vita owners looking to break into the series. Japanese-RPG fans sometimes accept these narrative tools too quickly and forget that not everyone wants to watch a game play itself for hours at a time.

Persona 4: Golden is a beautiful and content-rich bundle of joy for Vita owners looking to dust off their woefully undersupported handhelds. The subtle incorporation of new characters, scenarios, and even online connectivity takes full advantage of the new hardware without compromising content or story quality.

But Persona 4 isn’t for the faint of heart. Playing it is a very long but ultimately rewarding journey full of unforgettable characters. It’s just a shame that Chie’s new voice can sometimes distract from her depth and place in the story.

Persona 4: Golden was released on the PlayStation Vita on November 20, 2012. Atlus provided a digital download code for this review.