I love Japanese role-playing games. I have a mental list of my favorites: Final Fantasy IX, Chrono Trigger, Suikoden II, and Persona 4.

I need to make some room on that list.

After 9 years of Persona 4 spin-offs, Atlus is releasing the bonafide sequel in the U.S. on April 4 for PlayStation 4 and PlayStation 3 (I played the PS4 version). Persona 4 was one of my favorite Japanese role-playing games. Its mix of dungeon-crawling and social-life planning made for a captivating and rich experience filled with intertwining and deep systems. It was hard to imagine how a sequel could live up to it without delivering more of the same.

And, sure, Persona 5 does have a lot of the same. But it also makes some smart changes, adds some conveniences, and looks better. The result is an RPG that’s full of style and confidence. Persona 5 knows that it’s special, and you’ll soon know it, too. 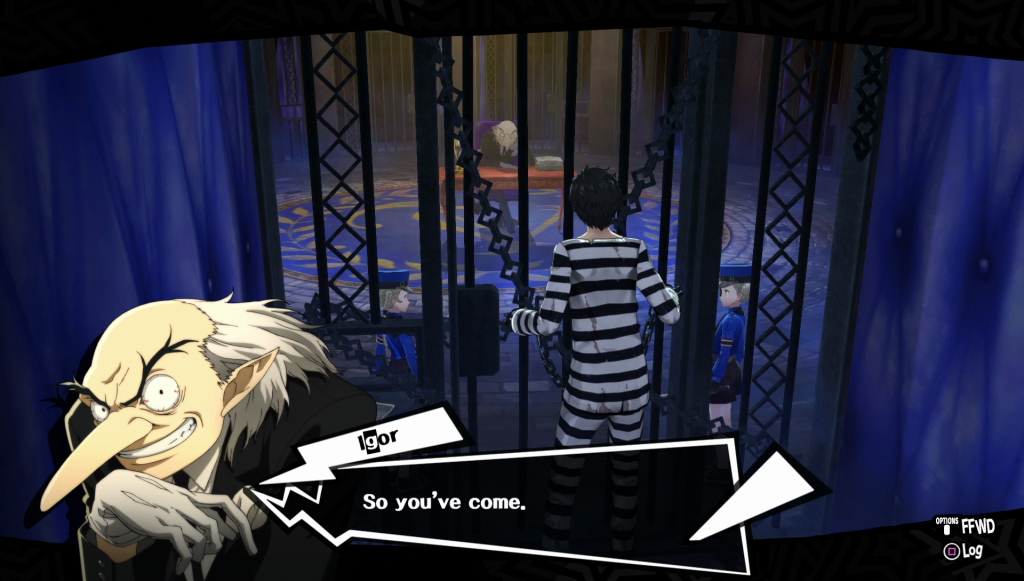 Above: A prisoner of your own heart … or something. Hey, it’s Igor!

Structurally, Persona 5 is similar to its predecessors, Persona 3 and Persona 4. Now, those are some of the best JRPGs of the 21st century, so it’s not a bad formula. It mixes dungeon exploration and the turn-based battles that come with it with a life simulator that has you planning the daily activities of a teenage boy living in Japan (in this one, specifically Tokyo).

These two activities seem different, but they are interlinked. Hanging out with people in the real world builds relationships. These bonds then make you stronger in the Metaverse, the alternate world where you do all of your fighting. Spending time with a party member more will let them do extra things to help in battle, like stepping in for a free follow-up attack.

Relationships also help you create more powerful Personas. These are the supernatural creatures that provide spells and most of your special abilities. You can collect Personas during battles, and you can also fuse them together to create new, more powerful demons (or shadows … or monsters … or Personas, whatever you want to call them). Each Persona belongs to a different category responding to the different Arcanas of Tarot cards, like Lovers, Chariot, or Death. Each of you real-world relationships also has a corresponding Arcana. As you forge those relationships, Personas you create from those same Arcanas will get a boost in experience points, making them stronger.

So, yeah, this is already sounding pretty complicated. And that’s the beauty of this Persona formula; it’s complicated. But that also means it’s filled with depth. Every choice you make and every way you choose to spend your day is important. Even answering a random question in class correctly will give you a small boost to your Knowledge stat, which could help you forge new friendships and get a better score on your exams. So far, what I just described would fit for Persona 4, or Persona 3. It seems like a complicated blueprint that couldn’t take much tinkering, but Persona 5 does feature smart additions. Most of these happen in the dungeon-exploring and fighting areas, such as how you acquire new Personas. Before, you would play the “pearl under the clamshell” game with different cards, some which would sometimes give you a Persona. It wasn’t the most elegant way to earn them.

Persona 5 goes back to the series’ roots to find a better solution. If you want a Persona to join you, you have to talk them into it. Demon negotiating was a staple of the Shin Megami Tensei series that Persona spun off from. The first Persona and Persona 2 kept the system intact before Persona 3 abandoned it.

Just like in Persona 3 and Persona 4, you can exploit enemy weakness to gain extra attacks. This also knocks them all down to the ground. If you knock all enemies down, you attack the group for a lot of damage. But in Persona 5, this is also when you can talk to them. You can demand items, money, or ask them to join you. You’ll then have to answer some of their questions. Depending on how much they like your answers, you’ll add them to your roster or you’ll have to go back to fighting them.

Now, this negotiating system does have the same problem it always had before. It can be a bit obtuse. It’s sometimes impossible to know what to say to make them happy, forcing you to occasionally rely on trial-and-error. But it’s a much more interactive and interesting system than tracking shuffling cards, and it makes it easier to target the exact Persona you want since you aren’t getting random options. 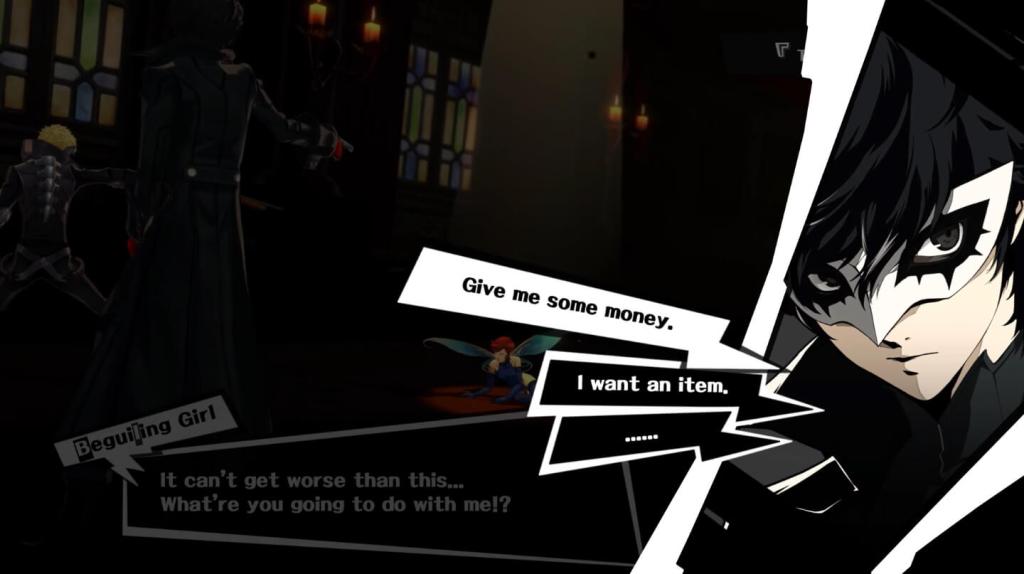 You also have a few new tricks in battles. Along with regular melee attacks, each character has some kind of a firearm. One has a shotgun, another has a Tommy gun, and so on. When you go into shooting mood, you can fire multiple times at several targets. And, just like melee attacks or spells, some enemies will be weak to these projectiles.

These are strong attacks, but they cost ammo. You can only regain ammo after leaving a dungeon for the day. It gives you another important resource to think about. Sure, you could fire six shots right into one tough enemy to deal a little extra damage, but you could be in trouble later when you need bullets to exploit a specific weakness.

Exploiting those weaknesses is also a little easier thanks to the Baton Pass. This enables another party member take your extra turn after you knock an enemy down. It makes it simpler to exploit every enemy’s weakness in one turn, since different party members will have different spells. Allies who take the Baton Pass also get a bonus to attack power. 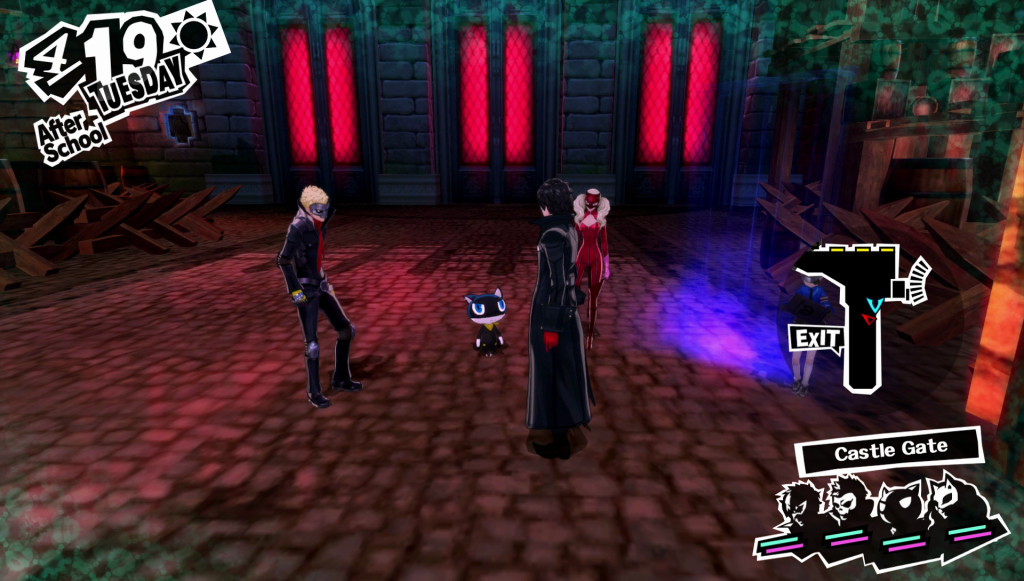 Above: Planning your infiltration.

The dungeons themselves are different in Persona 5. In Persona 3 and Persona 4, they were randomly generated labyrinths. The goal was to climb up the tower and through them, looking for the stairs to each floor. Persona 5’s main dungeons are not random. Each has a set layout, and they’re more linear.

That might sound like a downgrade, but these dungeons have a lot more personality. Since they aren’t made of rooms that have to fit together like puzzle pieces, their layouts and design can feel like real places. It also lets you explore distinct areas, like climbing the outside of a building or running across chandeliers to get from one balcony to another.

These dungeons also have a much greater emphasis on stealth. You’re not exploring a dungeon — you’re “infiltrating” it. Persona 3 has a paranormal, Twilight Zone thing going. Persona 4 is more of a murder mystery. Persona 5 is about thieves and heists. So, it’s important to remain undetected. You can take cover and move around it. Sneaking up on an enemy won’t just open them up to an attack, it’ll also keep your alert meter low. This goes up every time an enemy spots you, and it goes down every time you get the drop on them instead. If it reaches 100 percent, it kicks you out of the dungeon. It all makes exploring these areas more tense and interesting.

And if you like the random dungeons, Persona 5 still has a place that features such layouts. Mementos is another location where you can explore and fight demons, and it has a structure that’ll feel familiar to fans of Persona 3’s Tartarus (the big tower that serves as its only dungeon). 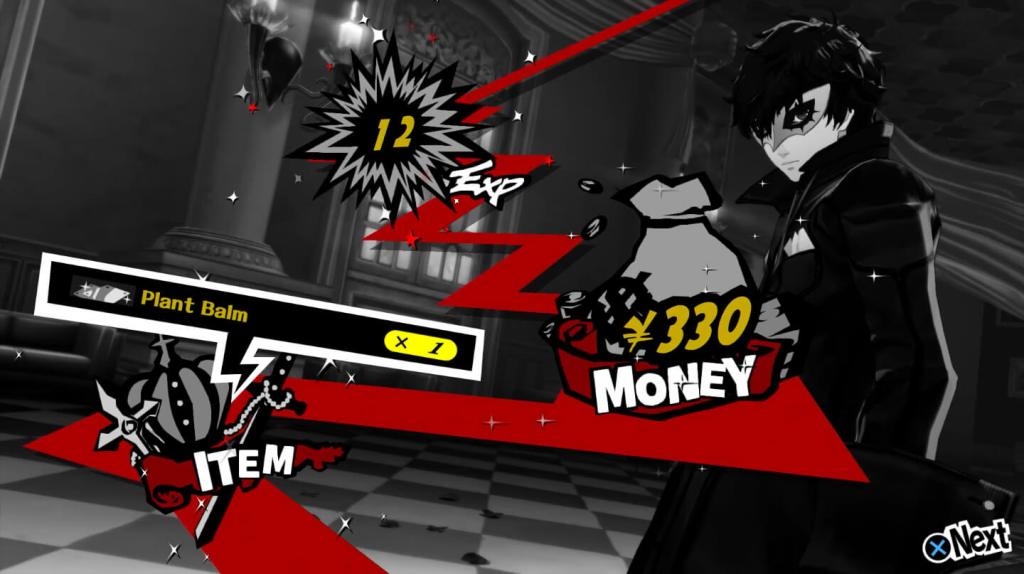 Above: The victory screen even looks pretty.

Persona 5 is beautiful. It abandons the more cartoon-like proportions of Persona 3 and Persona 4 and adopts the style that looks just a bit more mature while retaining that anime look. Despite being turn-based, battles are bursting with energy. Things that are usually dull or utilitarian, like the battle menus, pop with flashy designs and animations. Even the battle report screen at the end of each fight looks great with its pop art-like graphics.

It also sports another phenomenal Persona soundtrack. It mixes Japanese pop with jazz and other unusual genres, creating a unique voice that sets perfect moods for walking around a rainy shopping district or fighting some giant monster. Above: Even batting practice can make you stronger.

Persona 5 is complex. It will take you around 100 hours to finish. And none of this feels like filler. That’s great, but it can also make you feel a little anxious. You can only do so much each day, and you’ll sometimes worry you won’t get to accomplish everything you want to before the credits roll. You’ll learn how to maximize your planning as much as you can, but you’ll feel like you’re not being as proficient as you could be. There’s always an “ideal path,” a way to plan your days that will enable you to accomplish everything, but you’ll usually need to find a guide in order to know how to achieve it.

Without giving away anything of the story, Persona 5’s narrative will often jump forward to a specific point in time, and then quickly take you back to where it interrupted. It’s an unnecessary narrative tool that disrupts the story more than it serves it. Persona 4 is such a beautiful RPG that it seemed like an impossible task to ask any sequel to surpass it, but Persona 5 manages to keep the series’ conceits working while adding meaningful improvements. Dungeons are more fun to explore and you have more options in battles. Other, smaller quality-of-life changes make things easier, like getting texts from friends when they want to hang out.

This is a deep and gorgeous RPG that’s slicker than Fonzie after wrestling with an oiled pig. If you loved Persona 3 or Persona 4, you’re going to be ecstatic with how Persona 5 keeps the momentum going and delivers one of the greatest JRPG experiences of all time.

Persona 4 comes out on April 4 for PlayStation 4 and PlayStation 3. Atlus provided GamesBeat with a digital PS4 copy of the game for the purposes of this review.