Despite my love for the Persona series, I wasn’t excited for Persona 5 Strikers. As soon as I found out that this spinoff was taking inspiration from Koei Tecmo’s Dynasty Warriors series, with direct help from the studio behind those games, I lost interest. I never cared for Dynasty Warriors, even when Nintendo marries franchises like Zelda or Fire Emblem to the formula.

Persona 5 Strikers, however, is surprising. It’s much more Persona than it is Dynasty Warriors. It feels like a Persona 5 sequel, just with the combat switching from turn-based battles to real-time action.

Strikers comes out February 23 for PlayStation 4, Switch, and PC. I played the PS4 version on my PlayStation 5.

The game brings back the cast from Persona 5 a few months after the end of that game, sending them on a road trip across Japan as they enter metaphysical worlds and save people robbed of their free will. At first, I found this premise a bit dull. It’s a similar setup to the last game, and as much as I like these characters, they’ve already gone through their arcs. The start is slow, spending too much time setting up the plot (which isn’t all that complicated) and reintroducing the characters.

Persona games always have slow openings. Usually, I’m fine with that, but it was a bit annoying here. I wanted to try out the new combat system. After a brief intro to the real-time fighting via a tutorial at the start, I had to wait too long to get into an actual battle.

But Persona 5 Strikers picks up after you gain access to your first dungeon. For one thing, you finally get to beat enemies up. You also get introduced to one of the game’s new characters, Sophia. She’s an AI, and she gives the story a person to follow who actually has some emotional growing to do. Sure, it’s the typical “robot learns about humanity” trope, but I’m a sucker for that kind of thing (you can probably blame Star Trek: The Next Generation and Data for that). 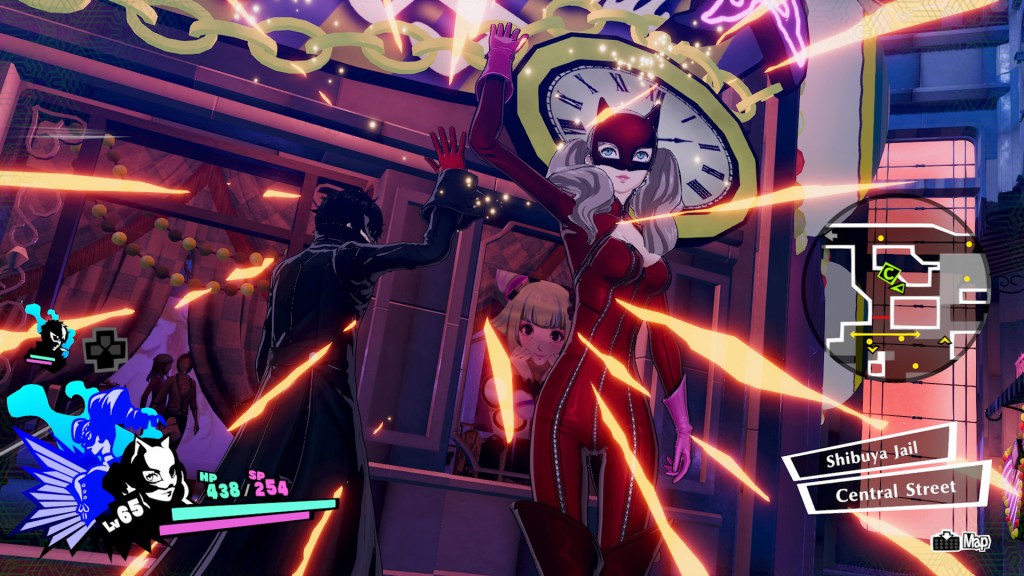 Combat is what really won me over. I was worried that Persona 5 Strikers would be a basic hack-‘n’-slash. Instead, the fighting works much as it does in other Persona games. You still have to take advantage of enemy weaknesses if you want to win battles without too much hassle.

The fighting feels great. Each character has their own style. Haru uses an axe, making her attacks slower but strong. Makoto can can string together fast combos (and ride a motorcycle through enemies, which is just great). Joker, the main character, has access to multiple Personas, meaning he can use more abilities than the others. And just like with Persona 5, you’ll be switching between characters and Personas often to take advantage of their strengths when the situation calls for them. The fighting is fast-paced, but you’re not spamming buttons. You need to be careful about committing yourself to long combos that can leave you open to attack, and you also want to spend some time casting spells between the beatdowns.

While Dynasty Warriors puts players into large, open maps with armies of enemies available for the pummeling, fights in Persona 5 Strikers are smaller. Taking down a couple dozen enemies at once is more than you may be used to in a typical JRPG, but it’s rare that you fight massive hordes like you would in Dynasty Warriors. This relieved me. I always find it hard to focus on much aside from spamming combos when I’m fighting those giant Dynasty Warriors armies. Strikers throws enough enemies at you to keep things interesting, but the action doesn’t feel cluttered.

In fact, the boss fights are the best battles, and these usually just have you fighting one giant enemy. Success depends on your capability to dodge attacks, exploit weaknesses, and keeping you party healthy. It’s when the marriage of Persona 5 with real-time action feels its strongest. 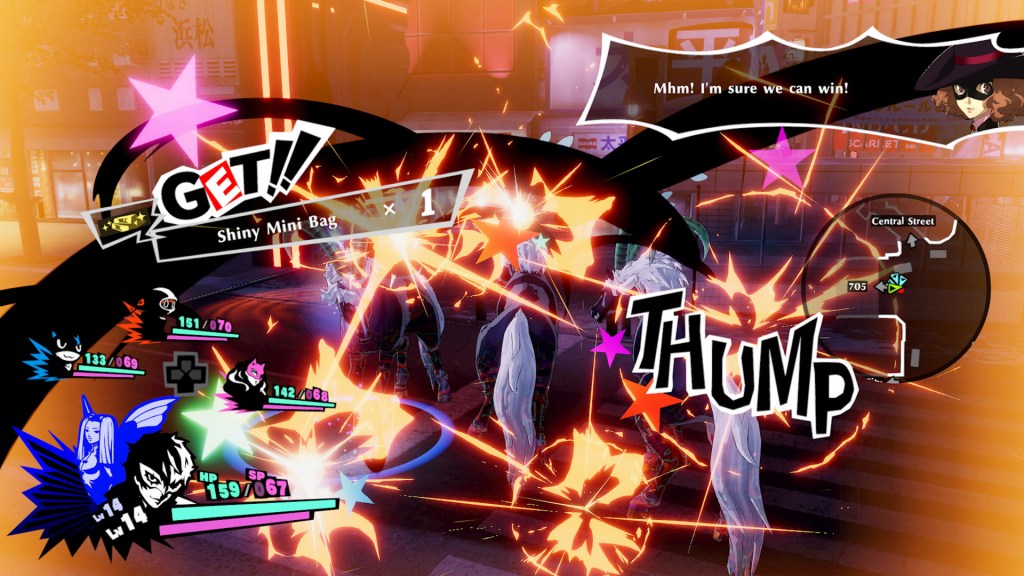 Above: Free for all brawls.

Persona 5 Strikers does not feel like Dynasty Warriors. That’s a relief. Strikers is just more Persona 5. It looks and sounds just like its predecessor. It just has a different combat system, but even that takes its queues from Persona 5.

Now, Strikers isn’t exactly on the same scope as a full-blown Persona game. The social aspects aren’t as robust. You aren’t forging relationships with your characters or eating beef bowls to increase your personality stats. And it’s not as long. Persona 5 may take you about 100 hours to beat. Strikers took me a bit over 30 hours to complete. I’m not going to complain about that, though. That felt like a good length for an action role-playing game, and it makes sense that the experience would be a bit shorter without the calendar events that can fill out a normal Persona game (you aren’t studying for tests or picking up after-school jobs).

But you’re still collecting Personas and fusing them to make new ones. You’re still rocking out to an amazing soundtrack (which includes a nice collection of new songs and remixed tunes from Persona 5). If you liked Persona 5, you’re still going to have a great time.

I’m not sure if you should call Persona 5 Strikers a spinoff or a sequel. Honestly, it feels more like the latter. But if you want to call it a spinoff, it’s the best one that the Persona series has offered yet.

Persona 5 Strikers comes out on February 23 for PlayStation 4, Switch, and PC. The publisher gave us a PS4 code for this review