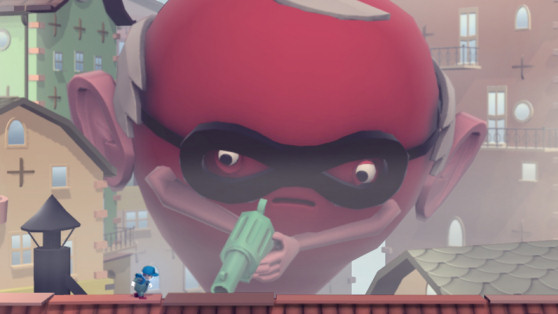 The biggest puzzle-platformers of recent years — like Limbo and Super Meat Boy — are punishing in their difficulty. Take even a single hit and it’s game over. They’re also endlessly creative, constantly testing players with new angles on previous challenges and surprises in gameplay. Now, Might and Delight’s debut title Pid, or Planet in Distress (out today for Xbox Live Arcade and Steam), seeks to reproduce that winning formula as it leaves the fate of a world with a young boy.

Otherworldly colors and sounds
All Kurt wants to do is go home. When the bus drops him off at a remote planet by accident, he learns the return trip will take a little longer — traffic to and from the planet has completely stopped, save for its newest little visitor. The boy proceeds to explore his surroundings only to become embroiled in a conflict that concerns the welfare of the planet and its robot inhabitants, who are helpless to the changes and evil-doings going on around them.

Life on the planet might be tragic, but the sights and sounds are wonderful. The game begins (and ends) with a wordless series of illustrations set to sound, which gives the story its context and mood. From there, Kurt journeys to locations like an old castle, an opera house, and an eerie cave and underground maze. The colors are gorgeous, especially in areas outdoors; the hazy palette blends together beautifully even as each part of the environment stands out from the rest. This effect gives Pid a sense of childlike wonder, like we’re viewing these scenes through a veil of starlight. It helps to emphasize how brave one small boy can be to take on a mission this big. Kurt has amazing spirit, and his determination to find a way home brings hope and aid to a desperate people.

His adventure unfolds to the beat of an excellent soundtrack, which seems to reinvent itself each time Kurt discovers a new region of the planet. The drums, bass, guitar, and saxophone come together in an easygoing and energetic way — it’s not intrusive, but it’s as hard to ignore as the ever-changing, gorgeous environments. 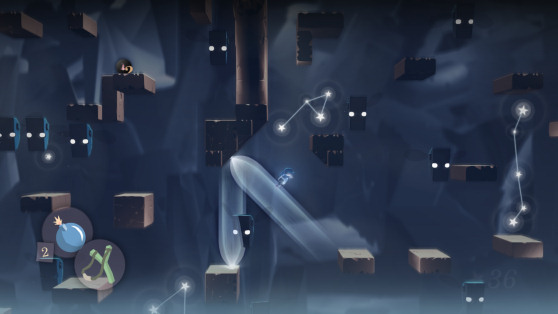 Challenge for one player or two
Pid is tough even on Normal, the only available difficulty setting at the start (the other is Hard, which you unlock upon completion). Luckily, the game lets you power through its stressful scenarios with a friend, a preferable way to play any puzzle-platformer of this caliber.

And this one has plenty of challenges and content. I clocked in just shy of 15 hours, but only after dying 648 times, according to the end-of-game stats. Puzzles require the use of your growing inventory of weapons and items — the beam, which bounces off walls and can float you in any direction; bombs and timed bombs; the slingshot, for when you need to trigger a beam on a distant surface; and more — but the tasks always differ. Pid even introduces new enemies and traps toward the end (like the flying black domino-shaped foes pictured above, which cling to your light beams), a rarity for some puzzle-platformers.

Unforgiving gameplay
While Pid can be fun at times, be prepared for it to wear heavily on your patience and tolerance for frustration. As hard as the puzzles are, the bosses are even tougher. You’ll face six of them, and each is more aggravating than the last. You can spend most of your time during these fights just surviving and only whittle away at the boss’s health before dying. The mechanics are imprecise — one showdown, for example, involves climbing your opponent’s shoulder while avoiding missiles, but Kurt can get stuck on his anatomy. More than one confrontation turns into a chase scene, and another requires you to make a perfect landing or else spend minutes doing little more than avoiding enemies and their fire. The chances of dying are great, and they’re too slim for success.

It wouldn’t be as much of a problem if the game stocked you up on health at the start of a fight, but too often you have little to no armor by the time you reach the boss. You can buy life vests at vending machines, trading in the star constellations you collect (which play a greater role in the story), but it’s easy to lose them as you take damage. Considering the duration of these battles, a little extra health could go a long way. 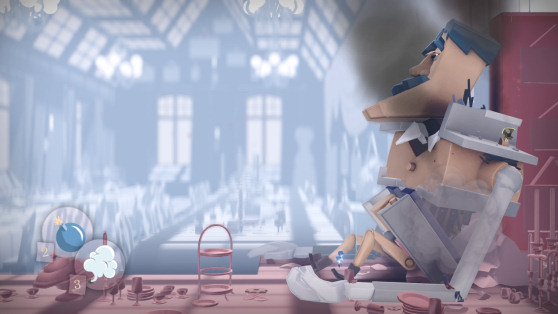 Occasional drops in quality
As hard as Pid works to keep play fresh and interesting, it’s not immune to repeating the same tricks. A good handful of scenes could have been cut, and it’s here that players will notice the repetition — too many laser-based or missile-based obstacle courses set back to back, for instance, with no scenic view.

Pid also resorts to a few fetch quests, but it’s better off without them. They only feel misplaced in a game that’s largely about pressing forward, not running around in circles, lost. If players have to repeat rooms they already died on just to gather X number of batteries, that’s when they abandon the game.

In addition, while Pid has a strong checkpoint system — crucial for puzzle-platformers where the player death count is in the hundreds — half the time it never works the way you need it to. It might, for instance, reload the game at a previous scene or start the player off at a point they’ve long passed.

Pid is just as atmospheric as Fez and as grueling as Braid, but it’s the little details of its execution that keep it from flawlessness. An Easy mode would be a huge boon if only the developer had added one; the boss fights are unnecessarily tedious and slow; and the health and item system is too unreliable (why spend stars when you’re just going to lose your new power-ups before the real trouble hits?).

But it is a quality puzzle-platformer, and one with excellent narrative, graphics, and music. Most of the mistakes you make belong to you, not Pid — no matter how much you swear at it.

Pid was released for Xbox Live Arcade and Steam on Oct. 31. The publisher provided GamesBeat with an XBLA code of the game for the purpose of this review.