Into the Dead was a smashing success from 2012, where your job was to avoid running into zombies on a speed path. Now New Zealand mobile game publisher PikPok is launching Into the Dead 2 on October 13 on Android and iOS.

Into the Dead has more than 70 million times. The gruesome game was a simple endless runner, where you had to swipe in different directions to avoid the bloody embrace of zombies. You can sign up now.

Kanna Yamasaki, a marketing associate at PikPok, showed me the new free-to-play Into the Dead 2 at the recent Casual Connect event in Seattle, and I played it again today. I found it quite easy to learn, but it was hard to avoid the zombies for a long period of time. It’s the sort of game where you have endless failures and an occasional success that allows you to advance further into the gameplay. You have to master the nuances of the touchscreen for both moving and shooting.

“There’s a narrative arc to the game now, and it has multiple endings that depend on the decisions you make,” Yamasaki said.

Back in 2012, the good visuals and gameplay were novel. But now the mobile scene has hundreds of zombie apocalypse endless runner games. So this time, PikPok created a deeper story, more variety of gameplay, an arsenal of weapons, and challenging terrain, such as farms, oil fields, and military bases. You have to move from one safe haven to another to escape the zombies. 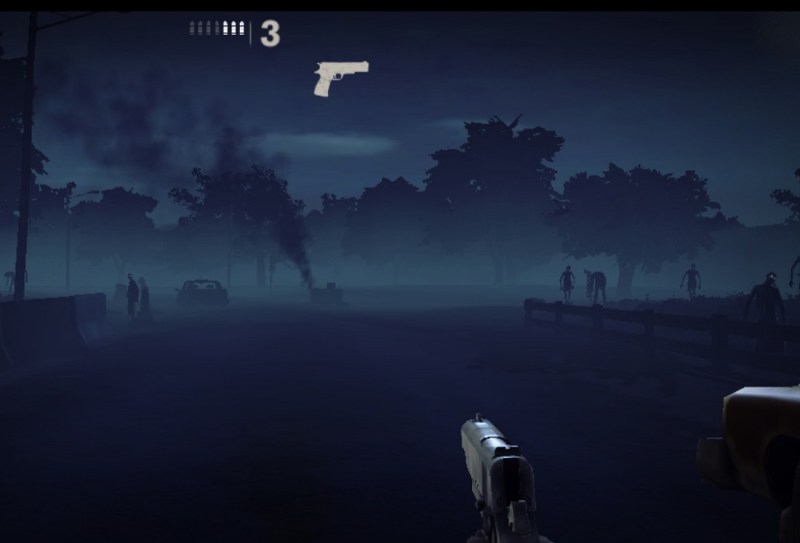 Above: Into the Dead 2 starts out quiet, in the fog.

You can pick up weapons along the way and fend off ever-increasing zombie threats. The terrain also gets harder to traverse. Your only path to safety is to keep moving. Your goal is to save your family. If you’re caught, the zombies eat you. It has seven chapters, 60 stages, and hundreds of challenges. You can upgrade your firearms and move into different gameplay modes, like firing from gun emplacements or slaying hordes from atop vehicles.

Into the Dead 2 has canine companions to help you dispatch the zombies, and there are a lot of cinematic cutscenes as well. It will also have daily and special event modes, which can get people to come back to prove their skills and win prizes. The game has video ads that provide ways for the company to monetize it.

PikPok has been around in Wellington, New Zealand, making games for two decades. Mario Wynands, Stuart Middleton, Tyrone McAuley founded a company (Sidhe) to make games for the original PlayStation. The worked on titles such as Oneil Championship Surfer, Adidas Football Fever, and Rugby Challenge. Their sibling company, PikPok, created games like Flick Kick Football and Monsters Ate my Condo in mobile games. By 2012, PikPok became the main brand for the company.

“Into the Dead has been a huge success for the studio, reaching tens of millions of players across a myriad of platforms” said Wynands, managing director of PikPok, in a statement. “Continuing the franchise with Into the Dead 2, we’ve massively expanded on the concepts explored in the original, adding much more content, depth, and longevity that will appeal to existing fans and new players alike. The release of the game is a huge and satisfying milestone for PikPok.”