Pillars of Eternity’s roots may reach into the old Icewind Dale role-playing series, but many of its systems aren’t exactly a carbon copy of Advanced Dungeons & Dragons — or even modern D&D.

This is most apparent in the armor system, which abandons the old Armor Class defense system from the Icewind Dale games (which Obsidian Entertainment’s progenitor, Black Isle Studios, worked on). According to game director and lead designer Josh Sawyer, a concept that took its inspiration from a mix of D&D 3.5 and 4th editions — but in some cases veers away from those — also has a name that brings most gamers into Star Trek, not fantasy.

Armor is one of the systems in Pillars of Eternity that drift from D&D — one among many that Sawyer and his fellow designers crafted from scratch, something that he and Obsidian has never done before.

“Our armor system is based on ablating damage rather than ablating being hit,” said Sawyer in a recent GamesBeat interview over Skype. If that sounds familiar to you, it’s because Star Trek: Deep Space Nine‘s little ship that could, the Defiant, also used ablative armor. This is the first time I’ve seen ablative — think of the process applied to the material that protects space vehicles upon reentry — used in connection with a RPG (PC or otherwise).

But how do they see?

The Death Godlike oozes mystery thanks to the growths on their faces.

So, what does “ablative” mean in terms of Pillars of Eternity’s armor?

“It’s reducing damage, minimizing or taking a portion of damage off, rather than preventing you from being hit. You could say it’s a subtractive armor system,” Sawyer said. “It does not use a percentage-based system because that tends to make the scaling of armor not feel as good, and in the long term, you eventually run out of runway from a systems perspective. You have 100 percentage points. Once you’re done with those percentage points, you’re done with armor.

“Our system [has] a flat integer value that gets subtractive from incoming damage, down to a minimum of 20 percent. You can’t become completely immune to damage, but you can reduce it by 80 percent.”

This permits strong attacks to get through lots of armor, while stalwart protection can render a series of fast but weak strikes less effective (sorry, dagger-wielding rogues!). But since the system is not based on percentages, it makes how you strike at different types of armor something that factors into your decisions in combat.

“It makes your choice of what type of attack to use against a character in certain armor a little more meaningful,” Sawyer said.

Pillars of Eternity’s combat also takes deflection into account, and this is where its D&D roots become more apparent. It’s “like your armor class,” Sawyer said. “Deflection is just the defense that gets attacked with most direct physical attacks. If you shoot an arrow or swing a sword or use a spell that targets one specific character and doesn’t affect the body or the mind of the target directly, then it’s going to be resisted by deflection.” 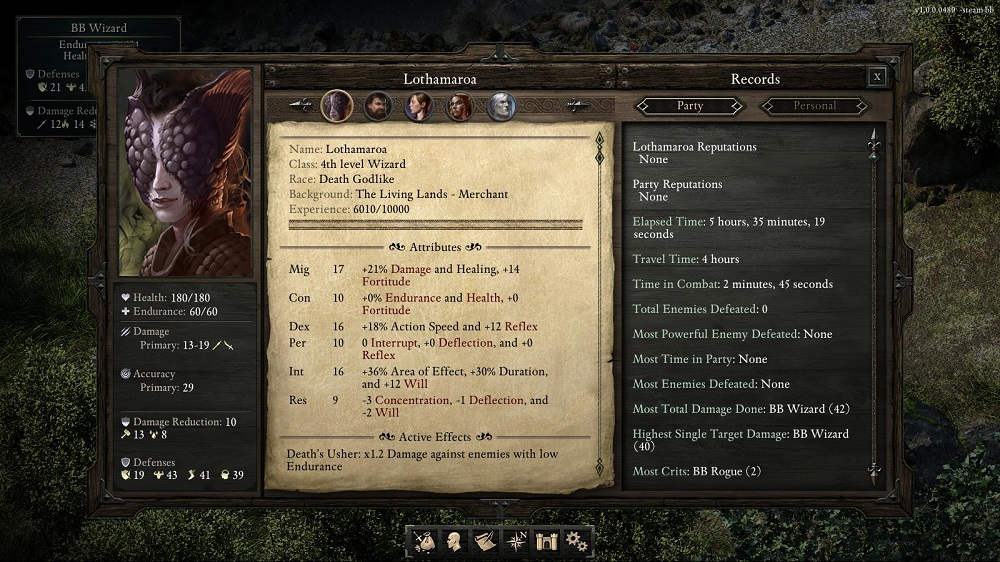 Above: You can see the four defenses in the lower left: deflection, fortitude, reflex, and will.

Attacks go up against one of four defenses. Deflection, as Sawyer noted, is for physical attacks. The others are fortitude, reflex, and will, “which again is very D&D,” he said.

This is how the combat works. Attacks are about accuracy versus defense. The higher the accuracy, Sawyer explained, the more easily you hit. And if you roll high enough, you get a critical hit. But instead of this being double-damage, it’s either an additional 50 percent damage or if it’s an attack with a duration, it lasts 50 percent longer.

You don’t need a solid hit to score damage.

“But because we also didn’t like the super-swingy nature of a lot of D&D combat, we also have something called a graze, which is not super-dissimilar from what you can see in a lot of 4E, where they have a miss effect, ” Sawyer said. “I use my daily, and I missed with it and that’s a huge bummer, but there’s still a miss effect that happens. We have a graze range that’s below a hit. That does 50 percent less damage or it reduces the duration by 50 percent. Those are the defenses.”

All of this plays off two stats: endurance and health. Think of endurance as “your short-term hit points,” Sawyer said. “Within a combat, your endurance can go down relatively quickly, much like someone getting beat on in D&D. The difference between Pillars and D&D is that when your endurance reaches zero, there’s not much of a chance of you dying because you also have a health pool that’s much higher. The idea there is that you can take a lot of abuse over the course of several combats before your character is really in danger of dying.”

This is a lot like 4E D&D‘s healing surges — an ability that restored one-quarter of your overall hit points — yet as Sawyer said, you have a pool of hit points that’s a lot larger than your endurance (and you don’t have to spend anything, too, as you do with a healing surge).

“In a fight, someone attacks your deflection. If they score high enough, they’ll hit you or crit you. You take damage to your endurance and your health. When your endurance hits zero, you’re knocked out, but you probably have a ton more health,” Sawyer said. “After a fight, you get up and you can keep going for the rest of the day.”

Just don’t expect to be the Black Knight from Monty Python and the Holy Grail, hopping around on one leg and dismissing your dismembered limbs as merely “a flesh wound.”