Chinese virtual reality company Pimax made headlines with a Kickstarter campaign to fund development of an “8K” VR headset, but has continued to struggle through the final stages of finalizing and manufacturing the device. The latest issue: Out of nowhere, the company has announced an alternative called the “5K Plus,” which despite a lower resolution actually offers decidedly superior details and performance than the 8K model.

As implausible as that might seem, the 8K versus 5K issue casts a spotlight on little-appreciated differences between the pixels in modern displays — their microscopic arrangement and shapes. Rather than using same-sized rectangular red, green, and blue pixels, some displays include a mix of pixels and sub-pixels in different sizes and patterns. As a result, one display will deliver an “8K” resolution by including a large number of sub-pixels for color and contrast reasons, while another will actually deliver greater detail despite using fewer pixels.

That’s what appears to be happening with Pimax’s latest announcement. As RoadtoVR notes, the 5G Plus model promises 2,560 by 1,440 pixels per eye, versus a claimed “3,840 by 2,160 per eye” resolution of the 8K model. However, the latter screens appear to use PenTile displays that overstate their resolution by about a third. 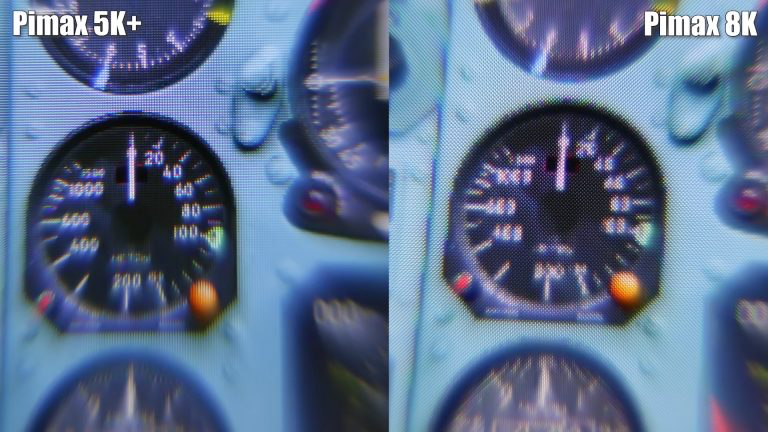 As a result, several users who tried both displays have said that the 5G Plus actually offers sharper details than the 8K model — an issue Pimax, to its partial credit, is attempting to reasonably address with its backers. The company is allowing backers to switch orders for the 8K headset to the less expensive 5K Plus model, and receive a $100 coupon towards Pimax accessories. While that superficially seems like a classic example of a bait-and-switch, if it actually yields better results for users, it could be a win for all involved.

Except, of course, for the whole marketing fiasco. Drawing customers in with the promise of the first “8K” VR headset and eventually shipping them something that’s not 8K isn’t a good look for any company. What’s worse, the company is said to still be working on another model, the “8K X,” which has been announced but not shown publicly. The 8K model won’t actually accept native-resolution 8K video input, but the 8K X model apparently will, along with supporting 90Hz frame rates.

What’s the point of an 8K headset if you’re not actually displaying 8K content on it? That’s a great question, but backers of the crowdfunded project have known for some time that actually using the 8K hardware to its full potential would be an issue. In one of several cold-water updates on its manufacturing plans, Pimax earlier said that it would downgrade the 8K headset’s frame rate from 85Hz to 80Hz so current computers could push enough pixels to fill the displays, which collectively promise a 200-degree field of view. Actually using the 8K X — and achieving true 8K at VR-safe speeds — could require a GPU beyond the ones found in current PCs.

It’s no shock that some backers are upset over the latest developments, but at least the saga seems set to finally reach some conclusion by year’s end. Pimax is supposed to be shipping the headsets within a month, at which point the debate will commence over whether the added performance of the 5K or 8K headsets was enough to justify all of the drama compared to HTC, Oculus, and Sony solutions already in stores.