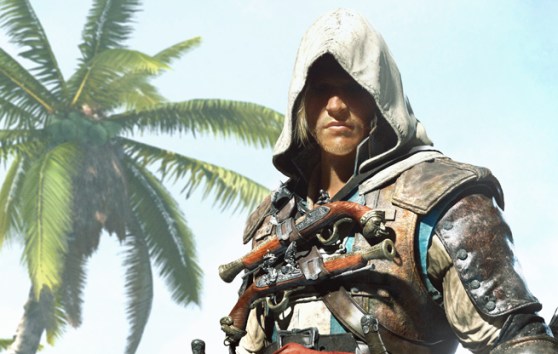 Edward Kenway stands on a sandbar sticking out of the wide ocean and watches two ships trade broadsides in the distance. The skirmish has nothing to do with him. British and Spanish fleets tangle regularly in these waters, each trying to win the West Indies for their crown. But Kenway’s a pirate living in the golden age of pirating, and he only fights for treasure.

That’s just one little slice of life I saw during a live hands-off demo of Assassin’s Creed IV: Black Flag (releasing October 29 on PC and all current and next-gen consoles). The sandbar’s another. Kenway spotted it and the hulled ship wrecked upon it as he sailed by in his brigantine, the Jackdaw, so he decided to investigate.

Because while he’s affiliated with the Assassin’s Order and uses its methods, Kenway’s a privateer through and through. 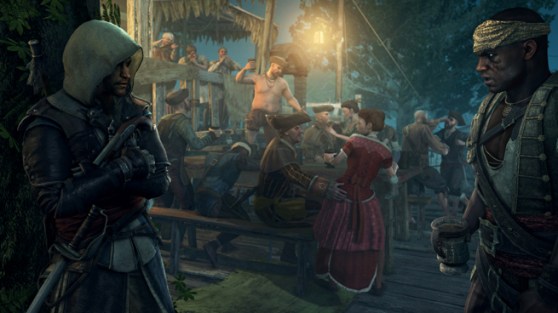 Once he shoos away a mass of crabs, the body of a marooned sailor gives up a hand-drawn treasure map. It shows crudely drawn palm trees, an ancient temple ruin, and a bright red X. That sailor was a traditionalist. Kenway’s more than happy to be such a grand artist’s inheritor.

A school of dolphins leaps out of the water nearby as Kenway swims back to the Jackdaw and sets sail for Mysteriosa Island and that buried treasure. On the way, a whale breaches to starboard — an invitation to the controversial harpooning missions — and the Jackdaw hits bad weather. Rogue winds that push you off course are a thing of the past, but I spy a distant water spout that destroys a passing frigate. Kenway steers well clear of it. The spouts can rip up both your ship and your crew, and you need your men intact when it comes time to attack and board other ships.

A rowboat on Mysteriosa’s beach tips Kenway off that we’re not the first ones here. Rowboats also serve as a fast-travel system around the islands or ship-to-shore.

Sure enough, the island’s crawling with British soldiers. A pirate would do something big, loud, bloody, and rash. Kenway slips into Mysteriosa’s jungle without incident, dashing through the trees and vanishing in the thick foliage. The stealth looks much improved over Assassin’s Creed III, and a few soldiers who wander close to Kenway’s hiding spot get dragged in without anyone noticing, just like the good old days. 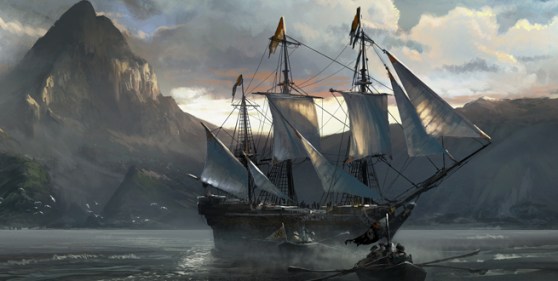 Unlike the good old days, Kenway doesn’t have a brotherhood of assassins to call on to strike unsuspecting enemies. He also doesn’t have arrows for silent, long-distance kills. He does have a blowgun and poison darts that drive victims berserk until his own friends must chop him down. That, along with just a little patience, gets him deep into the interior without anyone raising the alarm. Kenway doesn’t go loud until he comes across a pair of hostages facing imminent execution — that’s when he flies down from his perch for an instant double-execution.

Those hostages join the Jackdaw‘s crew, buffing the ship’s stats. This was a recruitment opportunity.

It takes maybe 15 minutes to find the temple shown on the map, and X does indeed mark the spot. But instead of a buried chest, we recover blueprints for a new type of heavy cannon shot for the Jackdaw’s guns. These missions reward with upgrades, not gold.

If this sounds like the Creed you remember — just on a jungle island — that’s because it is. Later on, in the major city of Havana, I spotted cables connecting the rooftops that looked identical to those Altair ran across during the Crusades and Ezio Auditore used in Renaissance Italy in previous Creed games. Some things never go out of style, I reckon.

But while the basics haven’t changed, purely at the visual level, Black Flag works better than Creed has in years. Picking off unsuspecting enemies from hiding carries a smoothness about it that’s been absent lately. Open combat, described as an enhanced version of ACIII’s, looks even more aggressive than before. I saw far more attacks than counters.

And the integration of the pirate setting feels a lot more thoughtful than what you’d expect from just another iteration of the franchise’s formula. 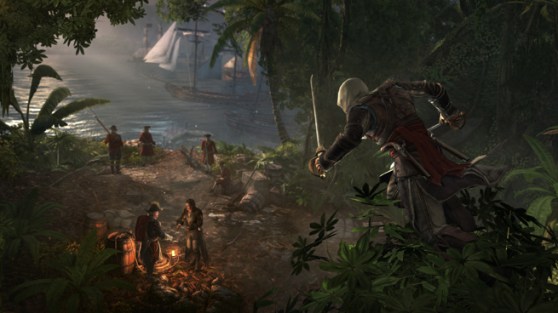 If you wander around a Spanish colony like Havana, everyone speaks Spanish. That’s fine if you speak it, too. If you don’t, the language barrier enhances the alien, exotic nature of that place to an Englishman like Kenway. Naval battles gain more depth now that you aim your cannons. That flexibility is vital to taking out coastal naval forts, Black Flag’s equivalent of British forts or Borgia towers from previous installments. Destroy its six defensive turrets to invade it, and that’s a sight to behold — blowing away the face of this fortress, stone and rock crashing into the sea as its mortars rain down on you.

You kill the fort’s governor to take custody. Kenway accessed the governor’s office by detonating a powder keg with his pistol, then leaping over the desk to plant a blade in his heart. Sorry, matey. Business.

Taking a fort opens up opportunities. For one thing, you can lure enemy ships into the range of its guns to shift the odds in your favor. For another, any known smuggler’s dens in the area now show up on your map, and those caverns are brimming with gold … along with smugglers who want to keep it.

I’ve had problems with Assassin’s Creed lately, but the completeness of this world and watching it in motion has sold me on Black Flag. I won’t know for sure until I get hands-on with it, but right now, I’m excited. Come October, it’s a pirate’s life for me.