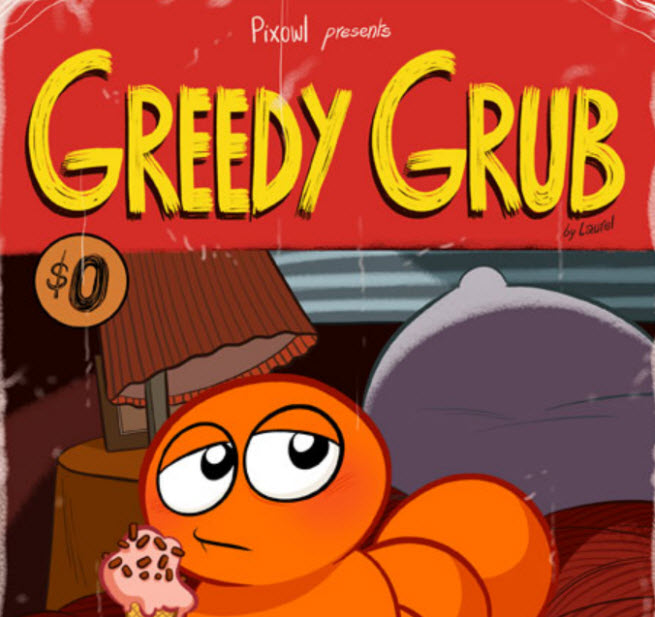 Pixowl is one of the mobile game business’ quiet successes that shows that indies have a big space in the world of mobile apps. The company had a hit in June 2011 with Doodle Grub, a cartoon-style game based on a cute character. Now Pixowl is following up with the launch of Greedy Grub, another game based on the cute, little, orange grub. 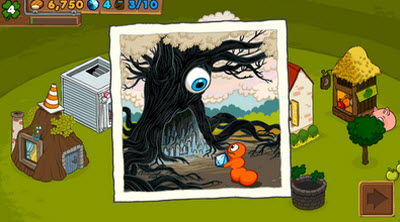 Players downloaded Doodle Grub more than 8 million times across iOS, Android, Windows Phone, Windows 8, and BlackBerry. Only a handful of people made that free-to-play game, but Greedy Grub is the work of a studio with 15 employees in San Francisco, Paris, and Buenos Aires. Three French founders — Adrien Duermael, his wife and comic artist Laurel Duermael, and Sebastian Borget — started the project in April 2011. Arthur Madrid serves as chief executive.

“We’re very focused on character-based games that combine comic art and gameplay,” said Borget, chief operating officer, in an interview with GamesBeat. “We think of it as a rare simulation that is character centric. You directly control the grub with your finger. We want you to feel like you are inside the cartoon.”

Doodle Grub was such a big success that the company managed to raise $1.2 million in funding in September. That amount suggests what a lot of developers have learned over time: Making simple games is very complex and sometimes expensive. 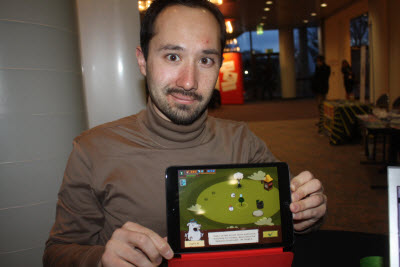 Greedy Grub launched last week in Canada and France and will debut in the U.S. soon. The title is a simulation game. It has short cut scenes, telling the story of how fate separates the little grub from his family when he falls from a tree. He meets an owl who adopts him. The owl, Mayor Apollo, teaches him to be a mayor’s assistant. The player’s job is to help replant a forest after a terrible winter. You have to eat fruits, water trees, and interact with other characters. Pixowl plans to create a total of eight episodes for Greedy Grub.

The company has worked on the title for about a year, and it expects to issue new episodes every two or three months, changing the game based on user feedback.

Last May, Pixowl also launched The Sandbox, a building game that resembles Minecraft. In that 2D game, you create physical elements like water, stone,  soil, mud, sand, electricity, metal, lava, and other things. Then you put them together, and they all interact.

Borget (pictured left) gave a post-mortem talk on The Sandbox at the recent Casual Connect Europe event in Hamburg. The game started with one programmer with a project in Argentina who had built a physics simulator for a title published on Kongregate. Pixowl approached him and asked him to create a casual world simulator for mobile phones and tablets. He agreed, and the company assembled a team around him. Together, they built the game and showed it to Apple. Representatives of the company said that The Sandbox would likely fail because the graphics were so crude.

The team’s morale plummeted after that, but they worked on the weaknesses and trusted their initial instincts. Pixowl added more people to the project, and the larger team made the graphics better. The creative process required constant prototyping and iterating on the design, which the team produced relatively late in the development cycle along with the virtual economy. The team included a lot of software development kits for analytics and advertising, and that was a “pain in the ass,” Borget said. Using Testflight, the team tested the game for more than two months with users. When the developers were satisfied, they launched The Sandbox in May 2012. 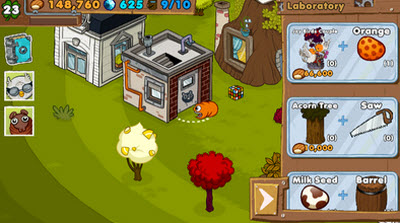 The game won critical accolades, and players downloaded it more than 2.1 million times. Apple nominated The Sandbox as one of the best iOS games of 2012. Players could share their creations and rate those works of art. Players have shared more than 160,000 universes over the course of nine months. Eight updates tripled the amount of content after launch. The community is bustling, with more than 100,000 daily active users.

“It paid off for us not to give up,” Borget said. “The lesson is you should not give up and always try to make the best-quality app.”

Pixowl relied upon cross-promotion deals with other developers. It used Chartboost to arrange those, which are a lot less expensive than advertising an app. Borget said the company also used AppFigures, AppAnnie, Flurry, ApSalar, and HasOffers to monitor everything it needed to manage after the launch. Borget said that it made sense to target marketing only in countries where enough users existed to make a profit. Denmark, for instance, paid off a lot more than Spain for The Sandbox. All of the post-launch activity made a difference, and the game was successful enough for Pixowl to release it on Android.

Borget said that making games as an indie studio is important.

“The first time we showed the game, people said it didn’t make sense,” he said. “But we believed we could take it straight to the audience and find out.”

Full disclosure: Casual Connect Europe’s organizers paid my way to Hamburg, where I moderated a panel.