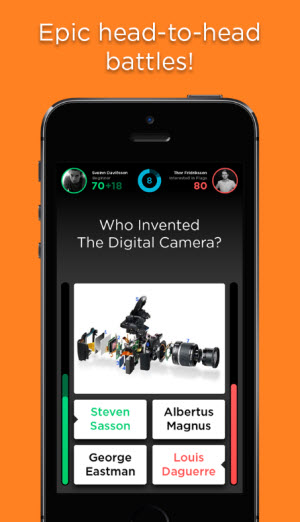 Plain Vanilla Games is launching QuizUp, an iPhone title that it calls the “biggest trivia game in the world.” It makes that claim because it has created more than 100,000 trivia questions in 300 categories.

It is the first title to blend human interaction between friends and strangers with gameplay in a seamless way. In QuizUp, players can play trivia games individually or asynchronously (where one player takes a turn at a time) against another player. Players can issue direct challenges to friends via Facebook connectivity or allow QuizUp to match them up with a similar opponent.

“Gaming is a natural way for people to connect — people like to play games together, challenge each other, and learn more about one another,” said Thor Fridriksson, the founder and CEO of Plain Vanilla Games, which is based in San Francisco and Reykjavik, Iceland. “Through interest-based games like trivia, players are enjoying the game while also connecting with a friend or a fellow fan without even knowing it. Our goal with QuizUp was to bring trivia fans the biggest, most addictive trivia game that ever existed, with categories that span the interest spectrum. QuizUp truly is a game for everyone.”

The company also previously published a child’s entertainment app, the Moogies for the iPad. That game was published by Chillingo in late 2011. The game got good critical ratings, but it wasn’t a commercial success. In early 2012, Plain Vanilla was almost out of money. But the team came up with its idea for QuizUp. They tries to get backers in Iceland but failed. So they moved to San Francisco, where they raised $1 million in a seed round in the summer of 2012. In March, they raised another round.

Plain Vanilla was originally founded in Iceland by Thor Fridriksson shortly after he finished his studies at Oxford University. Its first project was a children’s entertainment app called the Moogies. Thor was inspired by his two young children and the intuitiveness of the iPad for young kids.

“If we had really done some research on the changes of getting funded in Silicon Valley, we probably would never have gone there,” said Fridriksson. “Sometimes being naïve can really be helpful.”