Movie-like games have gotten a bad rap, since they tend to be bad about imitating movies and equally bad with robbing games of their interactivity. But Andy Serkis’ digital effects studio, The Imaginarium Studios, is taking a shot at it with a very different kind of game, Planet of the Apes: Last Frontier. I’ve seen a preview of it, and it looks like it could be a great new form of narrative storytelling in games.

Serkis’ performance capture studio can take acting performances and combine them with digital effects to create lifelike characters, like Gollum in The Lord of the Rings and Caesar in the Planet of the Apes movies. Serkis is using the same technology to create awesome realistic ape and human characters in the game, which is being built by Serkis’ The Imaginati game studio.

Editor’s note: This story has some plot spoilers.

Above: The apes must make a decision that could bring them into conflict with humans.

The studio takes those characters and puts them in animated scenes, and it forces the players to make tough decisions about the conflict between the apes and the humans. The story takes place in between the Dawn of the Planet of the Apes and War for the Planet of the Apes films. Martin Alltimes, CEO of The Imaginati Studios, showed me a scene that typifies the kinds of decisions you have to make, which are a lot like Telltale’s The Walking Dead or Until Dawn.

Alltimes’ team of 30 developers created all-new characters, since every one of the characters can live or die in the game. As a result, the game has 11 different possible endings. When you make a decision, you only get two choices. That makes the game more accessible than titles like Heavy Rain, where you may have more choices. But as many as four players can join, with each player getting a vote in the decisions. The developer accomplishes that through Sony’s PlayLink technology, which lets you use smartphones to vote in a PlayStation 4 game.

“Humanity has been wiped out. These humans are living on the edge,” Alltimes said. “They’ve had their friends and loved ones killed. Anything that threatens their survival, they’re going to react against it, and sometimes not completely rationally. We wanted to take that idea. In our story, you play as both a human leader and as someone who’s part of the ape tribe.”

In this story, the tribe of smart apes has migrated into the Rocky Mountains, where they believe they have a sanctuary. But as winter comes, the apes run out of food.The leader of the pack sends his three sons out to forage.

“The eldest son, Tala, is aggressive and impulsive. It’s implied, but not made explicit, that there’s no mother there, that she’s been killed by the humans in the conflict,” Alltimes said. “He has no time for humans. You play the middle son. Your story arc is all about how you deal with the conflict between the two different philosophies that exist in your family, and your divided loyalty between your brother and your father. Your brother is out for war and revenge against humans. Your father just wants to keep the tribe safe and avoid any conflict.”

Above: Planet of the Apes: Last Frontier works with Sony’s PlayLink tech.

The third son, Juno, is more sensitive and emotional. He has a congenital deformity, and he is afraid to anger his father. When the apes come upon a human farm, Tala wants to attack it. June is afraid of the consequences of fighting with humans. Your job is to decide what to do. I chose to attack the farm. The apes go in and are discovered. They have to decide whether to just steal the cattle or attack. They try to kill the humans, but one escapes. The apes get the cattle, but the humans have been warned. This becomes the instant that sparks the conflict between humans and apes, Alltimes said.

During all of the scenes, I thought about how amazing the graphics looked. It was far better animation than a Telltale game, which is more like a moving comic. Then the action changed to the human side.

In that scene, I played a female character who was leading a group of survivors. The humans are in a town at the base of the mountains, and they have fortified about three blocks of it. The woman is the wife of the founder of the town. He died, and the survivors are burying him as the story starts. The humans are in retreat, and the apes are growing stronger. The woman has to be a leader. 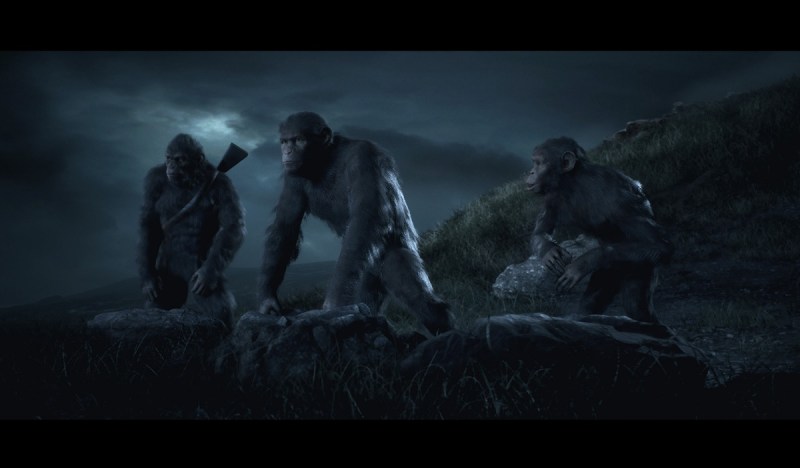 Above: Three ape brothers have to decide whether to attack or not.

Using PlayLink, we wound up with a tie vote. And so one person can use a tiebreaker to win the decision. But once that person has used a tiebreaker, the other player gets a chance to decide the next dilemma.

All told, the game will last two or three hours, so you can play it in a single sitting. The new title debuts this fall as a digital-only title on the PlayStation 4, Xbox One, and PC.