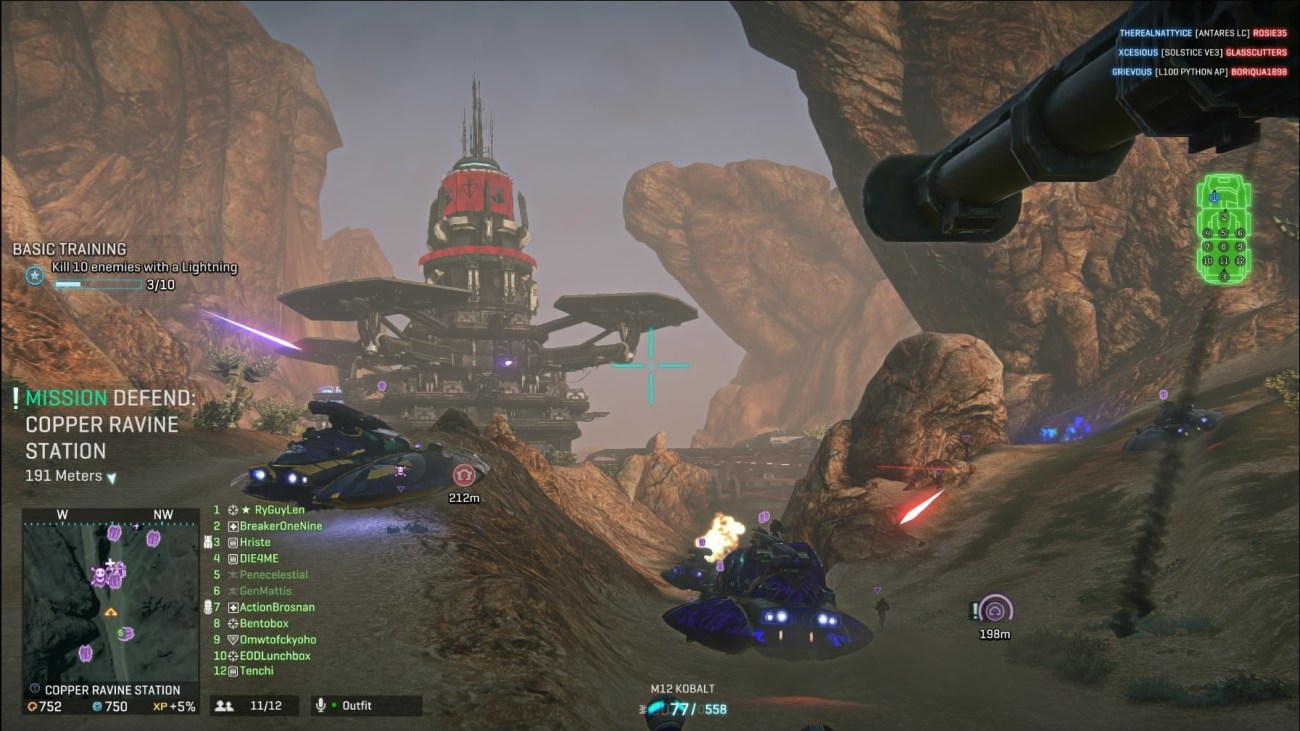 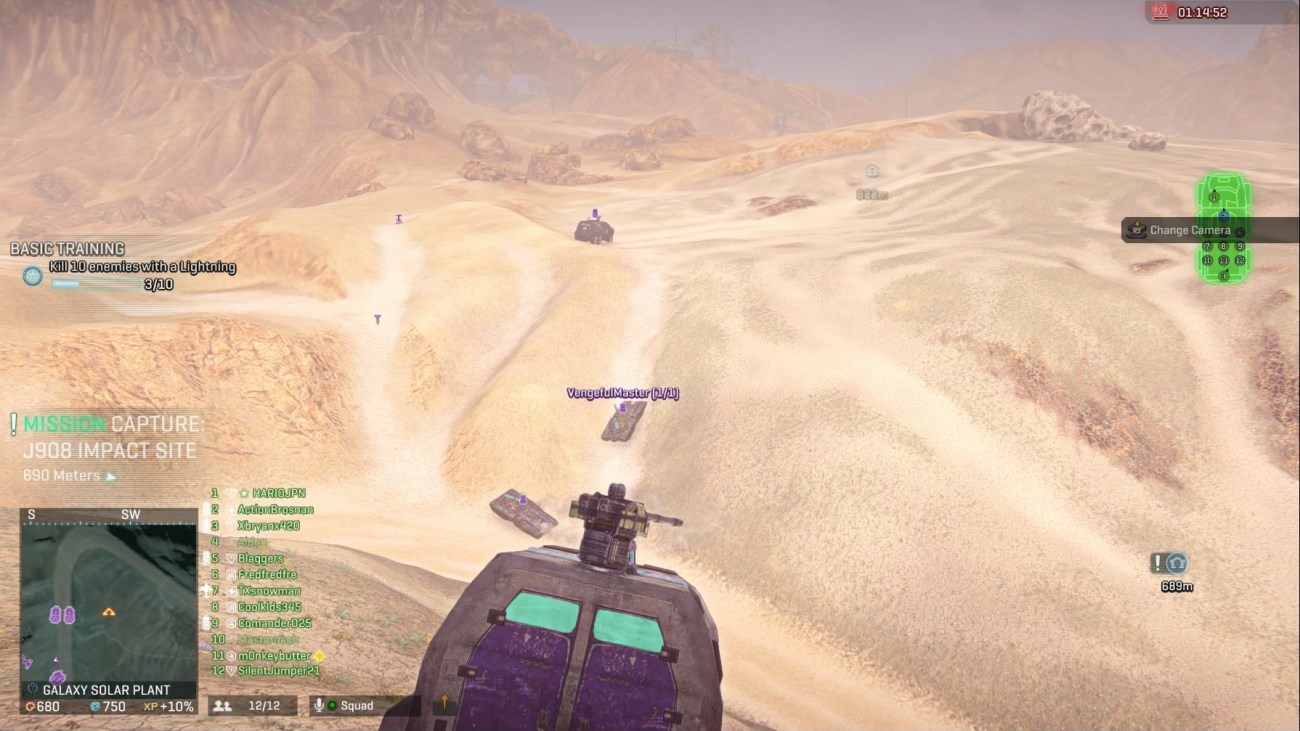 Most of my frustration with PlanetSide 2’s beginning come from its weak tutorial section. After choosing one of the factions, the game drops you into a small continent called Koltyr, a training area for new players. While you can warp to other parts of the world at any time, you can only play in Koltyr up until your character reaches level 15. It doesn’t have as many players as the other four continents, but it will get you up to speed with basics like the strengths of each class and vehicle.

After that, you’re on your own. That’s when you realize Koltyr does a poor job of teaching you the actual flow of battle, which involves destroying a series of enemy defenses before capturing the objectives.

For instance, a tutorial message told me to overload a shield generator, but it didn’t tell me why I needed to do this or where I’d even find one. I spent hours fighting battles on Koltyr and not once did I come across these generators. It wasn’t until I left Koltyr out of boredom and joined the rest of the player population that I eventually found it (it’s only inside certain types of bases). Koltyr inexplicably leaves out a lot of crucial information. I turned to YouTube videos to fill in those gaps, and it was only then that I began to understand and enjoy the game a lot more.

It doesn’t run that well

Given how merciless the gameplay is, you’d think that everything would feel snappy and responsive. While the shooting, flying, and driving mechanics are fine, other things could use some work. Summoning vehicles at a computer terminal is unpredictable: Sometimes, I’m driving right away, other times I’m stuck on the selection screen while PlanetSide 2 catches up with my button presses. Bringing up the map (which I use a lot to see how many enemies and allies are in my area or to respawn somewhere else) is always a pain because it takes way too long to load. The long load times when warping to a different part of the same continent are more understandable, but that time just adds up and kills any momentum you might’ve had.

You might hit a few bugs, too, like when I fell through the world while trying to spawn on a vehicle. PlanetSide 2 also crashed to the PS4’s main menu several times.

When trigger-happy teammates kill you

Fratricide is an unavoidable part of life in PlanetSide 2. It’s one of the hardest things to get used to — if you’re a Vanu soldier who died at the end of ActionBrosnan’s barrel, I’m sorry! But I’ve become better at recognizing friend and foe, which makes it frustrating when my team kills me, especially if I’m doing pretty good during that battle. I’m often shot by teammates when I’m just running over to heal them with my medic. One incident that still hurts was when I was kicking butt as a MAX and died only because a Vanu tank ran me over.

This is why the spotting feature — the R1 button on the PS4 controller — is so helpful (and another thing the tutorial fails to mention). Spotting tells you if a player is friendly or not. Please use it! 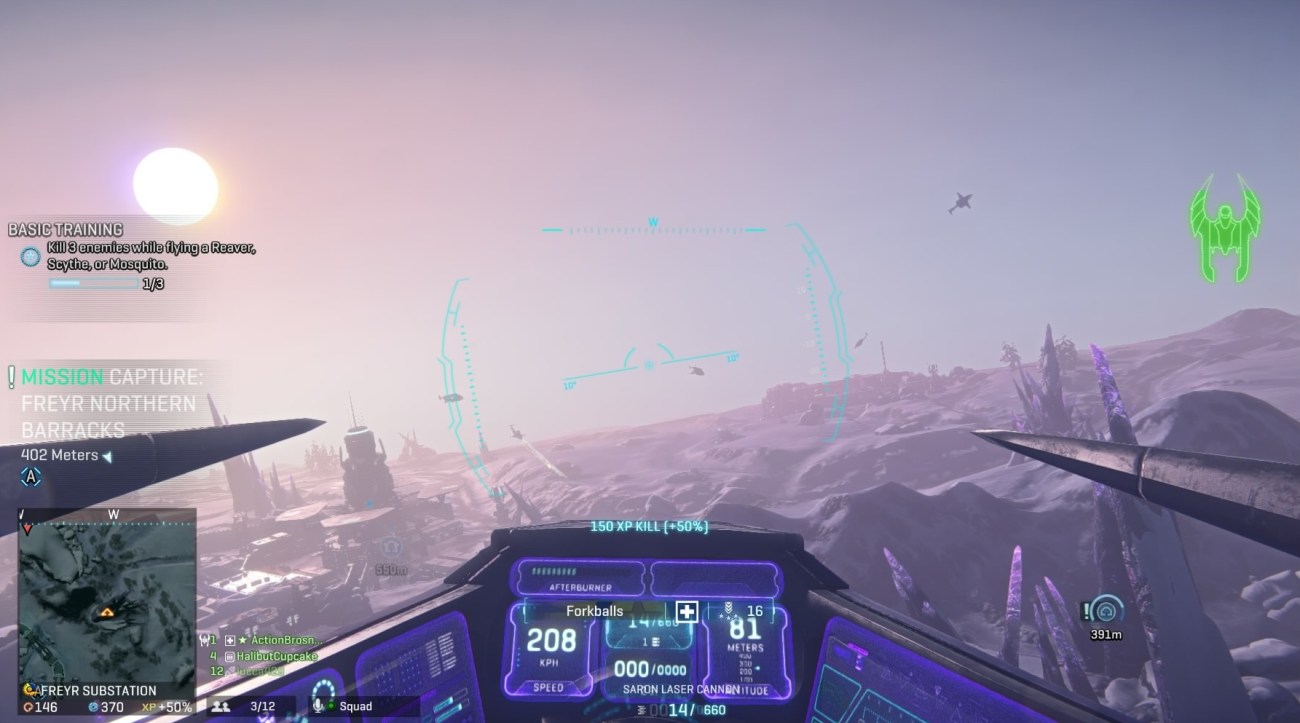 Above: Flying takes a lot of skill. I died about 30 seconds after I took this screenshot.

For better or worse, Daybreak didn’t design PlanetSide 2 for instant gratification. I’ve had hours of playtime where enemy forces were so overwhelming that I barely got anything done. But I’ve also had hours that were full of tense battles filled with explosions, multicolored lasers, and missiles. When you play at night, it looks like a chaotic fireworks show.

But getting to that point is tough. The learning curve is steep as it is without the sluggish performance and barebones tutorial that drag you down. If I wasn’t reviewing PlanetSide 2, I’m not sure if I would’ve continued past Koltyr and saw just how good the game can be. Your enjoyment will depend on how much time you’re willing to spend with it.

PlanetSide 2 came out on PlayStation 4 on June 23. It’s also available on PC.