Lost Island launches today on iOS and Android. It’s rare for Plarium to target the casual gamer. The title features an in-depth item collection and inventory system that influences each new puzzle over 750 levels and hundreds of quests. The company also says that it has the largest puzzle grid in the genre for added strategy (12-by-9 instead of 9-by-9).

Plarium has more than 250 million players worldwide, and so it has ways to spread its new game to a lot of people. Lost Island: Blast Adventure is now available for users around the globe in Chinese (Simplified & Traditional), English, French, German, Italian, Japanese, Korean, Russian, Spanish, Turkish and Portuguese.

Players begin the journey by arriving on their newly purchased island with the hope of creating a comfortable home. But you find lots of strange rumors from the locals about the remnants of an ancient civilization from hundreds of years ago. 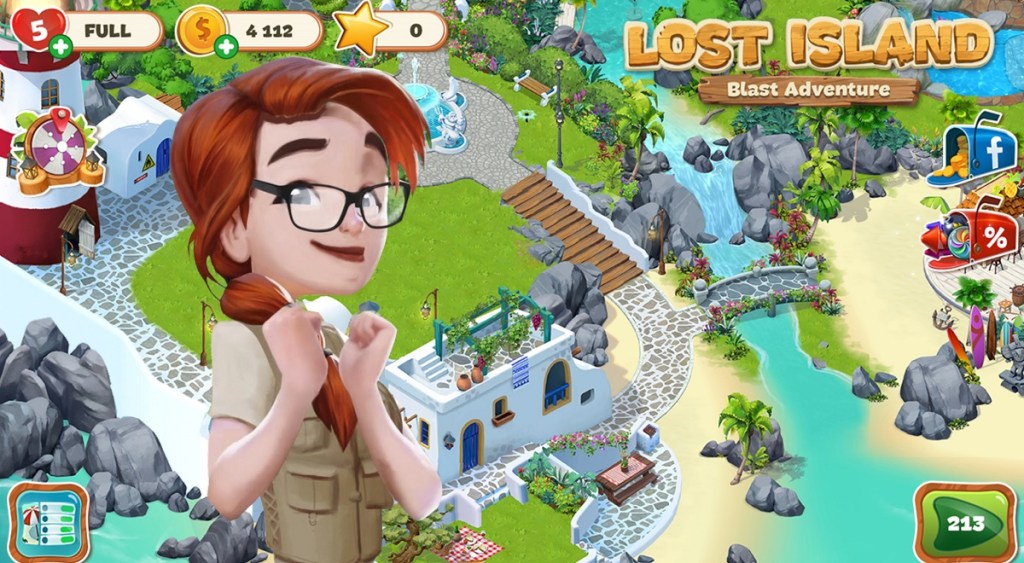 Above: Lost Island: Blast Adventure has a long narrative to engage blast players.

You are paired with the archaeologist, Ellie, to help to solve the mysteries plaguing the island and build it anew.

“Lost Island is the first Blast game to provide a complete narrative experience for the player, filled with fully-voiced characters that help bring the experience to life,” said Dima Karger, producer and director of art and game design at Plarium, in a canned statement. “We wanted to set a new bar for the genre by providing faster and more involved blast gameplay than exists today, and tie it to an engaging plot line that creates one cohesive game, rather than a series of levels.”

Lost Island incorporates a new mechanic into the Blast genre with the Rainbow pearl, a chargeable meter that will destroy an entire color from the grid. Players can recharge the meter by using other boosters provided throughout gameplay.

“In many ways, Lost Island is the result of what we learned from many years of development in strategy/RPGs for mobile to bring a level of immersion that’s missing in many casual games,” says Gabi Shalel, chief marketing officer of Plarium, in a statement. “It provides the quick fun, addictive gameplay, and vibrant design the genre is known for, but is built within a fully-developed story experience and item collection that affects the way a player experiences the game.”

I asked Dima Karger, producer and director of art and game design at Plarium, why the company made this games. In an email, he said, “The driving force behind the development of Lost Island was to examine what it would be like to bring narrative and depth that has been at the heart of all Plarium’s multiplayer strategy/RPG titles into a casual game environment that everyone can enjoy in a single player experience. It was important for us to show that a Blast puzzle game can be more than just its core gameplay components, and also have adventure, intrigue, exploration and character development.”

As for moving behond hardcore games, he said, “We still see tremendous success from our mid-core strategy titles and will continue to develop them, but there’s also large growth potential for casual games in terms of gaining new players and advancing the maturity of the genre.”