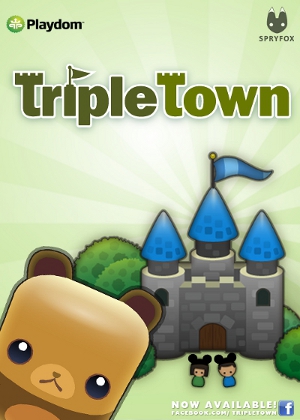 Triple Town is a town-building puzzle game, functioning very similarly to a typical match-three in terms of gameplay, with a few clever twists. The small grid is slowly filled with grass, bushes, houses and churches that players set down, while trying to fend off or capture dangerous bears and ninjas. The game was released last October, and although it has received a fair amount of praise around the web, the numbers have not been entirely satisfactory for the developer.

David Edery, CEO of Spry Fox, outlined the reasons his company chose Playdom as the future publisher of Triple Town, in a recent blog post. Although the game has seen millions of users come and go, there have never been millions of simultaneous players, both for lack of widespread advertising and potential technical limitations. With Playdom’s advanced tools, marketing proficiency, and extensive reach on Facebook, Edery believes that the game will see a much larger and consistent user base after the partnership.

Edery also highlights the importance of keeping Spry Fox dedicated to creating games, rather than running a business. This will not be the first time Spry Fox has chosen to partner with a well known publisher for one of its games. Last year it teamed up with Fruit Ninja developer Halfbrick to bring Steambirds: Survival to iOS and Android.

As for Playdom, developer of the most popular Facebook game of 2011 (Gardens of Time), it wants Spry Fox to maintain complete creative control over the game. Playdom has made it abundantly clear how much it likes the game, and it wants the opportunity to broaden its audience.

Spry Fox plans to expand the title even further, with iOS and Android editions on the way. Only time will tell if Triple Town can reach the lofty heights set by Playdom’s previous titles.