Mobile gamers who make one purchase are six times more likely to make another one, according to analytics and in-app purchase company Soomla. That’s why it’s so important for game companies to entice players to make purchases, even if they are small ones.

Soomla’s Q1 2016 Mobile Gaming Insights report is particularly interesting since only 2 percent of consumers spend in mobile games. Even with that low percentage, in-app purchases are the vast majority of revenues in what has become a $34 billion industry, according to market researcher App Annie.

The report looks at spending habits by cross­-game behavior, virtual economy model and game genre. The new report reveals that users who completed an in­app purchase in one game are six times more likely to pay in another game, compared to any random user who hasn’t purchased.

It also says the likelihood of a user to pay in a second game increases by up to 40 percent based on the amount they spent in the first game. 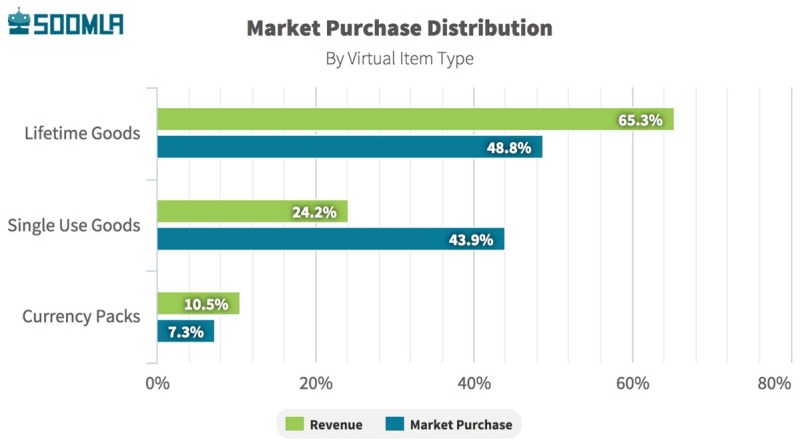 Above: Market purchase details based on Soomla’s mobile game analytics.

The report looked at the behavior of 20 million players from more than 200 countries The findings emphasize the contribution of cross-­game purchase data to the ability to predict paying users.

Yaniv Nizan, Co­founder and CEO of Tel Aviv-based Soomla, said in a statement, “Attracting payers to your game is like finding a needle in a haystack, but when crossing in­app purchase data from thousands of other games, our payer prediction technology reveals which user segments will eventually convert and what they’re likely to buy.”

The report said that quick payers, or those who buy in the first 24 hours after a game is installed, are nine times more likely to pay in another game. Over 40 percent of users who paid $25 or more in one game, will also pay in another game. Holiday season savvy developers achieve an average revenue per paying user (ARPPU) lift in December of 83 percent above the annual average.

And the report said that for each in­-game item users purchase with real currency, an average of 18 additional items are purchased with virtual currency. 65 percent of all app revenue comes from “lifetime” goods (e.g. characters, level packs, remove ads), which cost $2.60 on average. And Soomla found that “single use” goods (e.g. “save me”, ammo, 30­-second boost) account for 71 percent of all in-game purchases.

Solomon Foshko, manager of strategic intelligence at Wargaming, said in a statement, “Soomla’s latest report provides a greater understanding of key trends in the mobile market and how best we can apply that insight for a competitive advantage within our product portfolio.”

Daily active users increase as much as 33 percent over weekends, and this occurs primarily on phones, although sessions on tablets are often longer. Usage patterns differ across game genres as well, with strategy games boasting the highest average session duration of 11 minutes, or­ 2.6 times more than other genres. 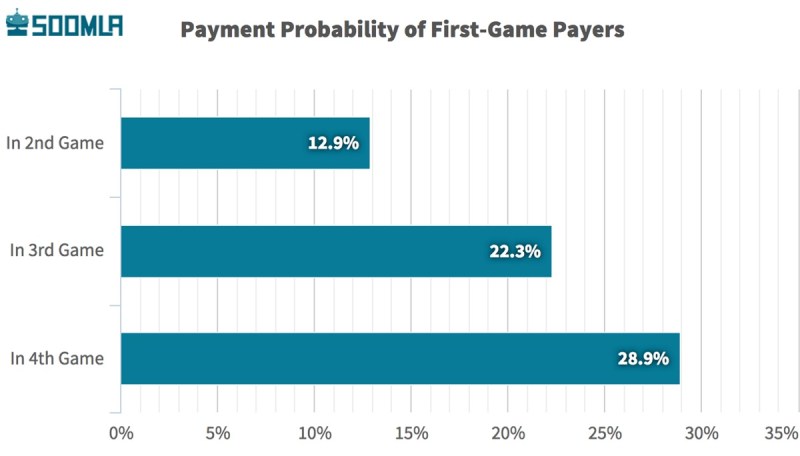 Above: Payment probabilities for payers.