You’re a god of Norrath.

With a click, you can create parts of the world for the next installment of the EverQuest massively multiplayer role-playing game.

GamesBeat interviewed Dave Georgeson, the director of development for the 15-year-old franchise at Sony Online Entertainment, about the new game EverQuest Next, which is due to head into beta testing on PC this year. He said that players’ items and creations will show up in the final version of EQN. 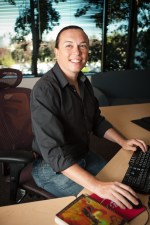 SOE created an entirely new game to make that possible: Landmark, now in closed beta. He expects the gameplay experience for that to be complete this year.

“We absolutely believe that players and devs working together is way better than just devs alone,” he said.

“The foundations for what we needed in EverQuest Next are all in Landmark,” he said. “There are a lot of things to be built on top of these bones.” 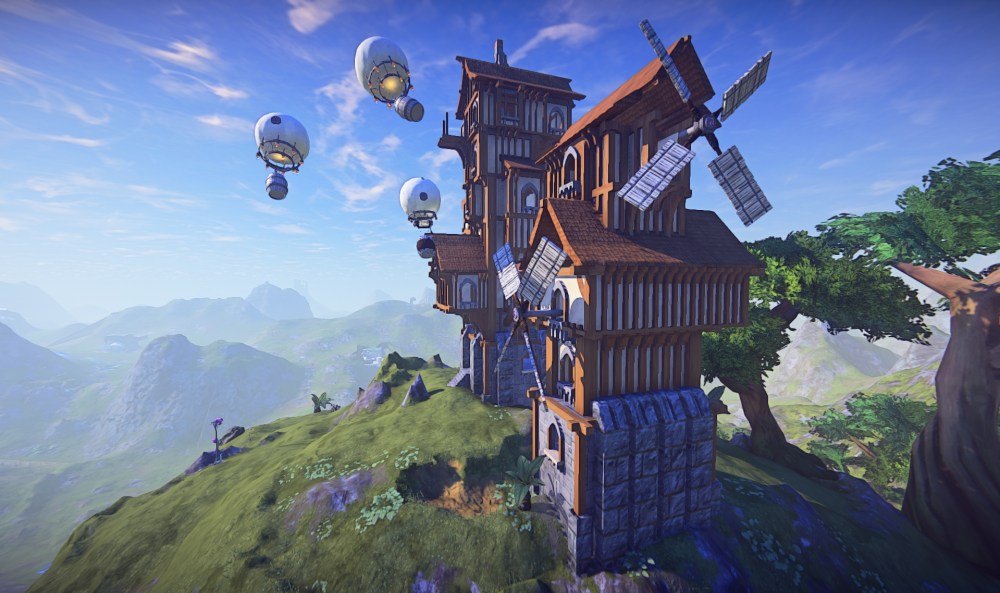 Above: Players can create buildings like this one on their land in Landmark.

GamesBeat: Why did you create Landmark?

Dave Georgeson: We started out imagining an EverQuest Next [EQN] that would be completely different from any MMO created to-date. One of the tentpoles we decided upon was that the entire world of EQN could be destroyed or changed at any time during gameplay. To do that, we made the world entirely out of voxels. [These are geometric shapes that combine to form an object.]

However, making the world entirely out of voxels meant that all our tools had to be special and unique. When we were designing how those tools could be used, we considered how cool it would be to prerelease those tools to the players a month or two before EQN was launched so that players could build their own homes or guild halls for day one of launch.

Once we decided to do that, it set the snowball rolling. We talked to a few players and we saw the lights come on in their eyes when they realized they might have a chance to use their own creativity to influence EverQuest Next. Then we started theorizing about how we could go even further and eventually, we decided to spin up a set of persistent worlds that the players could use as their own sandbox, making whatever they desired, not just EverQuest Next.

There were more steps than that, of course, but ultimately, voila!, Landmark. 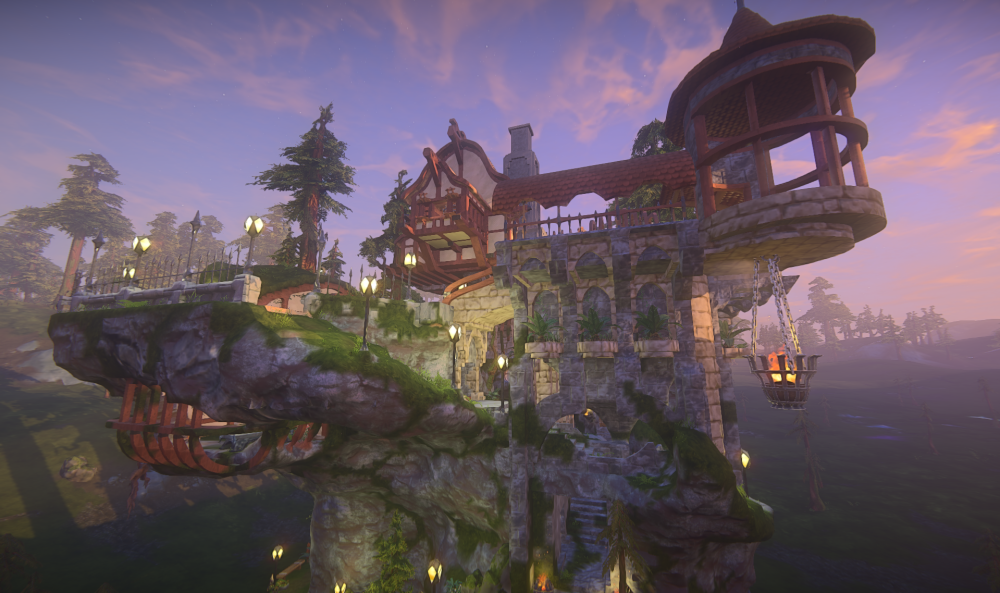 Above: A wildly intricate building in Landmark.

GamesBeat: What was the original goal behind Landmark’s creation?

Georgeson: Landmark was originally created so that players could help us craft the new Norrath, but it quickly became obvious that letting the players build anything they can imagine could result in really stupendous stuff. That’s why we adopted the motto of, “Everything we can do, they can do.”

With the introduction of the gamesmastering tools next year, players are going to be able to build almost anything they can imagine … and then invite their friends and fellow players to participate in it within a persistent, living world.

In other words, they’ll soon be creating their own virtual reality.

Our goal was to make everything intuitive enough that anyone that wanted to pursue it could do so and that it would be fun. So far, we’re happy with the way things are turning out, and so are the players.

GamesBeat: What have players created that you are considering?

Georgeson: We have run three “Museum” competitions so far within Landmark. They were the Dark Elf, Kerran and Ogre museums.

During these competitions, we provide our players with all the concept art and style guides for those cultures. Then, we turn the players loose with ideas of the sorts of things we’d like to see within EQN, and they compete against each other for the privilege of having their creations included within the game when it launches.

During that process, the players make suggestions and we actually change our style guides to incorporate the ideas the players created.

GamesBeat: What happens to the player creations you select?

Georgeson: We include the best of what’s offered into EQN and Landmark, but we don’t just slap it in. We tweak it, combine their efforts together in unusual ways, populate it, and add story around it. We also work hard to make sure that the creators get credit for their efforts.

A great example of this is the cavern ruins that we just added to Landmark. Players and devs created ruins from many genres — derelict spacecraft, abandoned mage towers, destroyed railroad bridges, etc. — and as players explore through the deep caverns of Landmark, they will find these ruins populated with monsters. 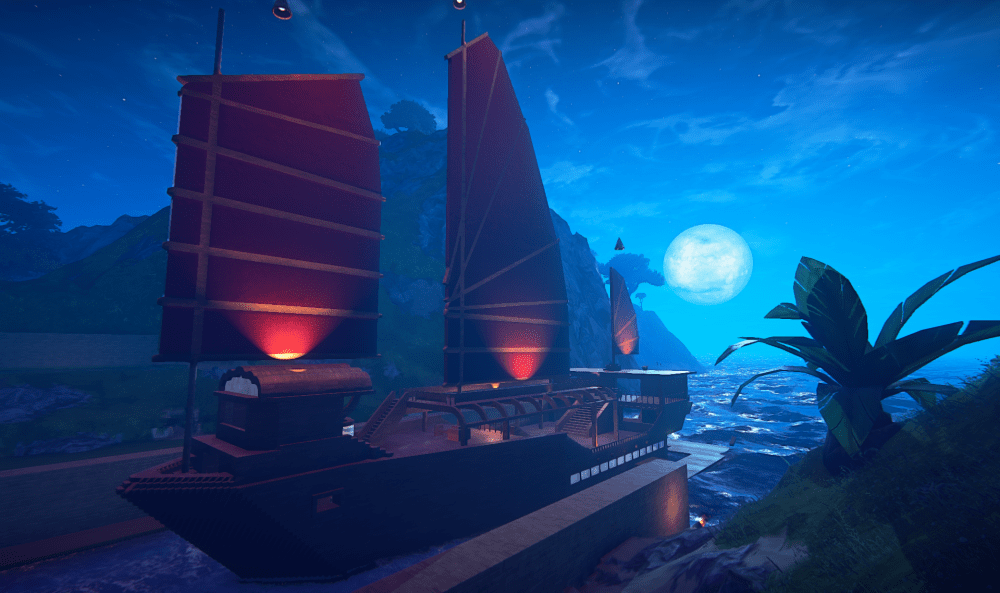 Above: Not all creations in EverQuest Landmark are on dry land.

GamesBeat: Will things people create in Landmark continue to be incorporated into future patches of EverQuest Next after its release?

Georgeson: Heck, yes! Landmark and EverQuest Next are designed to be heavily influenced and shaped by their players. We’ll guide a lot of the story and scenarios within EverQuest Next, because it’s much more story-oriented than Landmark. But Landmark and EQN both have ways for players to craft and create content. Why? Because it’s freaking awesome, that’s why. Who doesn’t want to affect their chosen online world in a permanent fashion? 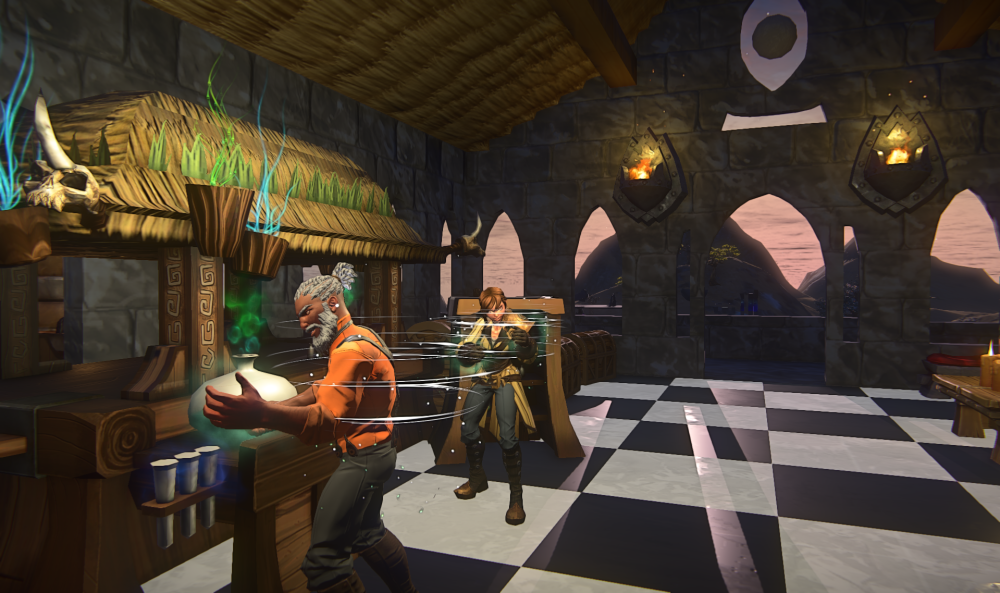 GamesBeat: Is Landmark releasing as a separate product? Is there a schedule for that?

Georgeson: Yes, Landmark is, and always will be, a separate product from EverQuest Next. Both products are built on the same engine backbone, but the feeling of each of them is very different from the other. We’re in closed beta right now, and open beta is sometime in the reasonably near future. However, we’re not announcing that date because we reserve the right to change it based on what we’re hearing from players.

We have already changed Landmark in major and significant ways because of that player feedback. We strongly feel that the game is far, far better because of that collaboration and we don’t want to jeopardize it in the future.

We’ve got quite a bit of work to do still before we go Open Beta, but there has never been a game like Landmark. It’s not like anything else you’ve ever played. Jump on in, the water’s fine.