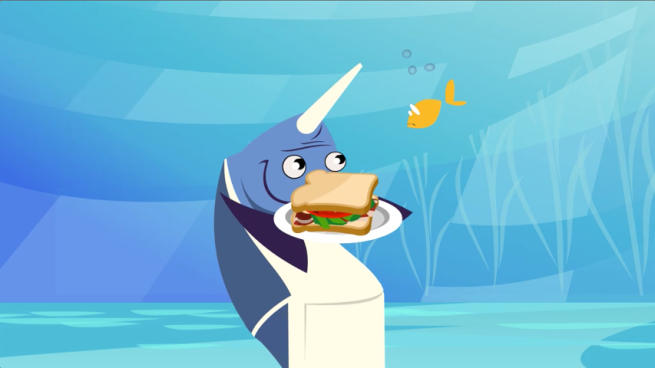 A wise lobster once told me: “Under the sea. Darling, it’s better down where it’s wetter. Take it from me.” Mobile developer PlayFirst put its faith in that little singing crustacean for its first new game in some time.

The studio, famous for its Dash franchise of mobile games, recently launched Deep Sea Deli on iOS devices. It stars a new franchise character, called Narly the Narwhal, that PlayFirst hopes will capture players’ hearts in a slate of upcoming mobile releases.

As part of its mobile push, PlayFirst recently closed a $2 million funding round led by Rustic Canyon Ventures, Mayfield Fund, Doll Capital Management, and Trinity Ventures. These partners have previously invested in PlayFirst and are continuing their support through this most recent round. The company will use the cash to further develop its online infrastructure and new games.

In Deep Sea Deli, Narly must put together sandwiches for sea creatures using deli meats that have fallen off of a shipping barge. It’s a basic matching puzzler, but you need to combine the ingredients to build a delicious hoagie rather than three identical gems, jewels, or candies.

“Deep Sea Deli is a limitless match-puzzle game,” PlayFirst vice president of marketing Becky Ann Hughes told GamesBeat. “It’s more about strategic depth, limitless gameplay, and getting a high score. Something that sets the game apart is the character integration.

Deep Sea Deli came out of an internal game jam where PlayFirst’s developers broke off into teams to create original concepts over the course of one day. The various informal groups came up with several ideas that PlayFirst intends to expand on, but Deli was the most fleshed out and ready for production.

While this idea came out of the game jam, the Narly character grew out of the experience PlayFirst earned working on its popular Diner Dash games.

“We learned how important it is to tell an enduring story,” PlayFirst chief executive officer Marco DeMiroz told GamesBeat. “If you look at the Dash franchise, it’s really all about how Flo, the hero, was a former investment banker going through a tough time. She started busing tables in Diner Dash, then working with her grandma in Cooking Dash, and then helping her friend, Quinn, in Wedding Dash — so she’s a true entrepreneur.”

DeMiroz thinks players connect with Flo because they followed her arc across multiple games.

“That’s what we learned from Dash,” he said. “That we need to tell a really good franchise story.”

Utilizing that template, PlayFirst wants to take Narly from Deep Sea Deli to a number of additional games all starring him and his underwater friends. In fact, building an enduring and interconnected franchise is so important to DeMiroz that he pointed out one-off games as something he wants his company to completely avoid.

“I think one-off games are really dangerous unless you are super-lucky and that one-off game happens to become a massive hit,” said DeMiroz. “On our product roadmap, we’re not looking just at game one. We’re looking for game two and three along the story.”

That strategy worked for the Dash series. PlayFirst grew from 4 million monthly active users in 2011 to 10 million MAUs in 2012. DeMiroz says the target is to have 20 million MAUs by the end of 2013.

To help with that, the studio continues to invest in its proprietary network that manages its online data and helps cross promote its titles between each release.

PlayFirst is also expanding its support on Android by switching completely to the cross-platform Cocos2D-X development environment. This will enable the company to simultaneously release its games on iOS and Google’s operating system.

Finally, DeMiroz teased a new title that ties into the upcoming Sony Motion Pictures film Mortal Instruments. That Twilight-like film, due out in August, has a slightly different audience than PlayFirst is accustomed to, so the developer plans to try a new genre for its adaptation.

The company will release further details about that title in the coming weeks.