It’s time to bid our final farewell to the PlayStation 2.

The aging console saw its last retail release in November, just a week before its grandkid, the PlayStation 4, hit North America.

At least, we’re pretty sure it’s the final retail release. You see, no one wants to confirm that Pro Evolution Soccer 2014, published by Konami, is definitely the last PlayStation 2 game.

We reached out to Sony, but it just wouldn’t give us a straight answer. And we waited very patiently, hoping it would.

We’ve checked in with GameStop, but it didn’t want to divulge the details of its release schedule. We even asked the Entertainment Software Ratings Board, but it wouldn’t say if any PS2 games are going through the ratings process.

But as far as we can determine, absolutely nothing is production, and Sony stopped making PlayStation 2 consoles a year ago. So, this has to be the last official PlayStation 2 game … right?

Hey, I was supposed to play this game! 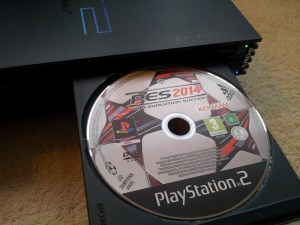 I sat down to play Pro Evolution Soccer 2014 a few weeks ago, having dug out my PlayStation 2 and my old CRT television and set it up in the living room. I’d even managed to find my last working DualShock 2 controller, having rummaged through a ton a boxes (unearthing a few more gaming treasures in the process).

The menus looked promising, once the game let me in – I had to delete a bunch of old save files first to make some space on my 8MB memory card (yep, 8MB).

Then something unexpected happened. “What’s that you’re playing?” my son called from next door.

I told him it was a game I was writing about. His interest piqued, he came and watched me play an exhibition match. The next thing I know, he’s persuaded me to hand over the controller and avidly diving through the menu system, seeing what excitement PES 2014 could offer up.

Now, our house has a lot of gaming options: consoles, handhelds, tablets, PCs. We’re pretty spoiled for choice. But for one week, my son — more usually found building devilish traps in Minecraft or trading players on FIFA 14 (on the PlayStation 4) – wanted to play nothing else but PES 2014 on the PlayStation 2

He played friendlies against his younger sister, took on the Champions League, and created his own player in career mode – “Mooshy,” a 6-foot-8 giant from Holland – endlessly tweaking his hair styles, glasses, and beard options.

At one point I came in to find him, controller in hand, watching Southampton (known as “Soton” in the game due to licensing restrictions) play Arsenal (or “North London”).

“Why aren’t you playing?” I asked.

“Oh, I’ve not been picked for this game,” he said.

“What, your player’s not even on the bench?”

“Right. But … you’re not skipping the game?”

Proof, if needed, that the PlayStation 2 can still deliver a gaming experience powerful enough to capture a 10-year-old’s attention, even with the lure of shinier, more powerful consoles just a few feet away. 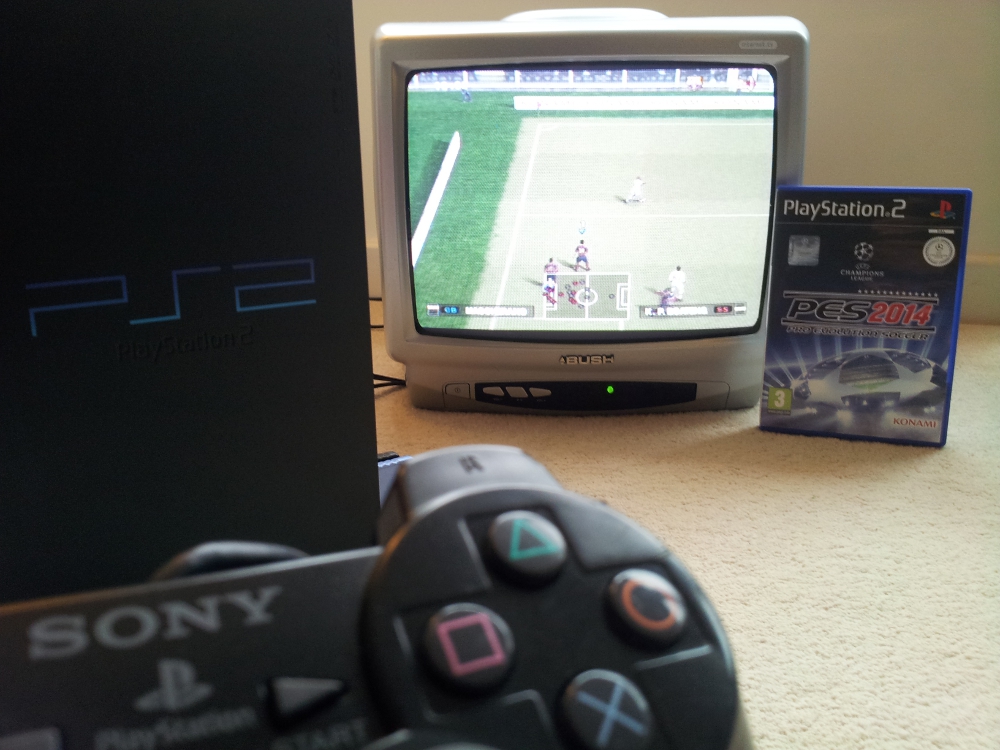 Above: It felt good to take the PlayStation 2 for a spin.

My son isn’t the only one who’s been playing PES 2014 on the PlayStation 2, though. While the game didn’t see a North American release, Konami has published it in Europe (including the U.K., where we’re based) and Latin America.

While its release hasn’t made retail headlines in the U.K. — it’s currently ranked 3,622 in the PC & Video Games category on Amazon — you can find a healthy amount of chatter about it on Twitter and Facebook, particularly from Latin America.

Luis Baute is a computer scientist from Carobobo, Venezuela. He’s been playing PES 2014 on his PS2, and he told me about the changes from earlier versions. Konami has improved the player’s faces, apparently, along with the music, menus, and main interface. The player rosters and stats are current, but the control scheme is as before. 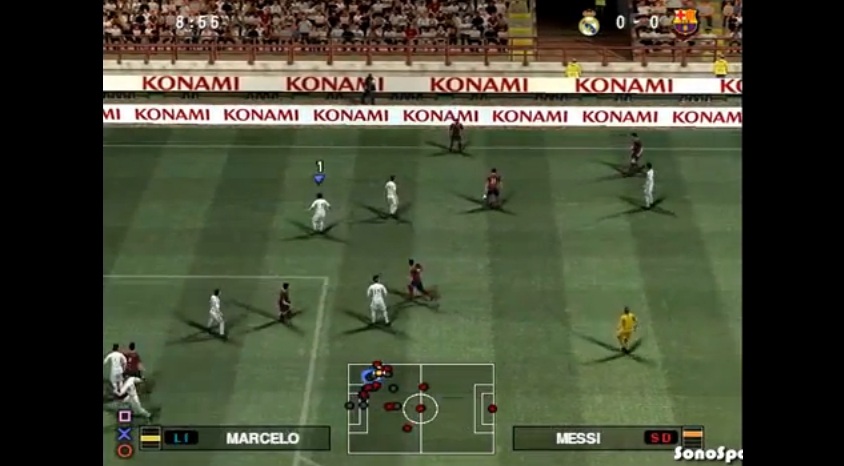 Above: A gameplay shot from the PlayStation 2.

He also said that “there is a lot of demand for pirated PS2 games, since the originals are very costly.”

Baute says that PlayStation 3 is only really accessible to the middle classes and high society in Venezuela. As for PlayStation 4, he tells me it hasn’t reached there yet, and it will only be affordable to the most affluent members of society when it arrives.

Many Venezuelan gamers may ditch console gaming completely, though. Baute says that PC games are becoming more in demand there because it’s cheaper to buy a decent video card and a controller than a PlayStation 3 or Xbox 360.

Daniel Spadaro, a 23-year-old law student from Italy, has also been playing PES 2014 on his PlayStation 2. While he told me it was nearly identical to earlier versions, he still had praise for Konami’s continued support of the PS2 so late into its lifecycle.

For Spadaro, PES 2014 on the PlayStation 2 is superior to rival soccer game FIFA 14. He’s actually hoping to buy a PlayStation 3 soon, and he says he’s going to stick with PES over FIFA when he makes the change. 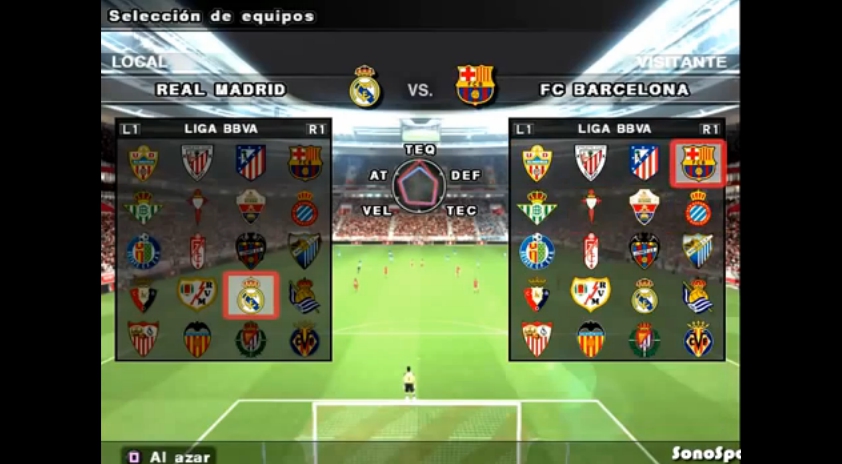 Above: The team selection screen.

The lasting impact of PlayStation 2

Konami wouldn’t talk about expected shipping numbers or sales figures for PES 2014. The publisher did share its thoughts on the PlayStation 2’s importance, however, in light of this pretty momentous release.

“The PlayStation 2 has been a key component to Konami’s success over the years,” said a statement issued to GamesBeat. “During the PS2’s many years of success, Konami released several groundbreaking titles for the platform, including Castlevania: Curse of Darkness, Metal Gear Solid 2: Sons of Liberty, Metal Gear Solid 3: Snake Eater, and several editions of the Pro Evolution Soccer series. 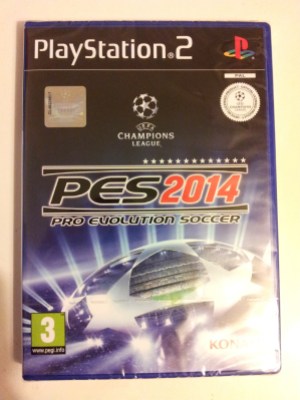 Above: The last PS2 game in its sealed glory.

“The then-revolutionary graphics and ability to play DVDs gave the PS2 the market penetration to bring an amazing collection of PlayStation games into the homes of millions of gamers worldwide at a pivotal moment in the gaming industry.”

Darron Nielsen, a senior merchant at GameStop, also told GamesBeat how important the PlayStation 2 has been to the retailer over the years.

“The PlayStation 2 has been a massive success for GameStop and the video game industry as a whole,” said Merchant. “Not only is it the best-selling gaming console of all time, spanning a lifecycle of more than 10 years, it also gave birth to some of the most successful game franchises such as the God of War series and the Ratchet and Clank series. With a wide variety of games and truly innovative hardware for the time, the PS2 has helped shape the industry that we love today.”

Kind words for a console that was the very definition of a game-changer. Thirteen years on, and a new release can still captivate gamers across the world.

It’s a shame that it’s the last.