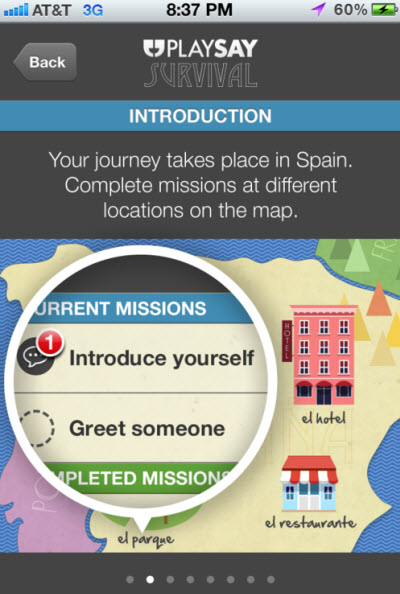 The goal of the PlaySay Survival app is to take learning out of the classroom and make learning a language more fun.

You can learn pronunciation by using the app to complete a series of real-world missions in scenarios such as ordering food, introducing yourself, delivering a pick-up line, or asking someone for help.

In the app, which is the culmination of four years of work, you can open a conversation with someone in the network. If you are learning Spanish, the app asks you to say an introduction in that language. If you pronounce the greeting correctly, you can send the message to the other person, who then sends a reply.

San Francisco-based PlaySay uses speech-recognition technology from Nuance to evaluate your pronunciation and provide feedback. The app enables a conversation between people who are interested in language learning. PlaySay keeps score and tracks your points over time for the phrases you have learned. That adds a game-like element which can make learning more fun.

PlaySay contends that rivals such as Rosetta Stone, Voxy, MindSnacks, and LiveMocha haven’t kept learners engaged with language learning the way that Facebook has with its audience.

PlaySay has also secured a $250,000 funding as a follow-on to its earlier funding, and a licensing deal with HarperCollins, the largest foreign-language dictionary publisher in the world.

PlaySay has four employees and was founded in 2008. Ryan Meinzer, founder and chief executive of PlaySay, started the company out of his own need to learn Japanese (and speak to Japanese women).

“Technological advances in speech recognition and cloud technologies have enabled us to create this iPhone app that I am most proud of,” Meinzer said. “It will truly change the way people learn and communicate in foreign languages worldwide.”

The company has raised $820,000 to date from Novak Biddle Venture Partners, Kevin Yu (former director of PayPal Japan, and Sean Glass (founder of Higher One).

PlaySay previously tried to improve language learning by communicating in that language via pictures. That didn’t work out so well, since the learning wasn’t verbal and the options for extending the learning were limited. But the company learned a lot and it turned to the speech recognition technology.