Santa can’t put an app in your stocking. GamesBeat has partnered with attention analytic company iSpot.tv, which measures TV advertising in real-time, to bring you a monthly report on how gaming brands are spending their TV ad dollars and which commercials are generating the most digital response. Below are the top five most-engaging gaming industry brands from November 16 through December 15. 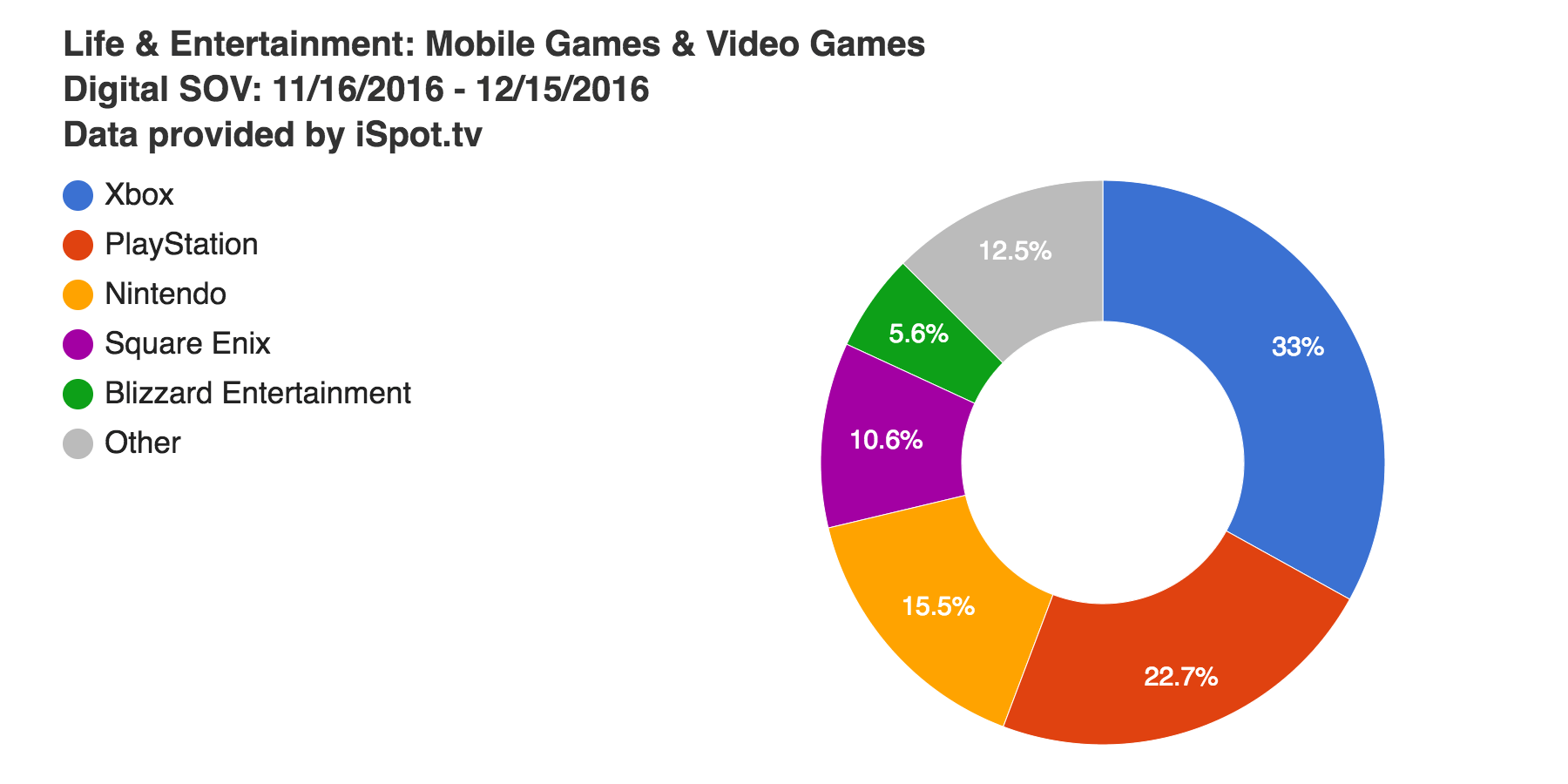 As the holidays draw closer, the big publishers are going hard on TV to make sure all their games are in your stockings this Christmas season. Over the 30-day period measured, 34 brands spent an estimated $101.1 million running 113 commercials over 23,3000 times on national TV, generating 4.7 billion TV ad impressions, 48.8 million online views, 263,000 social actions, and 398,000 searches over the major search engines.

Microsoft closed this period with a nod of approval from consumers by accounting for nearly a third of the digital response to gaming industry TV ads. Clocking in with 33.05 percent of the industry’s digital share of voice, the Xbox brand owes much of that success to one ad, “FIFA 17: The Golden Controller” featuring A$AP Rocky and James Rodriguez, which accounted for nearly 60 percent of its digital activity. While spending an estimated $38.2 million running 17 different ads 4,753 times, the brand’s ads were viewed 8.9 million times online (the Golden Controller spot accounts for nearly half of those views), mentioned 85,000 times on social and searched for nearly 80,000 times over the past 30 days.

Never far from the top, Sony’s PlayStation closed out this period in second place, accounting for 22.69 percent of the industry’s digital share of voice. Spending an estimated $27.3 million, the brand ran 11 different ads 3,151 times on national TV, prioritizing spend on ESPN and Fox — and particularly pro football and basketball programming. The brand found the most success with a campaign highlighting the many franchises on their newest console, the PlayStation 4. One ad, “The King,” alone generated 4.9 million online views and 11,000 social actions.

Nintendo takes third place, having generated 15.54 percent of the industry’s digital response to TV ads over the 30 days measured. While Nintendo ran 11 different commercials, just two of its spots prompted the majority of the response from consumers, both based around new additions to fan-favorite franchises: Super Mario Maker: “Play Everywhere. Create Anywhere” and Pokémon Sun and Pokemon Moon: “A World Beyond.” As a whole, the brand’s ads were viewed online 6.2 million times, searched for nearly 17,000 times and mentioned on social media over 15,000 times.

Although not often in our top 5, Square Enix accounted for 10.61 percent of the industry’s total digital response to TV ads during the 30 days measured. Running only four ads less than 1,500 times, Square Enix made an impression on TV viewers while promoting two new releases: Final Fantasy XV and Deus Ex: Mankind Divided. Utilizing an estimated $4.6 million TV ad budget, the brand generated 370,000 online views, 21,000 social actions and 5,100 searches. The bulk of this response was prompted by Final Fantasy XV: “Stand Together,” featuring music by Florence + the Machine.