No one questions that the opportunities for any console maker entering China are great. A report from Xinhua News Agency from late last year showed that China’s gaming market saw meteoric growth — a 37 percent jump in earnings over the previous year — thanks mostly to mobile gaming. If Sony were able position consoles to echo mobile’s rapid adoption and cement it as part of the country’s gaming culture, China could quickly become its top market.

Between the gray market, piracy, and China’s numerous game cafes, Newzoo estimates that close to 100 million Chinese have played console games in some form. The firm believes that Sony and Microsoft could sell several million systems with the right approach, though this will be difficult early on.

To best take advantage of this opportunity, Sony must position the PS4 to meet the needs of the Chinese gamer while taking into consideration the many challenges that the territory presents. Even with its lower price than Xbox One, Newzoo feels that the PlayStation 4’s cost works against Sony, especially when compared against the less expensive, piracy-friendly alternatives. But it feels that good official games localization and 100 percent digital distribution could help balance that out.

Lisa Hanson of Chinese and Southeast Asian market researcher Niko Partners suggests that taking the living room would be good positioning for Sony and other console makers.

“Game consoles will open up a new area of entertainment, that of living room multiplayer fun,” Hanson tells GamesBeat. “Gamers who have wanted a console have had ample chance to buy one over the past decade, so it is not going to be anything earth shattering, but with a legal launch and a devoted marketing strategy we can expect that consumers will learn about entertainment opportunities of consoles beyond what they already have considered.”

Hanson believes that free-to-play games can serve as good positioning while helping with China’s piracy problem.

“There will need to be a business solution to the piracy risks, which is what spawned the epic success of PC online gaming because publishers created games as a service rather than games in a package that can be copied. Similar digital distribution and online services will need to be in place to prevent piracy on consoles.

“I think we will see more and more free-to-play business models in games going forward on consoles, not only on the PS4 and not only in China,” says Serkan Toto. “It’s very difficult, at least for me, to imagine Chinese gamers spending $470 on a console to mainly play free-to-play titles like they do on PCs and mobile. But I would expect Sony to come up with a mix between paid, free-to-play and possibly subscription-based business models — provided China will allow Sony to run online services like Playstation Plus and connection speeds aren’t a hurdle.” 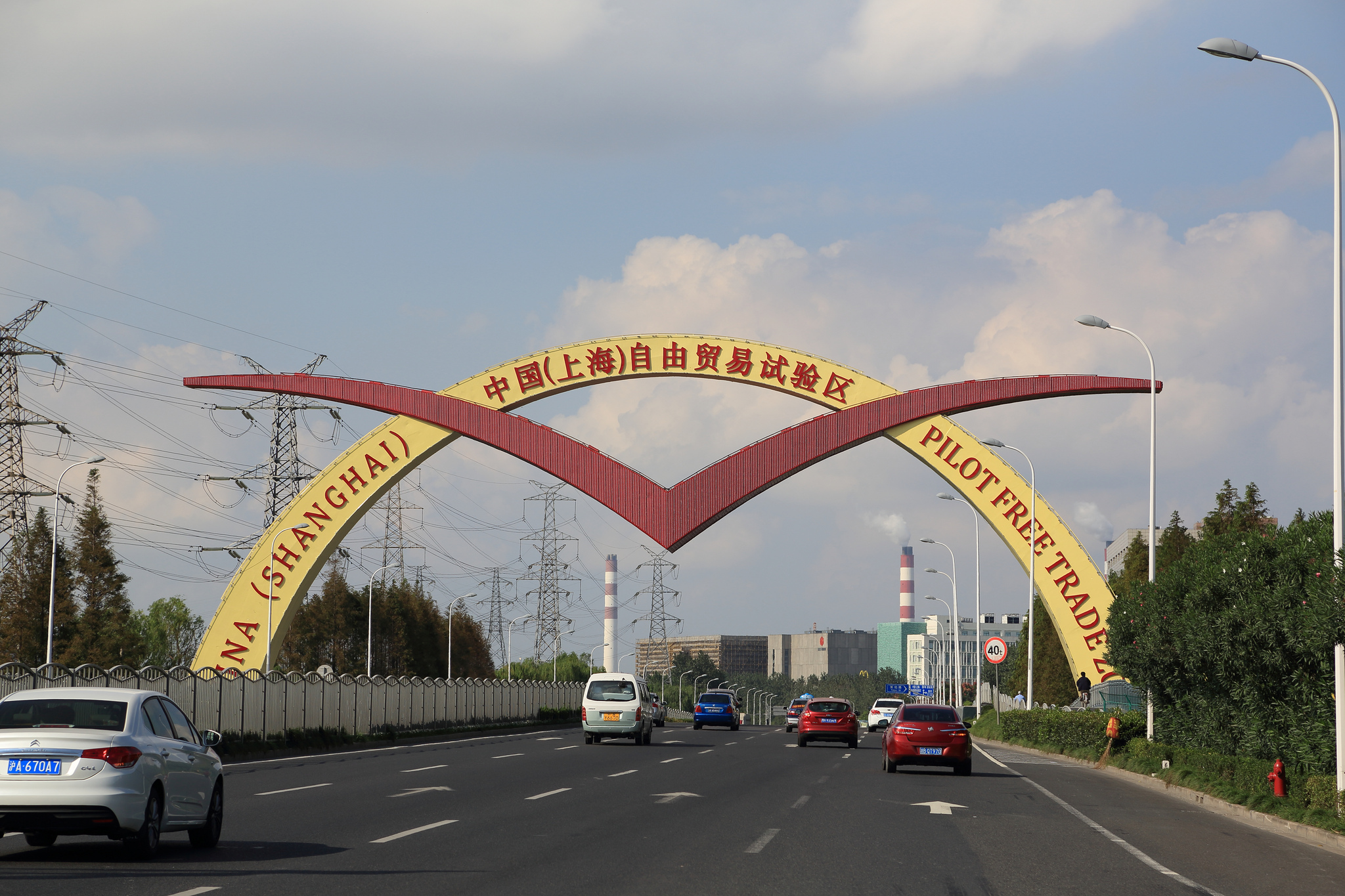 Above: One of the entryways to Shanghai’s Free-Trade Zone

China has shown a willingness to open up recently with the launch of its Shanghai Free-Trade Zone in late 2013 — a set region where the government has loosened regulations to promote trade and boost economic growth. It will establish three similar zones this year in Tianjin, Guangdong and Fujian to further stimulate the world’s second largest economy. The release on the ban of foreign-made consoles is just one part of this larger study, and the Chinese government will closely watch the Shanghai test bed. It’s the first step in opening up, but the country has a long way to go to catch up.

Prior to this month, China has never permitted wholly foreign-owned companies to operate freely, and even now plenty of limitations are in place on what kind of companies are permitted in the free-trade zone. As for Sony and Microsoft, their only way into China was through joint ventures with Chinese business partners, as regulations on foreign tech companies still hold strong. This enables China to protect its market as well as heap benefits on homeland companies.

What’s interesting about this situation is that the Sony’s and Microsoft’s efforts have them related in a way: Sony’s partner, media company Shanghai Oriental Pearl Group; and Microsoft’s partner, Internet and television service provider BesTV, are both subsidiaries of the state-controlled Shanghai Media and Entertainment Group. The new potential for a merger could make the situation even more interesting in the near future.

“It is indeed interesting that both BesTV and OPCD are owned by SMG, and in fact the rumor is that the two companies will totally merge,” says Niko Partners’ Hanson. “I have been told that SMG is 50 percent owned by the government, and also invested in by government-backed investment funds. One such fund is run by the former head of SMG. The government is also heavily involved with the console sales because of the strong regulatory structure, and that is handled by multiple government agencies and ministries.”

Sony and Microsoft are essentially sister companies here, tied together by the Chinese government.

If Sony can sustain and eventually advance, its reward will be at least a small foothold in a giant market. And it could be that Sony’s initial intent is to start small, playing this entry cautiously. Bloomberg found a FTZ filing that said that the company only plans to make 200,000 consoles annually, just a fifth of Microsoft’s goal of selling a million consoles in China.

Microsoft has slogged it out in Japan for years with the Xbox One. Despite limited sales — the Xbox One has already sold more in China than Japan — it maintains a presence because it is a strategic market.

With that small start, Sony will have to push to continually climb to make it to a point where it is relevant in a market that the PC and mobile have dominated for 14 years. If it is not able to bring Western blockbusters over, Sony will have to work hard to create compelling content that can draw the attention of a country used to playing games like League of Legends on their PCs. It will also have to bring a collection of games that will seem worth the $467 outlay.

If this works, everyone could benefit. Expanding China’s strong and rapidly growing game market with new consoles would be a win for both gamers and hardware manufactures, and this would certainly help further Chinese game development. Ideally, both the PlayStation 4 and the Xbox One would do well in China, creating a market for Chinese studios to develop new, exclusive titles that would eventually their way around the world — something that would benefit everyone who plays video games.