You need a very specific TV

The 4K television market is a mess.

Standards are starting to clear up the most confusing elements, but plenty of display manufacturers are willing to let the “4K” term do their marketing hype for them. The issue is that if you went out and bought the first 4K TV you saw today, you have a high chance of bringing home something that cannot take full advantage of the PS4 Pro’s features. Most important, you want a set that supports HDR10, which is just one of the current HDR standards.

And while you may get a TV that says it is “HDR,” it might not always support HDR10. That might mean that your PS4 won’t display HDR at all or not to its full potential. Either way, you are missing out on a key feature. Unless you know for a fact that you have a TV that can support HDR10, upgrading to PS4 Pro is almost pointless because the 4K sharpness alone isn’t enough of an upgrade.

You can guarantee that you get a compatible TV if you purchase a set with the “Ultra HD Premium” sticker on it, which is a widely accepted industry standard that used HDR10. But you probably only know that if you’ve paid close attention, and the average consumer hasn’t reached a point where they know that’s what to look for in the same way that they once learned to look for “Full HD.” And for now, getting a capable UHD Premium TV is going to mean spending around $1,500 at a minimum. 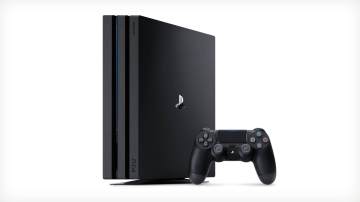 Above: The PlayStation 4 Pro in its vertical stance.

Even if you do have a HDR10 television, you don’t need a PS4 Pro to take advantage of it. Sony recently updated the original PS4 to support this functionality.

And the reality is that HDR is much more likely to impress you than 4K. At the distance you likely sit from your TV, those extra pixels are difficult to notice. An image that more accurately reproduces color, on the other hand, is easy to spot even when you’re sitting all the way back in your recliner.

So if you can get the more important upgrade with your original PS4, why get the PS4 Pro? I don’t know.

This won’t affect you if you’re done with physical media, but the PS4 Pro does not have an Ultra HD Blu-ray player. That’s a bummer since those 4K discs are among the best sources for HDR UHD content. Instead, you’ll have to settle for streaming 4K HDR video over the web from providers like Netflix and Sony’s PlayStation Store (or downloading them from providers). These will work, but they are both going to come up short in any comparison to UHD Blu-rays.

Let’s get the easy recommendation out of the way first. At $400, if you don’t own a PlayStation 4 already and you want to get one, then get the Pro. It’s only $100 more than a standard PS4 while also coming with twice the storage. It will probably last you a few more years as well, considering it should play games three or four years from now a lot better than the 2013 model.

If you already own a PS4, however, I think you should wait and see — unless you are in a specific situation where you have the right TV or the money to spare for an upgrade or you are all in on PSVR. If you don’t have the display, the cash, or the VR headset, force Sony to prove the value of the Pro to you first. I’m confident the company will establish a strong argument for the upgraded system going forward once it has more games that take advantage of it.

But you don’t have to act on an unknown, possible future. Instead, wait and see what Sony does, and then decide on the importance of upgrading.

The PlayStation 4 Pro debuts November 10 for $400. Sony lent GamesBeat a PS4 Pro for the purposes of this review.