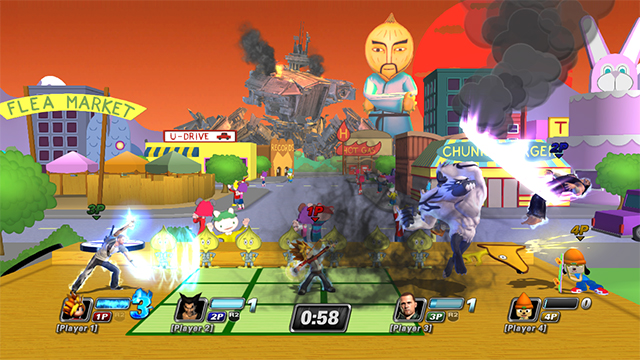 I’m one of the world’s greatest Super Smash Bros. players. This is a title bestowed upon me by a panel consisting solely of me. I just love Nintendo’s mascot brawler. I can’t think of another franchise I’ve sunk as many hours into.

So I was a bit indignant when I heard that Sony was going to make its own character-based fighting game, PlayStation All-Stars Battle Royale, which is out now for the PlayStation 3 and PlayStation Vita.

“How dare you, Sony? You think you can just make your cute little party game and hope to come anywhere close to the excellence of Nintendo’s brilliance?!”

Fast forward to after I spend a week with the game.

Not a simple clone
Yes, PlayStation All-Stars is clearly inspired by Super Smash Bros., but developer SuperBot Entertainment was smart enough to work from scratch when it comes to many of its mechanics. While Smash Bros. requires players to knock opponents out of the stage in order to score points, the goal in All-Stars is to attack your foes and build up a super meter, which unlocks three tiers of progressively stronger supermoves. The tier-1 super usually has a limited range that requires some skill to use effectively, while the tier-3 attack can wipe out a lot of characters with ease but takes much longer to build up. These supermoves are the only ones that can kill your competitors. 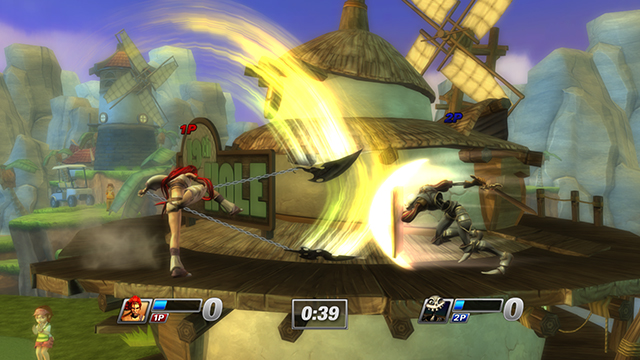 While this sounds simple, you’ll need some smart strategies if you want to consistently win. While saving up for your ultimate supermove will guarantee you some easy kills, you can score more points by using multiple tier-1 or tier-2 supers, which are usually much harder to aim. Classic risk/reward.

This is a unique, clever, and action-packed system that forces players to constantly be on the offensive. It’s a great feeling when you manage to catch the three other players in a single super, and everyone is sure to freak out when someone activates their tier-3 move.

Fun with friends
I came up with the ultimate test for PlayStation All-Stars; I would assemble members from my personal Smash Bros. group, play a couple of hours of four-player multiplayer, and see what the general consensus was. One problem: A “couple of hours” quickly turned into several.

We spent much of our time screaming and laughing. As good as the mechanics sound on paper, they work even better in practice. My group of Smash Bros. fanatics easily accepted All-Stars, and I suspect we’ll be spending many more hours with it soon. This experiment taught me the most important thing about this game: All-Stars is a lot of fun.

Crossover levels
You’ll fight your battles over multiple stages based on PlayStation games, like an airplane cargo hold from Uncharted 3: Drake’s Deception and Hades from God of War. Each level also features a crossover of its own. The Songbird from the upcoming BioShock: Infinite terrorizes players on the Uncharted 3 level, while a group of Patapons attempt to take down Hades in the God of War stage (while throwing a few spears at the players during the attempt).

It’s always fun to see two worlds mixed together in one level. I also love that you have the option to turn stage hazards off, something that I have wished Smash Bros. would do for years. 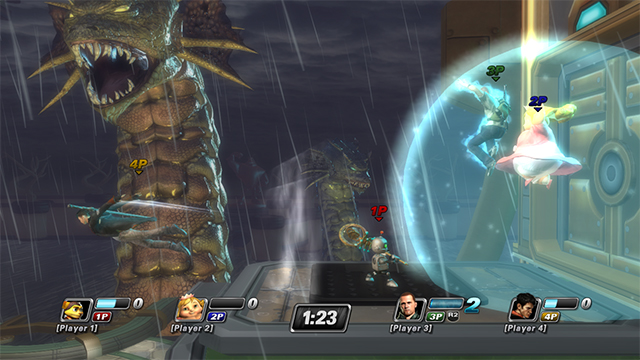 Functional online modes
Another thing PlayStation All-Stars has over its Nintendo counterpart is an online mode that actually works. It’s nothing fancy, but you can now play four-player matches against actual people if you can’t gather some friends together on your couch.

I didn’t experience any significant lag online, although some characters would occasionally blink around the screen for a split-second, throwing off a couple of my attacks. But overall, it works well enough to offer fair and competitive fun.

Questionable roster
Many of the 20 fighters you can pick from represent some of the most popular games in the industry, like the Big Daddy from BioShock and Nathan Drake from Uncharted. Others, while not as relevant as they once were, are an important part of Sony’s history, like Jak and Daxter and Ape Escape’s Spike.

But some characters really don’t belong, like the red-haired Nariko from Heavenly Sword, an early PlayStation 3 game that couldn’t live up to its own hype. It also feels unnecessary to include both good and evil versions of Cole McGrath from Infamous as separate characters. Twenty fighters is already not a huge selection, but this decision effectively makes Cole one-tenth of the game’s roster.

Others feel like Sony included them more for promotional purposes than anything else. Why else would you include Raiden, who’s about to star in Metal Gear Rising: Revengeance, over the much more iconic Solid Snake?  The same goes for Devil May Cry’s Dante, who’s sporting his new look from the unreleased reboot of the series.

I was also bummed by some notable omissions. I know that Sony doesn’t own Crash Bandicoot anymore, but how could they not work to get him in this game? He was once the mascot for the entire brand.

The promise of downloadable content eases that pain a bit, and I’m incredibly excited that Sony will offer Kat from the Vita’s Gravity Rush as a free character in early 2013. 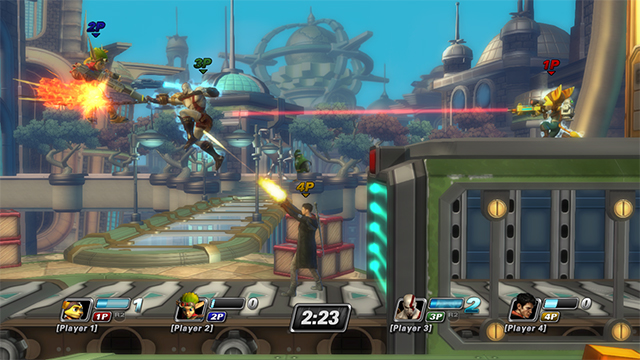 Some balancing problems
After playing a few hours, I quickly noticed that some characters were just inherently better than their peers. Fighters with fast, easy-to-aim tier-1 supers, like Ratchet and Clank or Sly Cooper, are able to earn a lot of kills in little time.

Still, I’m uncomfortable declaring any character as “cheap” after just a couple of weeks of playing. Ask any serious fighting game fan and they’ll tell you that it often takes months before you can really rank a roster. I just hope that Superbot will address unfair advantages with patches and updates, something Nintendo never did with Smash Bros.

The endless comparisons to Super Smash Bros. may seem unfair, but the reality is that most consumers will take one look at PlayStation All-Stars Battle Royale and immediately compare it to Nintendo’s popular series. Luckily for Sony, All-Stars stacks up well against such fierce competition. This game offers a potential for endless hours of fun.

We all expected a knock-off, but this fighter has an identity that’s completely unique.

PlayStation All-Stars Battle Royale comes out on Nov. 20 for the PlayStation 3 and PlayStation Vita. The publisher provided GamesBeat with a PlayStation 3 copy of the game for the purpose of this review.