PlayStation Plus members amassed an impressive library of games over the past 11 months — that’s a form of “user engagement” mobile games just can’t beat.

Reddit user A-Dark-Injection crunched the numbers and found that from June 2014 to May 2015, Sony gave out $1,354.76’s worth of games for its premium membership service. Those who sign up for PS Plus can play these games as long as they have an active subscription. Sony refreshes the lineup of free games every month, giving the PlayStation maker a way to keep players within its ecosystem — and outside of Microsoft’s and Nintendo’s — and boost user engagement.

Paying for PS Plus is also the only way PlayStation 4 owners can go online and play with their friends. It costs $50 a year.

You can see the full info graphic below (click it to see a bigger version). 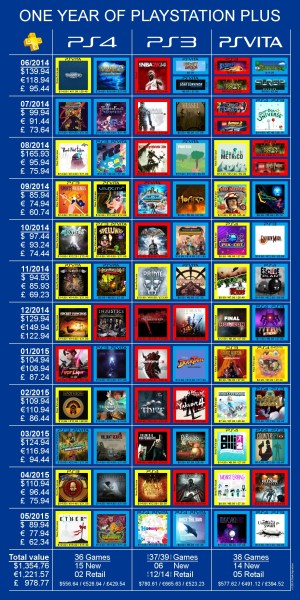 A-Dark-Injection also provided the following notes in the Reddit thread.