Advancing one of the big alliances in social casino games, Playstudios is launching a mobile version of its social casino slots game MyVegas in partnership with MGM Resorts International, the owner of a host of casino and entertainment properties in Las Vegas and around the globe.

Playstudios is using its popular free-to-play social casino game to pioneer new real-world rewards for its players. If players play the game enough, they can earn rewards such as stays in MGM’s Las Vegas hotels such as the Bellagio, Mandalay Bay, and The Mirage. The company launched its Facebook game in May 2012 and it reached more than 4 million players, including 250,000 that are active on a daily basis. Now it is launching MyVegas Slots for Apple’s iOS and Google’s Android mobile devices.

MyVegas is also adding four new rewards program partners, including Cirque du Soleil, House of Blues, Sugar Factory, and the Las Vegas Monorail. That means players will be able to earn prizes from those partners and cash those “comps” in Las Vegas and elsewhere. More than 100,000 players have already redeemed more than $10 million worth of real-world rewards as part of the Facebook game. The number of players might seem small compared to social casino game operators like Zynga, which has tens of millions of players.

“We have create our own unique flavor of casino games and complemented that with reward world rewards,” said Andrew Pascal, chief executive of Burlingame, Calif.-based Playstudios, said in an interview with GamesBeat. “You journey through your own virtual Las Vegas and earn rewards. It adds a whole meta layer to the experience. We’ve taken the lessons and applied them to our mobile product.”

Pascal spoke on a panel dubbed “The new age of game rewards” at our GamesBeat 2013 conference last week. 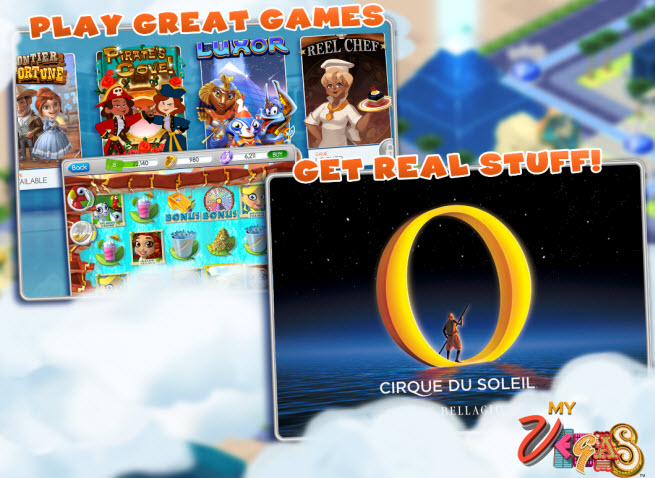 Above: MyVegas rewards include free shows with Cirque du Soleil.

He said that his players are extremely valuable because of the connection to the reward programs. Las Vegas hotels spend tons of money on advertising to try to get people to come  to their resorts. But MyVegas has loyal players who play for both fun and rewards, and they’re getting exposed to the MGM Resorts brands in a big way.

“In all the metrics that matter,” Pascal said, “such as average spend per average daily user, average revenue per user, and percentage of players that monetize, we do better.”

More than two-thirds of the responses that come back to marketing efforts come via mobile devices, Pascal said.

“Up until now, we couldn’t accommodate them,” he said.”We expect that are business can more than double or triple thanks to mobile.”

The customers play a free-to-play casino game that does not constitute real-money gambling. Players can spend money in the game if they want, but they can’t cash out — except by winning partner rewards. Players can earn points in virtual slot games based on properties such as Mirage, Excalibur, New York New York, Frontier Fortune, Pirates Cove, and Luxor. Players try to win chips, loyalty points, status, and real-world rewards.

MGM’s properties are plentiful, spanning resorts, restaurants, and shows. It has its own loyalty rewards program, M Life, and MyVegas has been integrated into it.

“MyVegas feels like an extension of the rewards for the M Life program that we have,” said Tom Mikulich, senior vice president of business development for MGM Resorts International, in an interview. “MyVegas is a tremendous channel. When we send out offers, many people don’t open them. But the customers on these games may play 22 minutes per session, three times a day. We create a bond with the customers through MyVegas. And the next time they book, they book through us.”

Mikulich said his company has 40,000 hotel rooms in Las Vegas, of a larger market of about 170,000 rooms or so. His goal is to fill his rooms with players acquired through apps such as MyVegas.

“What’s important is to leverage rewards in a way that is totally contextual for your game,” Pascal said.

So that doesn’t necessarily mean that rewards will work with any kind of game.

“We have figured out the model and the way to do it, and there’s a lot of complexity,” Pascal said. “Our loyalty program that we have built is one of the most complicated out there.”

The cross-promotion between MGM and Playstudios adds up to big marketing for the social casino game. Over the next six weeks, Playstudios is doing a MyVegas meetup tour across nine cities. MGM, for instance, advertises the app heavily across Las Vegas, putting it on the backs of hotel room cards.

“The community being built in the game is incredible, as people who never met each other now get to meet in real live,” Mikulich said. 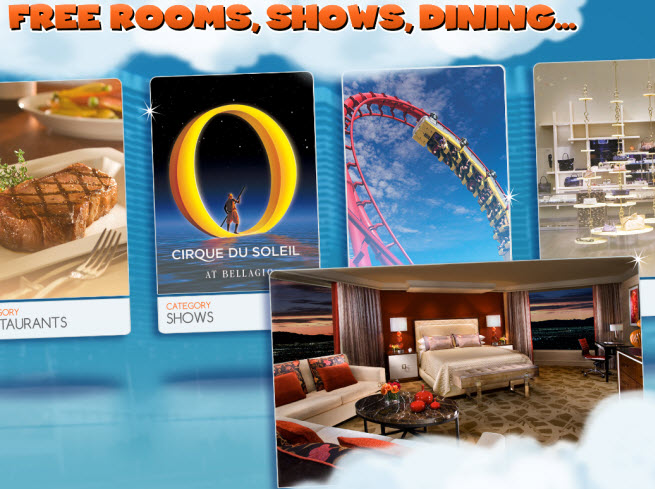