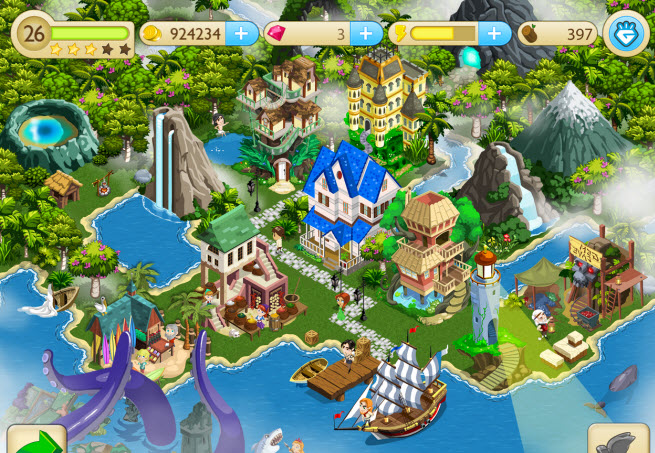 With more than 100 million downloads to date, Pocket Gems has made it into the top ranks of mobile game companies. The San Francisco-based mobile game publisher is only a few years old, but it has built itself up to more than 150 employees on the backs of free-to-play casual games such as Tap Farm and Paradise Cove (pictured above).

The “mobile first” company has done so well that it believes it has staying power and the ability to produce multiple hits, said Ben Liu, chief executive, in an exclusive interview with GamesBeat. Back in early 2011, Pocket Gems had only 10 people. The numbers suggest that Pocket Gems is building a real, sustainable business on mobile platforms even though it isn’t the maker of gigantic blockbusters such as Angry Birds.

“These are meaningful milestones for us,” he said. “December was the best month that we ever had in terms of revenue growth. We have done it all profitably, and we have really strong business metrics such as strong user engagement.”

A number of its older games such as Pet Hotel are still doing well on the app store, and so are the newly released titles, said Liu, who was recently promoted from chief operating officer to chief executive officer. Tap Zoo, which launched in the fall of 2010, has been running for 2.5 years and it is still generating revenues. Overall, Pocket Gems has more than 20 live games, and, on average, most the games grow their daily active users for the first year or so. Because the company can cross-promote titles within its own network, it doesn’t have to do as much paid advertising. The good thing, Liu said, is that mobile advertising rates have flattened out after rising a lot last year.

What’s the secret to launching multiple hits? The games all feature a lot of interactivity and animation for mobile titles. In that sense, Pocket Gems tries to push the visual experience for mobile players, Liu said.

According to App Annie, Pocket Gems was the No. 10 publisher of games on iOS (which runs on Apple iPad, iPod touch, iPad mini, and iPhone). And of the 150 employees, 33 are from 10 different countries, working with H-1B visas. The company is starting to develop capabilities for localizing mobile titles in different territories, but so far everybody is based in the U.S. The vast majority of its business is on iOS, but Pocket Gems is expanding into Android.

As a mobile first developer, Pocket Gems is focused on creating unique games that make use of the features of tablets and smartphones.

“We want to create new forms of entertainment,” Liu said. “As far as unique content goes, we don’t have specific announcements there but you will see interesting things from us in the next couple of months.”

Pocket Gems is also looking at expanding in international markets.

“International expansion is an important focus for us. We are starting to explore different paths and think about what makes sense for us,” Liu said.

When asked about Kakao and Line: he said, “Like everyone else, we’ve seen Kakao in South Korea and Line in Japan take their respective markets by storm.” (Update: That doesn’t mean that Pocket Gems is in talks with those entities).

As it does so, the company will remain focused on hiring the best talent, he said. It is also leveraging its own distribution strength. The company has published third-party titles such as Amazing Ants, which was developed by Twyngo and hit No. 1 on the iPad. Over time, Liu believes Android and Amazon will be good growth platforms for Pocket Gems in the future.

Pocket Gems was founded in 2009 by former Stanford University student Daniel Terry and fellow co-founder Harlan Crystal. Pocket Gems became a big player in free-to-play mobile gaming with Tap Zoo and Tap Pet Hotel, the No. 1 and No. 4 top-grossing iPhone apps of 2011. Terry was the initial CEO and he gave the title to Liu so he could focus on game creation.