Pocket Gems and Universal Studios are launching an interactive story for the Episode mobile app based on the Pitch Perfect films. The partnership comes ahead of Universal’s holiday release of Pitch Perfect 3 film.

Pocket Gems’ Episode platform is a comic-book style mobile app that allows fans to choose story paths in interactive tales. It is particularly popular with women and girls, and San Francisco-based Pocket Gems has had great success with other entertainment tie-ins that appeal to the same demographics.

The Pitch Perfect story will debut on Episode later this year. More than 3 billion episodes have been viewed across 50,000 stories that have been posted on the Episode app.

Previous brand tie-ins for Episode include Pretty Little Liars and Mean Girls. Those partnerships have helped Episode grow its ranks of fans to its interactive mobile platform. Universal, meanwhile, will run a contest in the app where the winners will get access to the “VIP Experience” at the Universal Studios Hollywood theme park. With such promotions, Universal can help the Episode app stand out from a million other mobile apps. 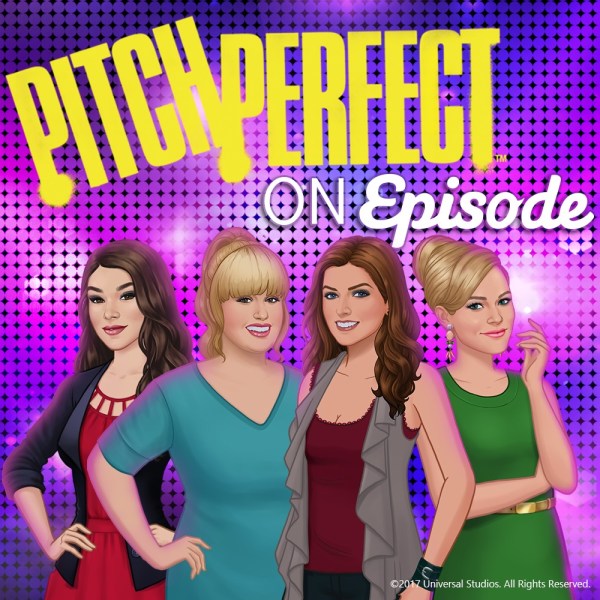 Above: Pitch Perfect 3 is coming out as a movie at the same time it debuts on Episode.

Pocket Gems is creating an animated story with an original plot, Pitch Perfect: In Deep Treble, based on the characters from the films. In this story, the audience can choose the direction the story will lead. App users can create their own stories and post them on Episode.

From July 20 – August 10, writers will be eligible to get in on the action of Pitch Perfect on Episode. Episode is calling upon writers to create their own comedic stories on the platform. Two creators will be flown to Los Angeles in the fall of 2017 to enjoy a “VIP Experience” at Universal Studios Hollywood, including a guided tour of the theme park and movie studio backlot, front of line privileges to all rides and attractions, and a gourmet lunch prepared by the theme park’s executive chef. Winners also will attend a creator’s workshop with Episode writers and get an avatar cameo in Pitch Perfect: In Deep Treble.