The iPhone has generated more than 63,000 apps worldwide. But no one has figured out the magic formula behind making a hit for the device.

Bolt Creative is one of the lucky iPhone app developers; it’s a case study on how to create a hit without a lot of resources. The two-man team created Pocket God, a cartoon-style game where you play a god ruling over the pygmy natives on a remote island.

It may not sound like much, but its cuteness and addictive game play have led to more than 1.2 million downloads. In an interview, the company revealed secrets to its success than any app developer would want to know.

At 99 cents a piece, the game has generated a steady income for Bolt Creative’s Dave Castelnuevo and freelance artist Allan Dye. They’ve made as much as $18,000 a day from it. And the two have figured out how to keep it generating revenue on a weekly basis, via updates to the game.

The 38-year-old Castelnuovo is a longtime veteran of the video game industry who built a lot of games for the Sega Genesis. In the dotcom era, he branched out as an Adobe Flash programming consultant.

More recently, he helped World Golf Tour develop a novel golf game that let you swing a club and watch the results on a virtual golf course that was based on videos of real courses. But slowly, the siren song of the iPhone drew his attention.

Getting started while working a day job 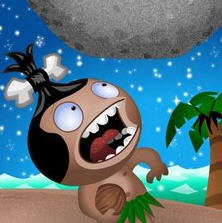 In September 2008, Castelnuovo started toying with developing an app. He was still working 60 to 80 hours a week for World Golf Tour. But then he set himself a goal. How much could he program for the iPhone in 10 hours? Soon enough, he tried to see how much he could do in a weekend.

Castelnuovo had lunch with his friend Dye, who is also 38 years old and an experienced artist. They thought they could do an iPhone game quickly, and they didn’t want it to interfere with their other consulting work. Dye signed on as co-creator, to share equally in the game proceeds. But he stayed freelance and did not become an employee of Bolt Creative.

The pair had worked on a small game for Cisco about three years ago. It was a training game — you could drag characters that looked like zeroes and ones around a screen and drop them onto platforms to make numbers. They thought they could use that same kind of action in the iPhone game.

Castelnuovo then threw out the idea of an island with little guys the size of your fingers that you could do different things with. You could interact with them, like running your hands through the water of a koi pond.

Dye immediately started sketching the characters. Because they were doing something quickly, Dye made the characters really simple and cute so they would be easy to animate.

The simple art style worked better, since they didn’t want to sink a lot of time into development. Dye also wanted to make them kind of iconic looking, so they would look good by themselves on a hat or T-shirt. They didn’t have high expectations that it would be a big seller. So they decided to incorporate a “sick sense of humor,” where you could throw the characters into the water and watch them drown. Castelnuovo came up with the name Pocket God, which struck a chord. The player is the god, and the characters live in the iPhone in the pocket.

By November, they were working on it in earnest. Between Christmas and New Years, they worked on it full time. They finished the game, submitted it to Apple on Jan. 3, and then saw it appear on the App Store on Jan. 9. A half-dozen fans reviewed it and offered valuable feedback. Some said it was fun for five minutes and then got boring.

“I found that if I responded to what they wanted quickly, they would fall in love with us,” Castelnuovo said.

The team’s work is never done

Castelnuovo kept a blog diary so that fans could keep up. The game had absolutely no publicity in the early days as the duo revised it. Some young fans made video reviews of it that they posted to YouTube. The game spread by word of mouth. People talked about it on Twitter. Every blog post drew dozens of comments, many of which prove helpful in improving the game.

Bolt Creative released updates, or new episodes, every week. It was almost like a TV show, with a new episode at a regular interval. It made sense to do so, as they could create new characters or themes for the gods. One of the strokes of brilliance was that they changed the icon that shows up on the iPhone dashboard whenever they had a new update. Someone could simply look at the phone screen to see there was a new version of the game to play.

A month after the release, the game took a leap on the iPhone. It hit the top 50 on the AppStore for paid apps of any kind. Then it shot up to the No. 2 rank, holding that position for two to three weeks. In the beginning of March, the game hit No. 1. Castelnuovo and Dye were ecstatic.

For the month of March, they held the No. 1 position for 26 days. The were knocked out briefly by a video app related to the NCAA March Madness basketball tournament. It was a thrill when Pocket God took back the No. 1 position and continued its ride. During the ride toward the top, Apple never promoted the game on its web site, as it does with its “featured apps.” But once the game was at No. 1 for a couple of weeks, Apple started doing the promos, helping it stay at No. 1.

The two men pondered raising the price of the game, but they decided to go for sheer numbers instead. They’ve started a new game that they expect to finish in three months, and they’ve hired a licensing manager to take Pocket God to other game platforms. All the while they are still doing weekly updates. Some of them were delayed because Apple got a flood of new apps with the launch of its iPhone 3.0 software. 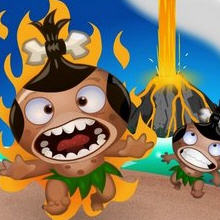 In mid-April, they faced a challenge from iDracula, a vampire game. The Pocket God guys fought back with their own satire, HiDracula, to poke fun at their rival. Even after they fell from their No. 1 perch, the app has consistently stayed in the top 10 apps. That’s pretty staggering for a game that has had no advertising.

Some of the big game web sites still haven’t reviewed the game. So it’s possible that the game will rise again if there’s publicity. Castelnuovo has money, but he has decided not to advertise.

He’s monitoring the numbers closely through an analytics site, Heartbeatapp.com, which presents the sales logs in an easily readable form. He also pays attention to 148apps.com, which also provides performance metrics on iPhone game sales. Bolt Creative can find out things such as the number of unique users or how much piracy is happening. For Pocket God, that number is about 10 percent, but Castelnuovo has heard from others that piracy can actually be as high as 50 percent.

[youtube=http://www.youtube.com/watch?v=duVLk7TjY-Y&w=425&h=344]
Castelnuovo is watching the fans, some of whom are so passionate that they’ve created Pocket God stuffed animals, comics, and songs. (see video) Although Castelnuovo is working on a new game, he isn’t contemplating raising money or hiring more people. Now he is working full-time on the iPhone game business, with just one day a week for consulting. 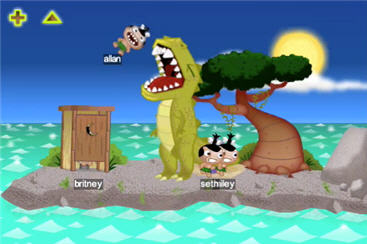 If he decides to take on investors, it will only be if he has a spectacular idea that requires more investment. He is an experienced game developer. And what matters to him now is creative freedom. He doesn’t enjoy “company building.”

“We want to build a profit, create a nest egg, and then take more creative risks with our next game,” he said. “We aren’t under pressure to make the next game into a home run. I have my eye on the future. I want to progress in an intelligent manner, like some of the better independent developers.”

[Want to learn more tricks about how to build and market your app appropriately on mobile platforms, such as the iPhone? Join us at MobileBeat 2009, our mobile conference Thursday in SF, where we’ll feature a panel devoted to this. Sign up soon.]