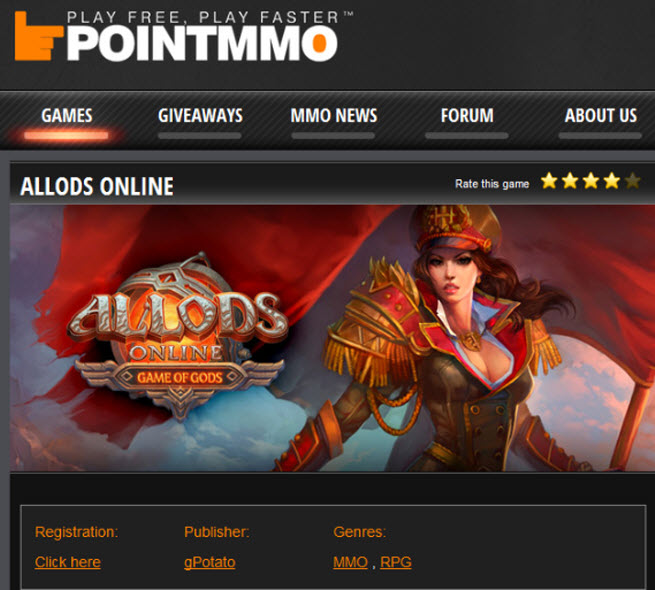 Digital distribution is all the rage these days. But none of the current players focus on distributing massively multiplayer online games from different game publishers. That’s exactly what PointMMO is doing, we learned in an exclusive interview with the company.

The Berlin and Singapore-based company is unveiling its platform today to make free-to-play MMOs available for users to play in a quick and easy way. The portal uses progressive downloading, which speeds the time it takes to download a playable client to the gamer. When you click on a game, the platform sends the parts of a game that you need to get started and then proceeds to send the rest in the background as you play. It delivers a near-instant game experience, in contrast to most MMOs, which require you to download gigabytes of data before you start.

“We will be a single point where you can come to enjoy a huge variety of games,” said Kay Gruenwoldt, the chief executive of PointMMO, in an interview with GamesBeat. “We see this as an opportunity to cater to the MMO players.”

Gruenwoldt believes that the site will attract seasoned MMO players who enjoy playing a variety of games and have more experience with the MMO style of play. Those players are likely to be more valuable to game publishers over time, he said. Players can sign up for the closed beta test, which will begin in the coming weeks.

Players register at the site and then PointMMO installs a program that is about 500 megabytes of data on your computer, much like the Unity 3D platform installs a plug-in to enable 3D gameplay. Then you can pretty much progressively download any MMO that is on the site. For players, it will be the fastest way to access and play MMOs, said Gruenwoldt.

Rather than take a 30 percent cut as other platform owners do, PointMMO takes a fee for each player registered. The company has 10 games signed up so far, including launch titles World of Tanks from Wargaming.net and Age of Conan from Funcom. The portal will give developers the ability to self-publish their games and distribute them to a targeted audience.

The company was founded earlier this year and has 25 employees. Rivals include Steam, Electronic Arts’ Origin, and Amazon. Unnamed private investors have poured millions of dollars into the company. Gruenwoldt previously ran Frogster America, the publisher of Runes of Magic, and held positions at Nokia, Crowdpark, and Games Academy Vancouver.