Pokémon Go is a phenomenon.

The Niantic-developed augmented reality game is already awash in great news for Nintendo: The Japanese publisher’s stock has risen 25 percent, it’s bringing in money, (and setting records along the way), and roughly 7.5 million people have already downloaded it in the U.S. alone, all within a week of the game’s launch. It’s making people late for work and is now on more Android phones than Tinder. Let that sink in for a bit.

The full reach that Pokémon Go might have is anybody’s guess at this point, but already, Go has captured millions, including me. After spending time with the beta test, I was impatiently waiting to be able to play Go again. And Pokémon Go is quite good. It’s a lot of fun — more fun than some are giving it credit for — and it’s already become an obsession.

But as much as I’m loving my time with Pokémon Go — I’ve been playing it on my iPhone 6 — a lot could be better. Go’s potential legacy could outlast its flawed beginnings: other success stories like Destiny, World of Warcraft, and even Facebook all launched in initial forms that were much different from what they ended up becoming.

Similarly to the nearly forgotten Pokémon Dream Radar on the 3DS, Pokémon Go is an AR app that lets you use your phone to find, collect, and capture Pokémon in the real world.  Pokémon can spawn anywhere: Landmarks, businesses, and even memorial benches all of a sudden gain new importance in one of two ways. They can either be PokéStops — a quick walk to one of these lets you pick up items — or Gyms, where you can battle other trainers as part of one of three teams (Red, Blue, and Yellow) once you’ve reached level 5. 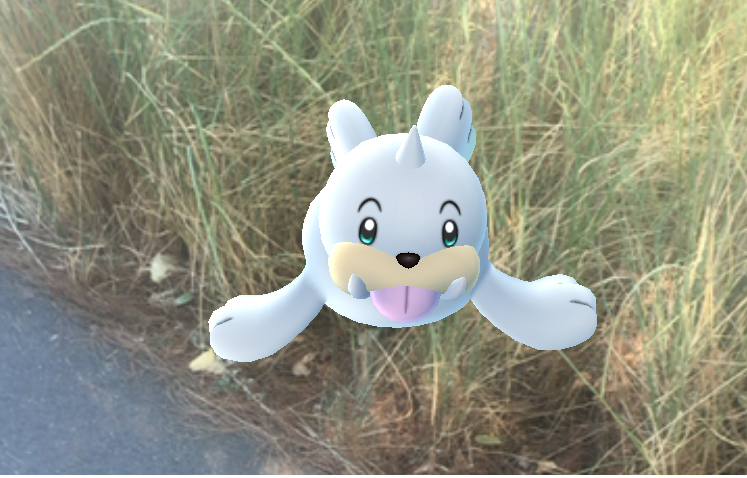 Above: Seel, what are you doing out of the water?

It’s the exploring and discovery elements that sell Go, and you’ll never know where a monster might be hiding: I woke up Saturday morning and caught a Rhyhorn … without leaving the bed. I’m sure I’ve explored more of my neighborhood in the past few days that I have in the past two years, and Go continues to give an incentive for doing that — every trip outside is now an adventure. I’ve found locations I didn’t know existed, and I’ve met and talked with other players at PokéStops at all hours of the night. Pokémon Go is bringing players together, in the real world, on a grand scale.

And so far, this is probably Go’s largest success: Its mission to get players outside and talking has already shown unprecedented success for Nintendo in the mobile space (the publisher owns one-third of The Pokémon Company and its associated with the franchise). I don’t want to downplay the significance of this: Go has already, in its own way, became a sensation. It’s achieving what it set out to do, and it’s doing that in a quite successful manner.

Pokémon Go’s has been plagued with issues. It launched on Wednesday to massive server outages. The Pokémon Trainer Club servers were down for several days — meaning anybody who opted to use Pokémon’s own log-in credentials (as I did) instead of Google was stuck being unable to sign in.

Things have gotten better, though the PTC servers have gone down a few times. It’s frustrating an app launches and it doesn’t work for long periods of time. I’m going to keep giving Go chances to work, but other mobile users may be less inclined to come back to a game that wouldn’t let them log in.

Go has other tech issues besides overloaded servers. I’ve had to restart the app more times than I can count. It almost has more problems, glitches, and bugs (and no, I’m not talking Weedle) than it might be worth listing. It crashes or locks up. Its loading times are variable. Go seems to slow my entire phone’s performance down, multitasking (with an iPhone 6) caused issues for a while, and the battery saving mode will sometimes just turn itself off. The glitches and server issued combine vary from being slightly annoying to making Go downright unusable at times.

And the battery drain is also horrible. For a GPS-heavy game, it makes sense, but it’s still bad. 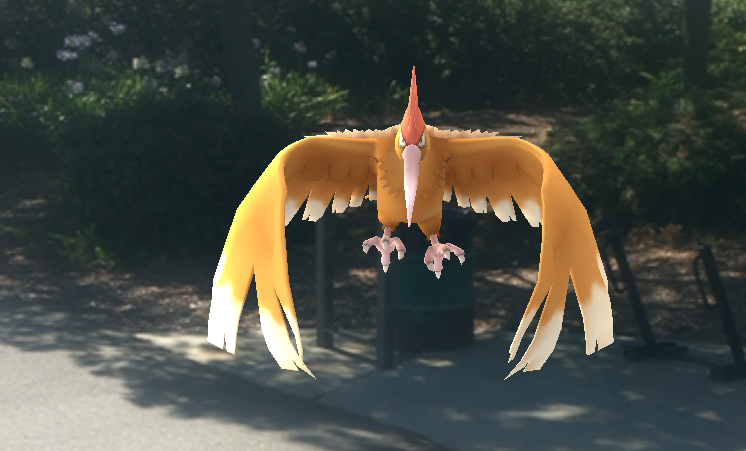 Above: Flying Pokemon can be harder to catch. Aim those PokeBalls carefully!

One aspect of Pokémon Go that I’m surprised hasn’t been talked about more is just how little emphasis it actually places on building relationships with individual Pokémon. The way Go works, it floods you with hundreds of Pidgeys and Rattatas, and they end up serving just two purposes: gaining experience and trading-fodder for the Professor so you can get candy to evolve your monsters.

Combined with the ways that Gyms work — you leave your Pokémon behind at a gym to defend it — Pokémon Go places the least amount of emphasis on actually bonding with your monsters than almost any another game in the series. For most players, this intimacy may not be vital, but for a series that has spent years teaching you to connect with your digital pals, it’s weird to see them reduced to such an expendable extent.

Pokémon Go is successful, but it could be so much more. Some of these functions — like trading — are confirmed to be coming. But Niantic needs to keep an eye on other things as well. Go has created a massive user base — and it needs to find a way to sustain and keep people coming back after the initial hype has died down. Given Niantic’s history running Ingress (which much of Pokémon Go draws upon heavily), I’m hopeful that it can do this.

Right now, friends of mine — folks across the country who never get into video games — are playing this app. I’d love to be able to interact with them — somehow — or at least be able to see what other players are doing (perhaps a way to make a friends list and look at their journals?). Go has created a huge community, and that social aspect need to expand beyond just what it’s doing with players that meet up locally.

In fact, Go has no way for players to communicate with each other. It has no chat options — something Ingress has. It has no way to check where PokéStops are outside of your direct vicinity (hence all the fan made maps you’ll see online already). You also can’t battle other trainers directly. These are all things that could come to Go or change in the future (especially since Ingress has some of them).

Some locations — I’ve seen this online outside of my own experience as well — that should be lush with Pokémon just aren’t for some. A local river was seemingly too remote for Pokémon Go to fill with any monsters to catch. It’s going to be harder for new players to jump in as Gym levels continue to rise, and Go doesn’t notify you if you lose control of a gym, either. And some changes — like the footprints replacing actual units of distance that tell you how close you are to a Pokémon, are actually steps in the wrong direction from the beta test. The journal (an addition from the beta I really like) quickly becomes useless, as it shows you just a snapshot of your progress as you stuff it with achievements. You can only hatch Eggs while the app’s running; it can’t track your steps unless it’s open, not even tapping into Apple’s Healthkit that tracks your steps.

Niantic still has some work to do.

Pokémon Go is marathon, not a sprint: It’s something that I’m legitimately worried about spending too much time with while yet also harboring concerns about its longevity. But even lacking functions and with tons of problems, Go has still managed to entice players around the globe to catch ’em all … outside the comforts of their homes. It’s already seeped its way into popular culture, and it’s something that I hope has the ability to sustain itself and continue to be enjoyable as Niantic adds features and fixes the current issues. And it may be easy to forget, but what other app ever has had people meeting up in parks and playing together at 1 a.m.? Exactly.

Despite its problems, Pokémon Go is something that I’m going to be playing for a long time to come (I mean, I have to catch ’em all, right?). Go has a solid base, and if Niantic can sustain and cultivate the community and Go as a platform, it has real potential. And by that measure alone, it’s quite a success, even if it still has a lot of room left to grow.

Pokémon Go is out now for iOS and Android in Australia, the United States, and New Zealand. GamesBeat downloaded the game from the Apple App Store for the purposes of this review.