It’s 9:15 a.m., and as I was sitting down to write this post, my iPhone buzzed. I looked, and a Pidgey sat on my keyboard. I just had to catch it — making me even later for work than I already was. 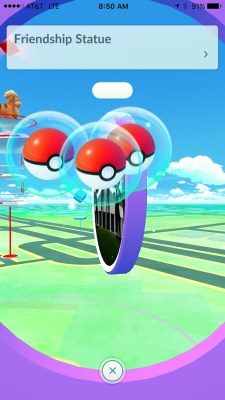 Above: The Friendship statue at the local community center held a surprise — Pokéballs!

After dropping my kid off at summer camp, I usually dive into my workday around 8:45 a.m.-8:50 a.m. But today, I found myself already behind as I fiddled with Pokémon Go, the augmented reality mobile game that launched yesterday in the United States. It uses Niantic’s location-based gameplay to plant the pocket monsters, battle gyms, and other goodies around you in the real world. This free-to-play app is a landmark in a series that has shipped 275 million video games worldwide and is estimated to bring in $2.1 billion this year as one of the world’s largest brands — making it a major force in the $36.9 billion mobile gaming market.

I was on-time until I dropped my kid off at summer camp. Then I decided, what the heck, might as well see what Pokémon Go does with this boring city community center. As I walked around, I found two PokéStop, which turn points of interest like fountains into chances to snag some gear and other items. The first was a friendship statue on the center grounds, and when I flicked it, I bagged a few Pokéballs (the red-and-white spheres you use to catch Pokémon). Next to it was a memorial plaque, which also gave me some loot. Even the center’s sign turned into a stop, though I was driving and decided I shouldn’t stop in traffic and try to bag some items.

When I got to my neighborhood, I turned on Pokémon Go and decided to see what I would find. I pulled into alley behind my house, and the phone buzzed — a Pokémon lurked nearby! I stopped my car right there in the alley. A Venonat sat on my dashboard — but not for long, as I snapped a picture and flung a Pokéball at it, capturing the critter.

And I couldn’t resist walking outside once I parked my car in the garage. After just a few steps, my phone buzzed again, showing me a Pidgey sitting right in the middle of the alley. Flick! I captured that one, too.

Pokémon has never been my thing — heck, I didn’t even try the series until I was nearly 40. Yet Pokémon Go intrigues me. The idea that monsters could be hiding in my fridge, behind my couch, under the bush across the street, or near the fountain by our community center pulls at the collector in me. Heck, at this point, I’m not sure I’ll even fight my critters — the first gym I saw was for Level 5 trainers, and I was just a Level 2 noob. But that’s OK — the classic gotta-catch-’em-all tagline shows that even Pokémon haters like me could find some fun in Go.

Even if it makes us late for work. Above: Hey, kid, I have something for you in this back alley. …