Pokémon Go has been hitting the gym, and it’s showing off some new features starting today. Developer Niantic unveiled updates to its gym system as well as a preview of a new Raid Battle feature that will roll out later this summer.

Pokémon Go became a pop culture sensation last July, breaking mobile game records when it hit $600 million faster than any game before. By walking around in the real world, players could find virtual Pokémon to catch in-game. They could also visit virtual PokéStops placed in the real world to earn items and gyms, which players can conquer through battle to earn items, PokéCoins (in-game currency), and Stardust (an item to increase your Pokémon’s power).

In the update, gyms will no longer have prestige and levels, which used to play a big part in how gyms worked. In the previous version, players could assign their Pokémon to defend a gym, and each time a Pokémon was defeated, the prestige of the gym dropped. As attacking players knocked down the prestige, the gym would also lose levels.

The new Pokémon Go replaces prestige and levels with a new gym badge system as well as Pokémon motivation. After players have taken over a gym by stationing Pokémon in its six available slots, they can increase the gym badge from bronze to gold by interacting with it. Interactions can either be battles or feeding their Pokémon with berries, a new form of interaction that raises their Pokémon’s motivation levels.

Motivation is tied to each Pokémon’s combat power (CP), which is essentially its strength in battle. If a Pokémon is left alone for too long without being fed berries by its owner or the owner’s teammates, its motivation level and CP will drop, making it easier to defeat in battle. It’s a move to get players to interact more with gyms on a daily basis, and along similar lines, Niantic is also adding daily item drops at gyms, similar to the ones that can be found at PokéStops.

Battle order at gyms is also getting an update. In the previous version of Pokémon Go, players were forced to battle the Pokémon from weakest to strongest. The new battle order shuffles this around so that players will battle the Pokémon that’s been at the gym the longest. The change was made to balance out the gym battles so that players’ Pokémon aren’t all depleted by the time they reach the strongest opponent.

In a few weeks, Niantic will also be rolling out its new Raid Battle feature, where rare and sometimes legendary Pokémon will spawn at gyms and players can team up to battle it.

“Raid Bosses are a new social co-op mechanic in Pokémon Go,” said Edward Wu, director of software engineering at Niantic, in an interview with GamesBeat. “We already feel like we were a very social game. Last summer, you’d see droves of people go to the park together, bring their friends and family, point out to each other like, ‘Hey look, there’s a Pokémon you should catch over there.'”

Before a Raid Battle, an egg will spawn at a gym with a countdown timer to when the Raid Boss will hatch as well as information about its level of difficulty. If players want to fight the Raid Boss together, they have to go to that gym’s location and hit the “battle” button at the same time when the egg hatches. There will also be a Private Raid system using a customizable code if players want to form a private party with just their friends.

“We didn’t have any explicit social mechanics, those were all implicit,” Wu says. “But now we actually want to do players justice when they cooperate with each other by having an explicit social mechanic where if you group together and battle together you’ll be able to take on some really tough rare and powerful Pokémon in the game with the chance of even capturing them and getting exclusive items after you beat them.”

Niantic seems to be making more proactive moves to capitalize on the social behavior of its players. It frequently hosts in-game invents, such as its Fire and Ice Solstice Event earlier this month, which featured more fire-type and ice-type Pokémon for players to catch. On July 22, it’s also hosting its first official real-world event, the Pokémon Go Fest in Chicago, which fans can buy tickets for starting today. Archit Bhargava, global product marketing lead at Niantic, said in an interview that part of their live ops strategy is to do real-world events in addition to the successful in-game events.

“We feel like those live ops events really excite the community and energize them and provide an incentive to go out and play and catch the Pokemon they don’t have and complete their Pokédexes,” said Bhargava.

“Spending appears more reflective of how compelling players find the various events. Some have clearly driven far more spending than others, something we’re sure that Niantic is monitoring and considering when planning future events,” said Randy Nelson, head of mobile insights at SensorTower. “Since we’re still so relatively early in the lifespan of Pokémon Go, we’re likely seeing a lot of experimenting with the various levers the developer can currently pull to affect different spending behavior.” 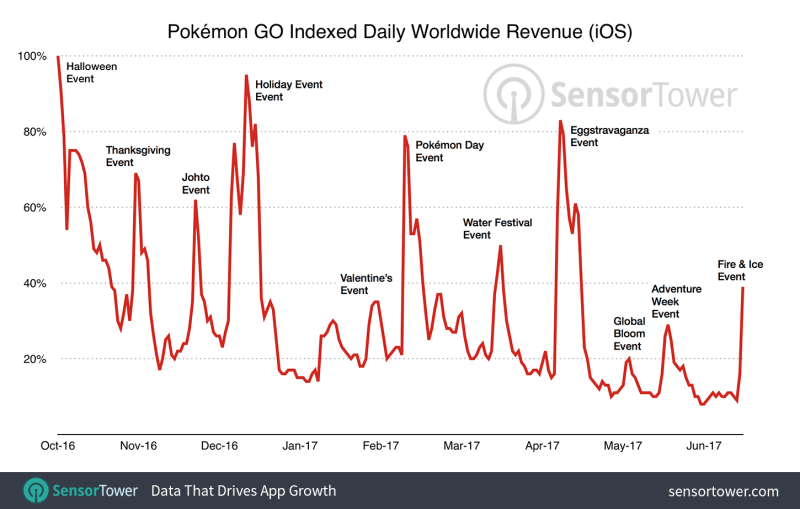 In 2016, Pokémon Go generated about $950 million in revenue, and according to the numbers, the app hasn’t suffered because of seasonal fluctuations such as cold weather or rain. Niantic says that in the month of April this year, it saw over 65 million monthly active users.

“I think the community that’s really passionate about it, they’ll continue playing it no matter what,” Bhargava says. “And now that we’re approaching summer, kids will be on break, people will be traveling, we feel like that’s the perfect opportunity to come up with a big feature like this where people can collaborate together and make new friends and catch all the Pokémon they want.”