Pokémon has never been my jam, as I wrote when I gave it a shot a few years ago, despite enjoying both collecting monsters and exploring role-playing game worlds. But my children love it, devouring the books, TV shows, and games. So once again into the breach I go.

Pokémon: Let’s Go Pikachu and its counterpart, Let’s Go Evee, are the first Pokémon games for the Switch, Nintendo’s hybrid home-portable console that also uses motion controls. It launches Friday, November 16, and it’s proving to be a lightweight-but-enjoyable adaptation of the portable role-playing games.

And, yes, I’m even enjoying the motion controls, and my kids are excited every time we find a new Pokémon, character, or location from the TV shows.

Let’s Go Pikachu/Eevee’s onlines modes weren’t ready as of publication time, so this is a review-in-progress until online works. 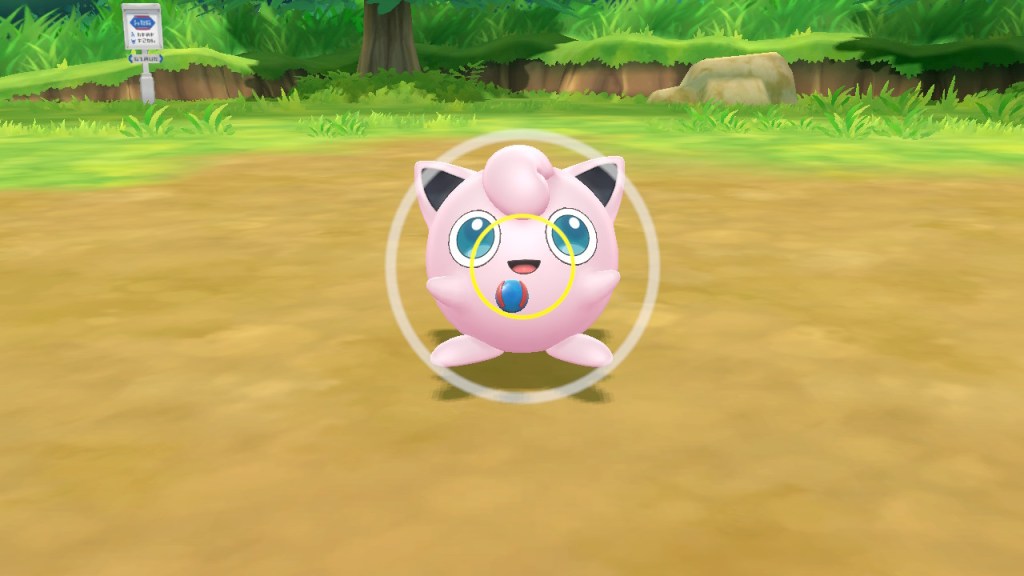 Above: Jigglypuff, you’re mine!

The Let’s Go games showcase another good use of the Switch’s motion controls. You throw Poké Balls with the Joy-Con or a Poké Ball Plus (a ball-shaped controller with one stick and one button). It’s like Skee-Ball, but instead of winning tickets that you turn in for crappy prizes, you capture Pokémon … which can sometimes evolve into stronger critters.

I realize this is a departure from the standard Pokémon RPGs, where you fight the critters you capture. You do fight trainers and gym leaders (and those Team Rocket blackguards!), and I didn’t find this adaptation of the series’ traditional mechanics to be lacking. I got plenty of combat.

In fact, I rather enjoyed “throwing” the Poké Balls. I realize some Nintendo fans have hated motion controls since the Wii made them viable in 2006. They can continue hating. When done right, motion controls can get you off the couch and help make you feel more connected to the game you’re playing, and I feel Game Freak has done just that with the Let’s Go games. The best part is playing co-op with another person — you can make a game out of who captures the Pokémon first, or if one person isn’t so skilled at throwing the balls, the other can do it for you. You can also capture monsters while playing in portable mode with a button press as well, and you can fight together, too. 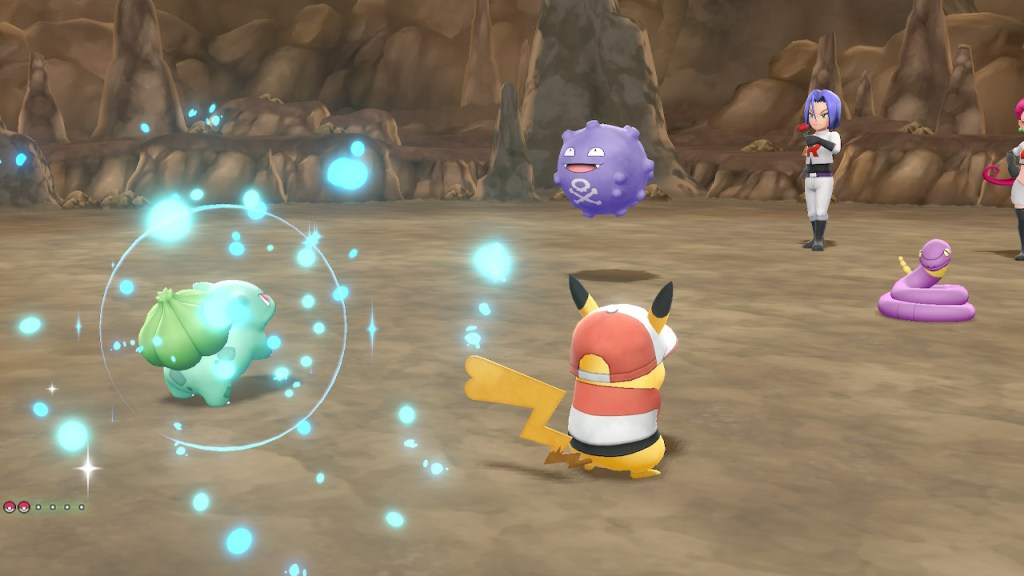 Above: I take our Bulbasaur as my son trains Pikachu in our fight against Team Rocket.

My kids dug this, feeling like they were playing the show. They were better at it than me, too.

Exploring this take on Kanto

Kanto means a great deal to lifelong fans of Pokémon: It was the first region in the series, and they’ve enjoyed many adventures here. I’m a more recent visitor to this place. I don’t know all the cities and areas. I enjoyed traveling through it, seeing what new towns had to offer (like a museum!), exploring caves and tunnels, and finding goodies in nook and crannies through forest trails and hilltop paths.

The best part: my tour guides. As we went from one town to another and met people such as Professor Oak and Brock, my children explained who and what everything was with a great deal of excitement. Now, I realize these pint-sized guides of mine aren’t standard kit for Let’s Go Pikachu/Eevee, but if you’re playing with children that are into Pokémon, you’ll just might get a kick out of exploring Kanto through their eyes, not yours.

And if you’re playing on your own, may your memories of Kanto be your guide.

While I enjoyed playing with my kids on the living room TV, I also got a kick out of playing in portable mode. Folks who love playing Pokémon on Nintendo portables should like it on the Switch as well. I spent most of the past two weekends playing in portable mode while watching football or basketball in the background, and I also played it a few times while in bed.

Pokémon continues to be a natural fit for portables — its bite-sized gameplay enables you to play in short or long spurts. And while it looks good, it’s not a visual masterpiece that demands the bigger screen.

You can also put monsters into your Poké Ball Plus and take them on a stroll, adding them to Pokémon Go. You can receive mystery gifts for doing so, but I found that this wasn’t an essential part of the game. It complements the experience.

Why more than one type of Poké Ball?

I get that you need to buy Poké Balls, but that you need to also use Great and Premeir Poké Balls just feels bad, even if this is a long-lived aspect of the Pokémon series. These are pricier balls for capturing bigger or fancier Pokémon. But when it gets to the point you need to start using these, they feel more like Game Freak is putting a mobile game-like microtransaction into the world. True, they cost in-game money, but the need to spend on these just feels bad when you have three dozen regular balls and can’t use any of them to capture the critters you find.

Maybe my lack of Pokémon game experience is telling here. But I never see these special Poké Balls in the show or card game, and throwing them in here doesn’t work for me. You can spend your money on lots of different items, so I don’t feel like the designers need more reasons to give you things to buy. Maybe it’s just another adaptation of how some moves and attacks work better against certain Pokémon than others, translated into Poké Balls.

Whatever. It still stinks when you come across a Pokémon that requires you to use one of these pricier balls … and your pocket bag is near-overflowing with standard orbs.

I sat staring at this Growlithe, wondering why I hadn’t caught it yet. It was a huge version, which appeared on the map with colorful, swirling rings around them. I had thrown three Great Balls at the critter, and each time, I had landed it within the two rings. I got two “Nices!” and one “Excellent!” but every time, the monster popped out of the ball at the end of the countdown. At this point, I had run out of Great Balls … and patience … and ran away.

Any time this happened, where I had done all the steps required for a successful capture but didn’t catch the Pokémon, I never got any feedback on what I’d done wrong, what I missed. Was there a random number generator rolling critical failures on an under-the-hood d20 in the background? I don’t know. 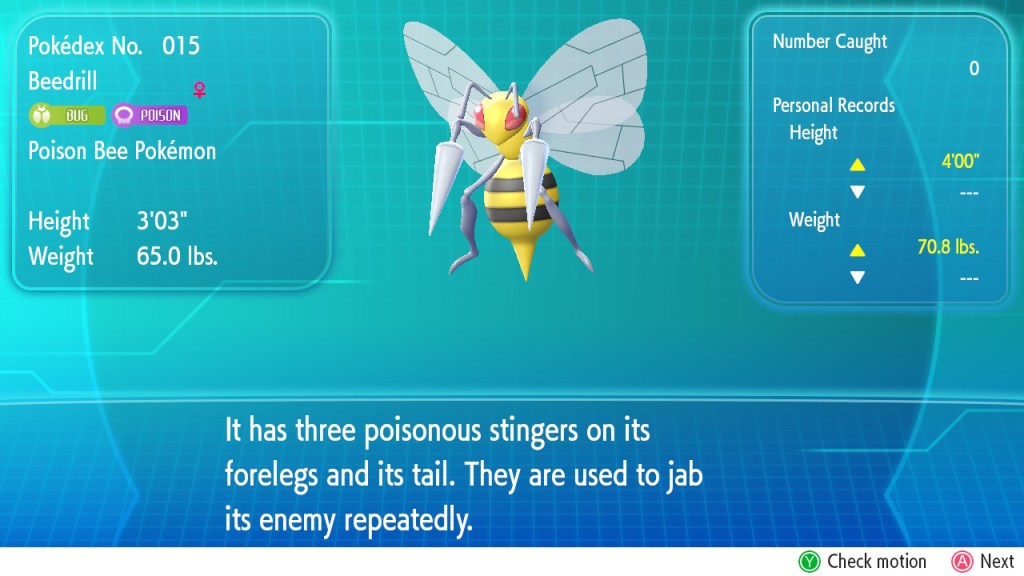 Above: My kids ran around the room when our Kakuna evolved into a Beedrill.

Pokémon: Let’s Go Pikachu is another good example of Nintendo doing what it both excels and fails at: pairing fun gameplay while introducing a new mechanic.

I bet longtime Pokémon fans appreciate, if not embrace, this first Switch outing. It adapts much of what makes the series shine while adding effective motion controls and a bridge to Pokémon Go, the mobile game tens of millions of fans still play. Much of my enjoyment came from taking my kids along on this journey, benefiting from their love and knowledge of Pokémon to enhance what I found here.

I enjoyed Let’s Go Pikachu, and when the first “main” Pokémon game comes to Switch, I can see myself giving it a go.

Pokémon: Let’s Go Pikachu/Eevee comes out November 16 for the Nintendo Switch. Nintendo sent GamesBeat a copy of each version plus a Poké Ball Plus for the purposes of this review.