Pokémon games can be formulaic, which can make it difficult to enjoy them when you’re played a bunch of them over the past 23 years.

Take the gym experience. This is where you solve a puzzle, battle some weaker trainers, and then take on the gym leader in order to win a badge that proves your mastery. The whole ordeal has gotten a bit predictable.

Pokémon Sword and Shield are coming out for Switch on November 15. They represent the eighth generation in the main series of these role-playing games. The franchise has sold over 300 million copies since its debut in 1996, and Sword and Shield will likely be Nintendo’s top sellers for the holidays.

I got to play a 20-minute demo during the Electronic Entertainment Expo (E3) trade show this week in Los Angeles. It takes place in a water-themed gym. At first, it’s a typical Pokémon experience. I walked around, solved a simple puzzle involving switches that turned path-blocking-waterfalls on and off, and fought some trainers.

Things felt much more different once I went to fight the gym leader, Nessa. My character walked into a giant arena full of spectators. It was a far cry from past games, where you’d just walk up to the gym leader and have a simple battle with them. Instead, I watched a cutscene setting up the fight in this giant stadium. It makes the upcoming battle feel more like a major sporting event. It feels special.

Dynamax also helps gym battles stand out. This is a new feature for Sword and Shield. With a button press, you can make a Pokémon grow huge. The effect only lasts for a few turns, but the beast is stronger and has access to more powerful moves while enlarged. 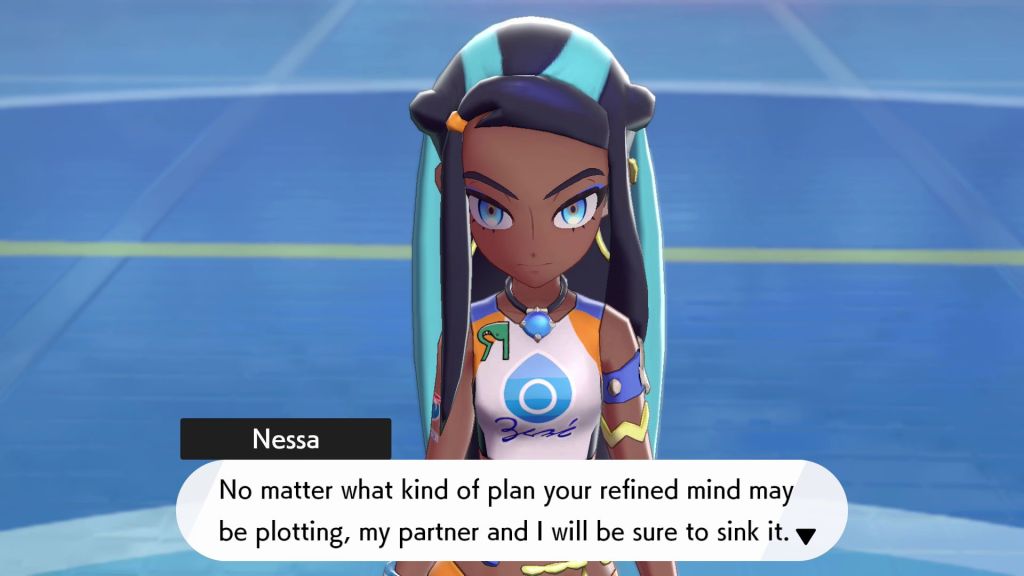 Above: Nessa is a new gym leader.

Nessa also uses Dynamax. Watching her Pokémon get so big that it practically burst out of the stadium made for a fight that felt a good deal more cinematic. I almost felt bad sending out my tiny Pokémon against her monster.

I was worried about Dynamax when I first heard about it. The system sounded like a flash-over-substance technique. But now that I know you can only use the maneuver during special events like gym battles, I feel much better about it. Putting limits on this makes Dynamx feel special.

Sword and Shield mark the first time a main series Pokémon game is on a Nintendo home console (even if the Switch also doubles as a portable). I was hoping this would mean that the presentation and cinematic quality of the series would get a significant upgrade. So far, so good.