Pokémon Sword and Shield are showing that a good game can overcome one’s up-and-down (mostly down) history with a franchise, and that you’re never too old to embrace something your children enjoy.

And embrace Pokémon Shield, I have.

Releasing November 15 in stores, online retailers, and the Nintendo eShop, Pokémon Sword and Shield show that the Game Freak studio and Nintendo have made the right call in finally bringing one of the main games in this long-lived, beloved series to its main console. It’s great on the TV, and it’s fun in the Switch’s handheld mode as well. It makes clever use of the Switch’s motion controls and detachable controller, doesn’t forget the PokéBall still exists, and is bright and colorful, whether on your TV or as in portable mode. It’s fantastic to play with kids, either sharing the controller or having them help you (or you help them) with strategies and the strengths and weaknesses of each critter you encounter.

And turning your cute little Pokémon into giant monsters with crushing abilities is a hoot. As someone who’s also dived deep into Magic: The Gathering in recent months, I appreciate how you can still see Pokémon’s card game counterpart in the video game.

After a little more than 30 hours in my PokéBall, I’ve found Pokémon Shield to not only be a fun game I can enjoy with my children but also as a challenge as I learn the different Pokémon, the best teams to create, and how to use my items to get the most out of my monsters (the Pokémon, not the kids, in case there were any confusion here). 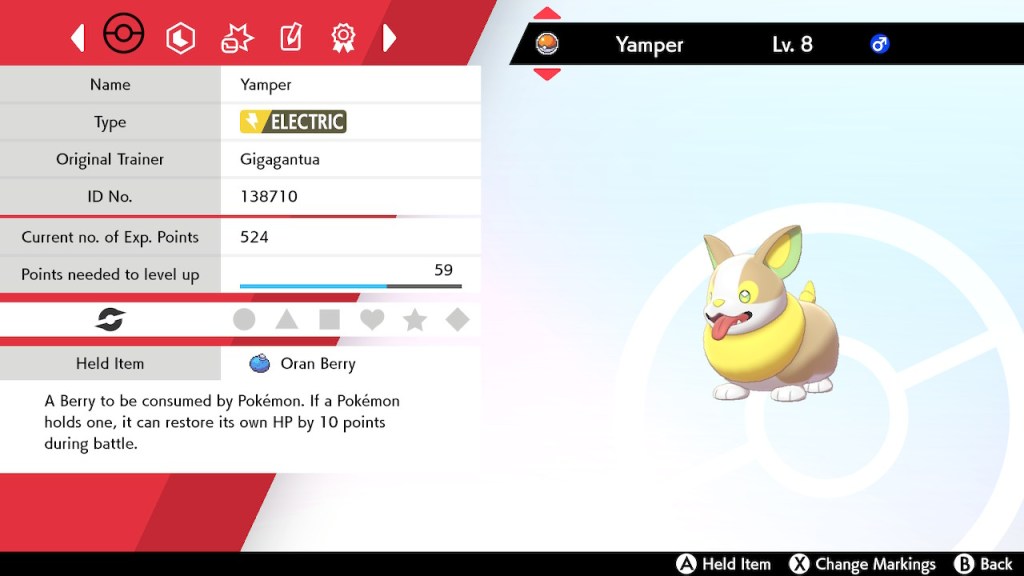 Above: Yamper looks like a corgi with a pug head. He’s a good doggo.

Every mainline Pokémon game that comes out is somebody’s first — let’s remember, the target audience are children. In my case, this is my second main Pokémon game, and the first in which I’ve enjoyed (I like Let’s Go Pikachu as well).

And I find it has a great deal to like. It’s got a familiar play loop that’s similar to most other RPGs — you go explore a new region, fight and catch Pokémon, take on the gym challenges and its leader, and repeat. Along the way, you find cool items that help your critters level up, giving them better stats or new moves. The Pokémon evolve and grow as they gain more experience from battles, asking if you want to give them new abilities.

If Sword and Shield were just about that, I’d still like it. But I was also surprised at how much I enjoyed camping. This is kinda like taking a break while you’re out exploring and battling wild Pokémon. You set up a camp, and you can play with your Pokémon and/or cook for them. Playing with them makes them happier and friendlier toward you, which pays off when you’re in combat. Cooking for them heals them.

Cooking has you mixing main ingredients and berries, which also heal or buff your little friends. And Game Freak makes good use of the Joy-Cons’ motion-sensing capabilities. You fan the flame under your pot to make a variety of curries, and you can either press a button or move the Joy-Con up-and-down as fast as you can. To stir, you either rotate the right stick or you use the controller as a spoon, stirring in the air. This old fart found this fun, either with a traditional controls or by making motions, and my children loved it. My youngest would cackle as while stirring the pot.

You can also ride around on a bike and take part in races. You can take a pair of male and female Pokémon of the same breed to a nursery, and they’ll lay eggs (mine haven’t hatched yet).

And just learning the strengths and weaknesses of Pokémon feels like a bit of a game as well. My kids have a bunch of Pokémon books with lists and lists of the monsters, and as we encountered new beasts, they’d look them up to see their what they’re strong against — and what they were vulnerable to. It’s easy to see how Wizards of the Coast first adapted the video game to the card-game format, and building your team feels just like planning a roster for the tabletop. It also reminds me of putting together a sideboard for a Magic: The Gathering deck.

I found all of this satisfying and enjoyable. Combat only felt like a grind when I was tired, fighting late at night. 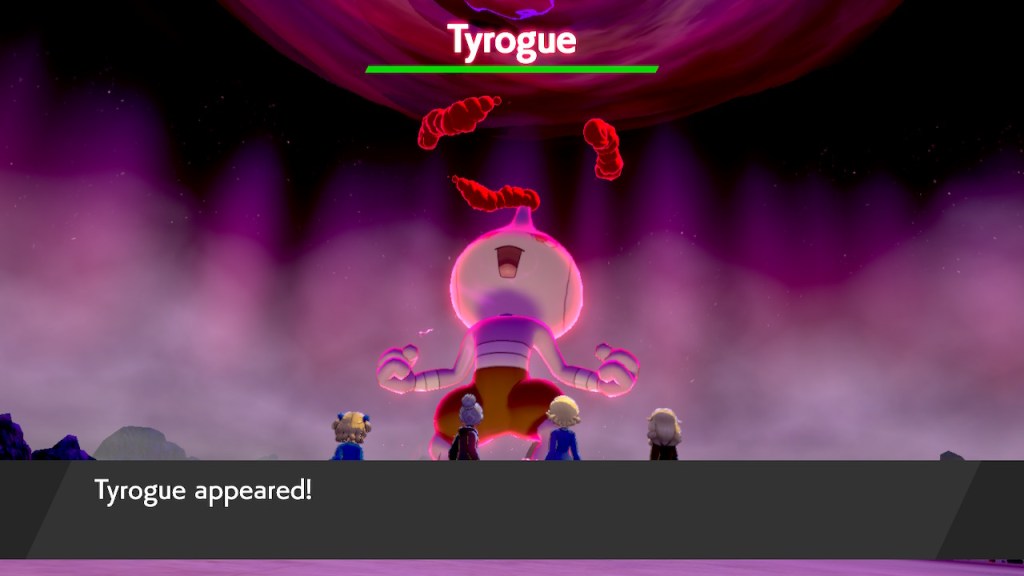 Above: Dynamax Pokémon loom over the battlefield.

The only thing I like better than small, cute monsters are giant, cute monsters. Sword and Shield introduces a new mechanic called Dynamax, in which you use a special energy to make your creatures humongous for three turns. They get powerful, use flashy Max Moves when they fight. It’s cool to see your Scobble use a Max water move to flood the battlefield.

You use these in fights against trainers, but Dynamax is at its best in the Wild Area. Here, a bunch of dens dot the landscape, each glowing pink. A Dynamax Pokémon lives in each, and when you fight them, you’re joined by either some AI-controlled trainers or others online (I couldn’t test it, as the servers were down, but I’m eager to once they’re live). These trainers help you with the fight, and the rewards are fantastic — a lot of candy and other items that help your Pokemon grow and earn new abilities.

And it’s just pretty awesome to see a giant Pokémon loom over you and any allies.

Just because the series has been around for decades doesn’t mean every (relative) newcomer knows how it works. As I went through the Galar region, I’d come to places in which I couldn’t catch some or all of the Pokémon in it, even if I had the proper gym badges to capture critters of that level or lower (in this case, I could catch Pokémon up to level 30, but these level 23 buggers just weren’t cooperating).

I found this to be frustrating. I’d use balls that gave me bonuses to catch specific types of Pokémon, but they still didn’t work. I’m sure, hidden somewhere, the game had some feedback for me on what I could catch and couldn’t catch. But I’d be damned if I could find it.

When some of your Pokémon grow giant after using the Dynamax power on them, they look a little … off. Some of it could be just the angles of the animation model (after all, you’re not used to these things looming over a battlefield). Some of the lines on the fishlike Pokémon look off as well.

I’ve gone online a number of times, trading league cards and trying to take part in Dynamax battles. Trading works well — it takes a little time, but I didn’t have any trouble. I couldn’t find anyone to take part in a Dynamax battle with me, but that could be because I was higher level than other players since I was playing a couple of weeks ahead of release. I expect this to be easier as folks level up. 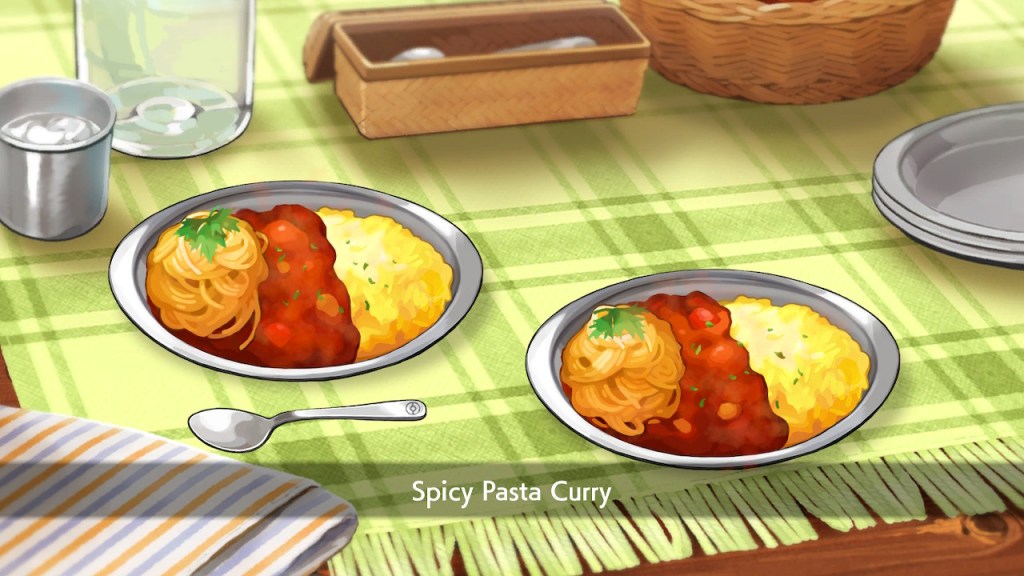 Above: Every time I camped and cooked, I got hungry.

Pokémon Sword and Shield reminds me of how I feel whenever I play a turn-based RPG — like someone is wrapping me in a warm blanket straight out of the dryer, or that satisfied feeling you get from eating a slice of yellow cake fresh out of the oven after slathering butter on top of it.

It’s great, and we love that feeling. But it also isn’t innovative, and while the Dynamax battles are cool, they don’t feel like a major innovation. They’re fun, they’re cool to watch, and they’re satisfying, just like that piece of cake.

Now, I know some fans are upset that it doesn’t have the full PokéDex of past games. I don’t miss it, as I don’t know all of those Pokémon. I’ve encountered the few I love while watching the anime with my kids — that loveable doofus Wobbuffet, the big and burly Diggersby (my boys love it when I bellow “DIGGERSBY” in the low country drawl from the show). And my kids are thrilled with every Pokémon that shows up in the tall grass, a trainer battle, or on the business end of my fishing rod.

That’s because every main Pokémon is somebody’s first. And Sword and Shield do a great job of introducing the world of Pokémon to people while pairing it with everything that makes the series comfortable and warm to most of its longtime fans.

Even if it’s not a spicy, innovative curry.

Pokémon Sword/Shield comes out November 15 for the Nintendo Switch. The publisher provided GamesBeat with a physical copy of both Sword and Shield for the purposes of this review.