I felt bad for Professor Sycamore’s Dragonite. The camera swiveled around the poor creature as dozens of crystal shards suddenly appeared and struck its chest, sucking the last of the Pokémon’s hit points away. It was clearly no match for my Mega Mewtwo and its powerful Psystrike.

Fluid battles, a dynamic camera, and fully animated attacks are all a part of Pokémon X and Y, the newest entries in the monster-capturing series (releasing worldwide for the 3DS on Oct. 12). Last week, I played a brief demo that Nintendo specifically designed for attendees at the first Pokémon Game Show (a two-day celebration of all things Pokémon) held this past weekend in Tokyo. But it came with an important caveat: The areas and events in the demo were not representative of the final product. It was more like a sampler platter of some of Pokémon X and Y’s major features packed into a small garden-like area.

While those waiting in line in Japan only had 10 minutes to play, I spent close to an hour squeezing everything I could out of it, like capturing new Pokémon, talking to new characters, and seeing the flashy Mega Evolutions in action. And for the first time in almost a decade — I haven’t played any of the others since Pokémon Gold and Silver — I’m excited for a Pokémon game again.

One step closer to the show

Each new generation of the handheld games has slowly refined or added new features. But one thing has always bothered me about them: They were never as exciting to watch as the Pokémon cartoon or the movies. Your imagination had to make up for the stiff 2D portraits and sparse animation.

Pokémon X and Y changes all that with its upgraded 3D graphics. The Pokémon look and act like living, breathing creatures when you and your opponent summon them into battle. The camera follows the action from different angles: rotating around the combatants, zooming in for close-ups, or pulling back when an especially spectacular attack is occurring. The most impressive-looking attacks aside from Mewtwo’s Psystrike were the Flame Charge (conjures a swirling vortex of fire),  Psybeam (blasts a concentrated cone of energy rings), and Electro Ball (shocks opponents with a bright yellow sphere of electricity). Even the normal moves, like Double Slap or Tail Whip, have some oomph to them.

The demo also showed off the Mega Evolutions, which is an extra tier beyond a Pokémon’s normal evolutionary tree triggered by Mega Stones (each one being specific to that Pokémon). Unlike the permanent evolutions, Mega Evolutions only last for the duration of a battle. For this version, Professor Sycamore gave me a Mewtwo to demonstrate how the process works. In the real game, you can toggle Mega Evolutions on or off, but here it happened automatically once you selected an attack.

It was difficult to tell just how the Mega Stone affected Mewtwo beyond its new appearance — it didn’t add any new moves to its repertoire, for example — but Mega Mewtwo definitely felt stronger. Professor Sycamore’s Pokémon didn’t put up much of a challenge after that. 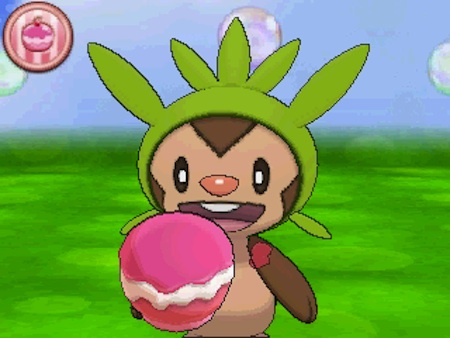 Above: Pokémon-Amie lets you pet and feed your Pokémon.

Pokémon-Amie adds another layer of believability for your Pokémon. On the touch screen, you can pet, feed, and make faces at them using the 3DS’s cameras (at one point it told me to make a  “kissy face”) to keep them happy. Doing these activities increased three different status bars: Affection, Fullness, and Enjoyment. Nintendo representatives weren’t ready to explain in detail how these stats benefits the Pokémon, but they did mention that it could increase your Pokémon’s chances for a critical hit in battle.

You can even make the Pokémon angry. For a long time, I couldn’t figure out why my Fennekin kept growling at me while I was feeding it … until I realized that you had to hold the food near its mouth and not be an asshole and drop it on the ground like I kept doing. I fared better with my Pikachu, who, like in the show, is just too darn cute. It asked me questions (“Pika?”), swayed back and forth as it waited for a treat, and scratched itself if it was itchy. And if I petted Pikachu too close to its rosy cheeks, it electrocuted me.

While some of Pokémon-Amie’s features were not in the demo — a “decorate” option wasn’t working — I thought it was an amusing way to interact with your Pokémon outside of the battle-and-evolve grind that the series has become known for.

I have no idea how Pokémon X and Y will turn out. The narrow scope of the demo excluded so much that it’s hard to tell. But what I did play was enough to convince me that I should at least give them a try, if only because my 10-year old self would’ve loved to play something like this back in 1998, when Pokémon Red and Blue first arrived in the U.S.