Pokémon X and Y is kind of a big deal. Releasing worldwide on Oct. 12 for the Nintendo 3DS, these two games will mark the first time entries in the main Pokémon series have been fully rendered in 3D. Spin-offs have been 3D since all the way back to the Nintendo 64, but never have the traditional handheld iterations that made the franchise so insanely popular to begin with. Until now, and after 20 games, it makes a world of difference.

So, what took so damn long?

Traveling from Tokyo, graphic designer Hironobu Yoshida and game director Junichi Masuda of developer Game Freak, Inc. met up with GamesBeat at Nintendo’s Redwood City office in Northern California. Over the years, Yoshida has designed too many Pokémon to count (from over 650 total now) in addition to the franchise’s iconic user interface.

After playing the game for an hour, we were ready to grill the duo on the new features and visuals, but we also wanted to get their thoughts on the potential for a Pokémon massively multiplayer online game, a sequel to the beloved Pokéman Snap, and if the team would ever explore darker, more mature themes akin to something you might expect from modern role-playing games. 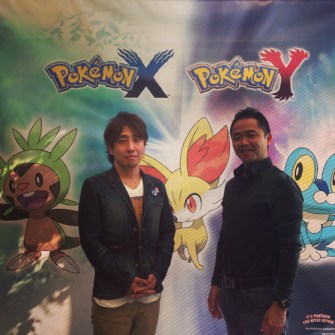 GamesBeat: This will mark the sixth generation of main Pokémon games, beginning with the original Game Boy in 1996. While spin-offs have featured 3D graphics, the traditional-style Pokémon game has always been 2D until X and Y. Why did it take so long to get to this point?

Junichi Masuda: The kind of expression that we wanted to achieve at Game Freak with the 3D models was to really make it look like the official 2D artwork we put out, that our art director Ken Sugimori designs. It has this softer, warmer feel to it. We felt that this is the first time that the hardware was really able to accommodate that expression that we wanted to achieve.

GamesBeat: With nearly 700 Pokémon, does it get hard to come up with new types without straying too far from what originally got people into Pokémon? Or is straying from where you’ve been before kind of what the team is interested in now, in an attempt to vary that up?

Hironobu Yoshida: As designers, at Game Freak we’re always trying to challenge ourselves with new things. But when we’re designing the Pokémon, we’re always trying to find a balance between making things that are very different from the existing Pokémon — but also keeping certain aspects that make them look like a Pokémon.

GamesBeat: Mewtwo was one of the first notable humanoid Pokémon, but since then there’s actually been quite a few. Is the reaction to them from the fans any different than some of the more cute and cuddly Pokémon? Do people like them, or do some people get weirded out by controlling something that resembles a human more than a pet?

Yoshida: I don’t really feel like there’s a specifically different reaction to those more humanoid Pokémon than the other Pokémon, from our fans. But one thing we’re always more careful about making those more humanoid designs is to make them not appear to be human. We go out of our way to attach certain parts to them or change certain things about them to make them look not human.

GamesBeat: The gameplay in each of these main releases is pretty similar. You follow a familiar path in collecting Pokémon and beating trainers and things like that. Is there anything new or special about the story that the team is trying to tell each time?

Masuda: When it comes to the core gameplay of the Pokémon games – going into the tall grass, finding Pokémon, catching them, raising them, training them – it’s very important that we keep it consistent. We look at it like a sport. Having consistent rules is very important. Or kind of like fishing, where it’s always the same. You’re always doing the same thing when you’re fishing. However, changing the surrounding elements every time is something that we focus on quite a bit – like the story, for example, having a different setting every time.

This time, with the 3D graphics, we have a very different visual presentation style. We’re able to manipulate the camera angles to show off different things in a way we couldn’t before. When it comes to changing the core gameplay, that’s not something we’re going to do. If someone wants to go play basketball, they don’t want to wind up playing a different game with different rules.

GamesBeat: Following off that, Pokémon’s been around for nearly two decades. Many of its original fans have since grown up. They’ve matured since they became fans of Pokémon. Could the team ever see Pokémon’s stories going in a more mature direction?

Masuda: We tried to do that a little bit with Pokémon Black and White, telling a story that, while it appealed to kids, would also be something that adults could enjoy more than previous titles, dealing with some more in-depth themes. With X and Y, we’re also hoping to have some of those more in-depth themes as well. But at the same time, we’re trying to create – with Pokémon X and Y in particular – this warm and kind atmosphere in the games. That’s one thing we’re trying to get across.

We’re trying to increase the depth and appeal to adults more in the gameplay this time. For example, in the battles, we’re introducing Mega Evolution and hoping the strategic elements will be even more fleshed out than before.