King’s Candy Crush Saga has ruled the “match-3” game category on mobile for several years now. But that title once belonged to match-3 pioneer PopCap Games and its Bejeweled title. Now, Electronic Arts’ PopCap Games division is shooting for a comeback with Bejeweled Stars. 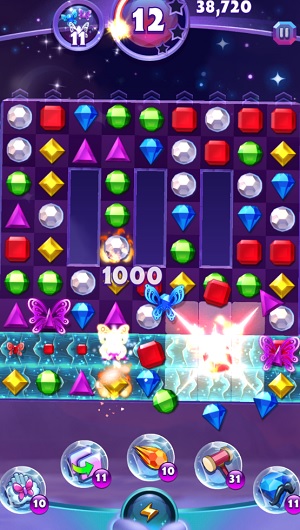 Above: Bejeweled Stars in action

EA is announcing the return of the Bejeweled franchise today, with the full reimagined game launching as a free-to-play download on the Apple iTunes App Store and Google Play. The title is an important one as Bejeweled kicked off the market for casual games when it debuted in 2001. This audience was more heavily female, and it wasn’t the same sort of player who played hardcore video games. Rather, Bejeweled opened the path for a huge market among non-gamers and paved the game for countless clones.

EA previously launched Bejeweled 3 on the PC in 2011 and Bejeweled Blitz on Facebook and mobile starting in 2009.

“We created the match-3 phenomenon with that game and we have been thinking a lot about how we evolve the brand since then,” said Heather Hazen, game general manager for Bejeweled Stars, in an interview with GamesBeat. “Back in the days of Facebook, it was a different level of audience with more than a million daily active players.”

She said, “At the time, we didn’t have a plan for taking it to mobile. We then moved Bejewled Blitz onto mobile on iOS and Android. We thought about it like ‘Spider-Man.’ With great power comes great responsibility.”

EA prototyped six or seven versions of the game before locking in on the current design. EA shifted onto the Unity game engine.

“The amazing thing about Unity is how fast you can prototype,” Hazen said. “We went back to our roots in what PopCap does well. We thought about mechanics that feel really great and turn it into something a Bejeweled audience would understand.”

In the new 2D puzzle game, you’ll match three gems and trigger all sorts of action, from explosions to challenges. The game has new characters — Felis, StarCat, Corvus, and the StormCrow — who serve as guides for the player. You can collect “SkyGems” and use them to create power-ups, dubbed Powers, like the Scrambler, Flame Swapper, and Flutter Gust. The game has more crafting than it used to.

Bejeweled Stars will have new challenges with names such as Currents, Clouds, and Glaciers. You have to earn stars to light up the night sky and complete constellations to unlock special powers. And you have to open special chests to unlock charms and Bejeweled emojis. You can use charms to send personal messages to friends.

“We had to make sure the visuals felt right,” Hazen said. “Stars and match-3 really mean something.”

Thanks to mobile games such as Bejeweled, EA has more than 300 million registered players around the world and revenue of $4.5 billion. The core game mechanics are the same, but the types of gems you collect and use are different.

The game has 205 main progression levels, and more than 100 daily challenge levels. EA is still making more of them. “We want every level to feel like you win, and that’s a positive experience,” Hazen said. “The sense of accomplishment you get when you finally win is really powerful.”