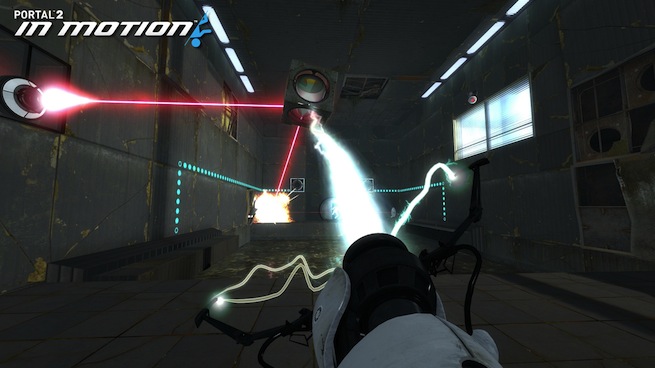 Valve Software’s brain-loosening puzzle-platformer Portal 2 came out aaaaaall the way back in April of 2011, but the developer has continued to support it through add-ons like free downloadable content (DLC) and a level editor for the PC version. This month, PlayStation 3 owners who sprang (or fell, depending on how you feel about it) for a Move motion controller received their special Valve time with the release of the platform-exclusive DLC, Portal 2 In Motion.

Developer Sixense, which also programmed the motion controls for the main game (available as a free update) created 13 additional test chambers which add a few new ways to play with the familiar “go in here, come out there” setup.

Cool new mechanics… After you pick up an item, you can hold out your Move to activate One-to-One, which you can use to rotate objects in real time (hence “one-to-one”) by turning your controller. You can also get boxes across gaps, through holes in walls, and around obstacles. It has a bit of a learning curve, but it makes sense and feels natural once you’ve done it a few times.

Portal Surfing lets you grab a portal you’ve already placed and drag it along a wall or rotate it. I didn’t see its value at first, but then I learned that the game knows which side of the hole is “down,” which means that you can reorient portals to do things like launch Repulsion Gel across a room by turning the portal upside down or accessing a hard-to reach spot by turning the portal sideways and sliding it into a narrow space that you wouldn’t normally be able to fire at. On a more basic and functional level, though, Portal Surfing is a quick and easy way to fix those times when your placement is just a little bit off.

Scaling allows you to resize a crate to hit two buttons simultaneously or make a giant, heavy box to break through a glass floor. It’s also a really cruel way to destroy a turret. Scaling also presents some interesting new possibilities for puzzles; in one room, I had one box that I had to use to hit three switches. The solution involves stretching the square crate into a rectangle and extending it through different portals. It required the kind of weirdo lateral thinking that we’ve come to expect from Portal games, and the “A-ha” moment when I figured it out was as satisfying as any in the main game.

Of the three additions to your scientific arsenal, One-to-One is by far the most ingenious addition for its sheer simplicity and the options it opens up. Adding that third dimension to item handling could have created a depth-perception nightmare, but Sixense deftly avoids that by adding little lights to switches; the lights turn on when a box is over the button. And setting turrets on fire using a laser beam and a reflective cube is extremely satisfying and fun.

…and they work.
That is the important question, right? Do the motion controls work in the motion-control-centric DLC? Well, they do. And extremely well.

I’ve been slow to see the appeal in waggling, especially after the time someone saw me using my Wii Remote as a pretend saw in Capcom’s Zack and Wiki without seeing the onscreen log I was miming at sawing in half. It was the sort of Naked Lunch moment that made me question the value of the whole concept. Is pretending to saw a log in half by wanking a white plastic remote control really better than doing the same thing but with buttons? I decided it isn’t, and it doubly isn’t if anyone catches you doing it.

Having said that, I’ve developed a respect for gesture-based gameplay done well, with one caveat: For me, as soon as the game asks me to move my controller toward the screen, it’s over. This is the one input I have never gotten to work right on the Wii, whether I’ve been attempting a forward sword thrust in Skyward Sword or trying to guide an endoscopic tube down a patient’s throat without bumping into anything important in developer Atlus’ medical-drama simulator Trauma Team. It just doesn’t work for me.

One-to-one, arguably the key mechanic in all of In Motion, involves moving the controller toward the screen, and guess what? It works perfectly. Likewise with Scaling and Portal Surfing: I never had any issues getting the game to understand what I was trying to do, with one very specific exception that I’ll get into in the next section.

Puzzle solutions are occasionally inelegant
In Motion contains moments at which progressing depends on forces out of the player’s control, and that’s kind of a big deal.

I admire the Valve-designed puzzles in both Portal games for their almost mathematical precision. The actions and inputs that get you from one of the facility’s ubiquitous inter-chamber elevators to the next typically follow a clean, logical sequence that is always satisfying to discover. Sixense’s solutions largely fit in with Valve’s, but one test required me to drag a portal along with me as I walked, which is fine in theory but sadly messy in execution. It was a little difficult to keep myself in the right position relative to my cargo. I had less trouble with this during my second playthrough, but it still felt a bit sloppy, like I was exploiting a shortcut … except that I was doing exactly what Sixense wanted me to do.

In another level, you use portals to paint some walls with Repulsion Gel (which makes you bounce when you touch it) and cover a floor with Propulsion Gel (which makes you run faster). But in the course of painting the walls, I got some bouncy gel where the speedy gel should have been, and when I tried to put more speedy gel on top of it, I accidentally got some of that where I needed the bouncy gel. It all felt a little “I Love Lucy,” which is unfortunate considering the clever precision of some of the other puzzles.

The final test chamber drops a cube you need within firing range of a group of turrets. You can’t drop portals to bring it over to where you are; you have to run out there, take a few hits, and risk death before you’ve done anything else. It’s a weird design decision, and I have no idea why Sixense made it. The “solution” requires you to drag the resized box around as a shield, which works about as well as dragging that portal around did earlier. Success felt more up to chance than any skill on my part, and getting past these parts wasn’t nearly as satisfying as unraveling the more logic-driven rooms.

It’s entirely plot-free
In Motion plays like an extended tech demo, albeit a pretty good one with the highest of production values. Its $9.99 price tag gets you a few hours’ worth of puzzles, which is probably enough value for your money, but the expansion is also devoid of any plot or context. That’s not necessarily a bad thing, except that it’s DLC for a series known for its story and clever writing.

Each of the two main groups of puzzles — “Basic Skills” and “More Challenges” — start and end the same way. At the beginning, series hero Chell gets off of one of those accursed elevators. At the end, she gets onto a different one, and then the credits roll. The add-on gives no indication of when its events are happening or why, which is fine, but it’s also a giant missed opportunity.

To be fair, I don’t expect full voice acting and cutscenes, but a little context would have been nice. As they stand, these puzzles take place in a vacuum, and it’s a bit jarring. This isn’t the biggest strike against In Motion, but superfans hoping for more of Portal’s trademark wit or a clever in-universe explanation for these new mechanics will get neither.

Portal 2 In Motion offers some cool new tools and a few more hours playing around in the Aperture Science Test Facility. While it’s occasionally sloppy and too isolated to hold its own against Valve’s best, it does have solid motion controls and a lot of neat ideas that I would love to see more of in the future.

Portal 2 In Motion was released November 6, 2012 for the PlayStation 3. The developer provided GamesBeat with download codes for both Portal 2 and the DLC for the purpose of this review.