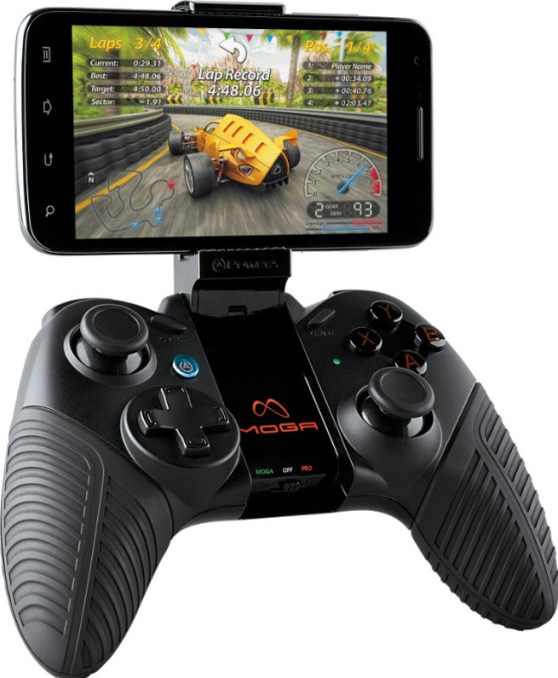 PowerA made its appearance at the Consumer Electronics Show to prove that even I can hit targets with its new Moga Pro game controller for mobile devices.

The device is one of many that will enable you to enjoy free-to-play Android games with a traditional console-style controller, rather than the touchscreen on your smartphone or tablet. Thus, it is one of the many new devices that will aid smartphones and tablets in their attempt to dethrone dedicated game consoles and portable game controllers. Controllers were once simple devices, but now they are pawns in the larger war among Google, Apple, and the traditional console makers Microsoft, Nintendo, and Sony.

The Woodinville, Wash.-based company launched its Moga controller for mobile-gaming devices last fall in 7,000 stores at a price of $50. Now, it has come up with a controller that resembles a traditional gamepad. We got a hands-on demo with JJ Richards, divisional vice president at PowerA.

“I’m having a console experience wherever I go,” said Richards, as he played the Android zombie-shooting title Dead Trigger.

The original Moga was smaller than a typical console controller and featured a much different look because PowerA designed it for pocket portability. But the new controller looks just like one for an Xbox 360 system. The original version had compromises, such as no shoulder buttons, no D-pad, and low-profile sticks. It worked with AA batteries.

“The next generation has no compromises,” Richards said. “It gives you comfort and familiarity, making it feel like a console.”

With a Moga Pro, you can play a mobile release on an Android device using a Bluetooth connection to the smartphone or tablet. The Moga Pro has full-sized console-style grips, precision dual analog sticks, four action buttons, a directional pad, two shoulder buttons, two shoulder triggers, and a tablet stand. You can size the phone stand (attached to the middle of the controller) or the tablet stand to fit any screen. If you play with a tablet, you definitely want to put it on a stand.

Moga Pro will be available in the spring. Pricing details are forthcoming. Gameloft, Rockstar, SkyVu Entertainment, Madfinger Games, Namco Bandai, Sega, Arb Studios, Vector Unit, and others have developed titles that make use of the first Moga controller. The Moga system supports Android 2.3 and higher. It has an HDMI port that allows you to display games on a TV.

Moga Pro will compete with Nvidia’s Project Shield, which combines a traditional controller with a 5-inch touchscreen portable gaming device. But Richards said, “It’s not like there will only be one device or one way of doing things. More energy for this space is cool.” Other rivals include the GameSmart devices coming from Mad Catz Interactive.

Check out the Moga Pro video below.