Activision is reportedly spending $500 million on Destiny — and the giant publisher could be making a profit on it by the end of the year.

The sci-fi online shooter could be the biggest video game of the year when it launches in September, based on an analysis of cumulative video game preoders by Cowen Research analyst Doug Creutz. Destiny online shooter game could sell 10 million to 15 million copies, or roughly $600 million to $900 million at retail, which would give it a chance to be the top-selling game of the year.

The analysis is based on Cowen’s Ordometer, which tracks U.S. video game orders before launch and then correlates the result to sales after launch. The analysis is backed by six years of Amazon bestseller data and NPD’s reported physical sales of games. Cowen measures the data every week from the Electronic Entertainment Expo to the end of the year for both Xbox and PlayStation consoles. The results paint an estimate of preorders and are a bit surprising given our own lackluster impressions of Destiny’s recent alpha test.

Creutz said in his report that Destiny has the highest Ordometer score of any game tracked over the past four years, and it could even outsell Call of Duty: Advanced Warfare, which Activision plans to launch in November. Call of Duty is tracking in-line with Call of Duty: Black Ops 2, which had a slow preorder start in 2012 but went on to be the highest-selling game in the series’ history. So the “overall trajectory of Advanced Warfare remains up for debate,” Creutz wrote. The fate of Advanced Warfare will be determined in the next few weeks of preorders.

Meanwhile, Creutz said the analysis showed that Electronic Arts’ Battlefield Hardline is unlikely to sell well. That means Creutz favors Activision as a stock over EA at the moment. He said the Ordometer score for EA’s cops-and-robbers version of its shooter franchise is just a fraction of where Battlefield 3 and Battlefield 4 were in 2011 and 2013, respectively. It is roughly in line with Medal of Honor: Warfighter, a disappointing title from 2012.

Meanwhile, the score for EA’s Dragon Age: Inquisition looks more promising. At the same time, he said preorders are that game are “well but not wildly well.” He estimates the game could sell 3 million to 4 million copies worldwide.

The next-generation console version of Grand Theft Auto V, coming this fall from Take-Two Interactive’s Rockstar Games, should boost the demand for the first-person shooter category. GTA V has become one of the best-selling games of all time, with more than 33 million copies sold on last-generation consoles. GTA V could also offset expected “soft sales” for Take-Two’s Evolve and Borderlands: The Presequel. Creutz thinks those will fall victim to this year’s “shooter glut.”

Cowen believes that GTA V preorders have slowed after E3, with next-generation sales of single-digit millions versus the 8 million to 10 million that seemed possible just after E3. Lastly, Creutz said Ubisoft is in a strong position with Assassin’s Creed: Unity pacing ahead of franchise pre-orders for the last three years, and Far Cry 4 also seeing strong advance interest. However, he said Ubisoft’s The Crew appears likely to be “dead on arrival.” 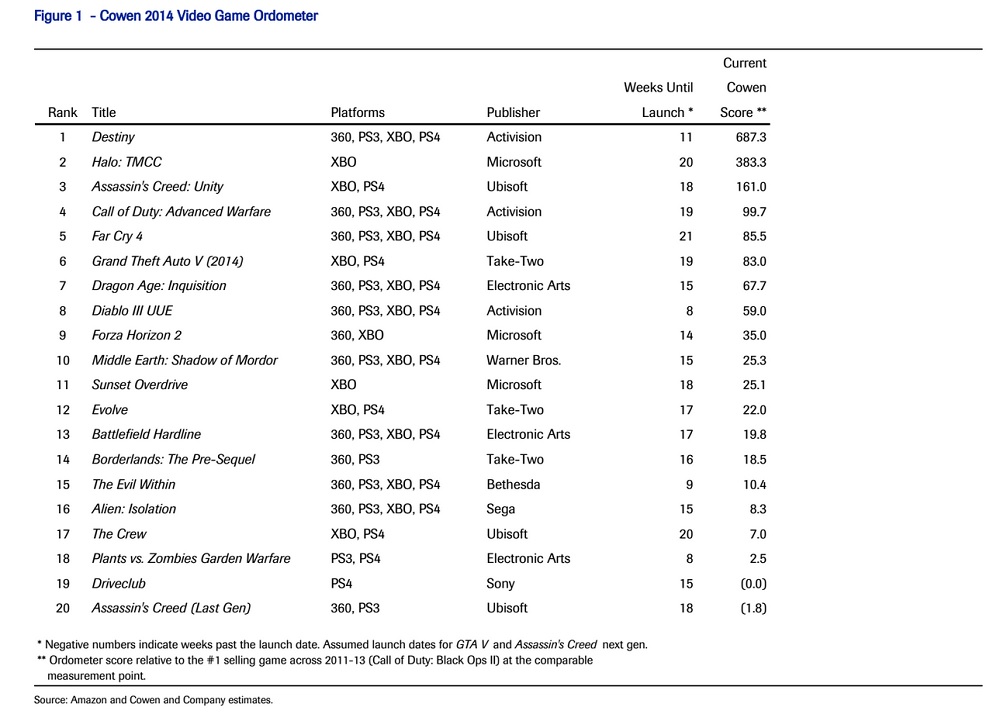