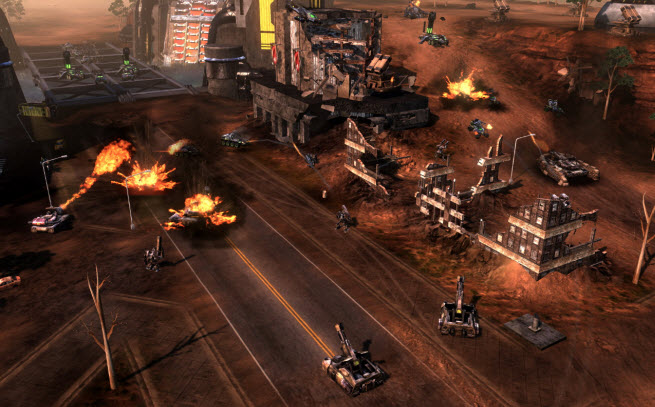 Trion Worlds raised $85 million in January to finance its massively multiplayer online gaming empire. And one of the company’s resulting titles is End of Nations, a massively persistent real-time strategy game that lets 56 players battle on the same map at once. 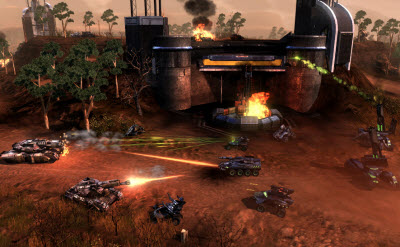 Redwood City, Calif-based Trion recently previewed the End of Nations game, which is being built by Las Vegas-based Petroglyph Studios. I got to try it out again (I played a pretty polished game last May) in a four-versus-four multiplayer session.

The title seems to be taking forever to get out the door, but it’s getting closer to completion and should be available in open beta testing later this fall. Trion has plenty of money to be meticulous and is spending a lot of money now to ensure a smooth launch. It will launch the title as a free-to-play online game, where users play for free and pay real money for virtual goods. Once again, this game is one of the biggest bets in the making.

This is Trion’s second major title behind the fantasy MMO Rift, which debuted last year and grew to more than a million subscribers in its first four months.

“It’s all part of the larger vision on the deep end of games,” David Luehmann, vice president of third-party development at Trion, told VentureBeat. 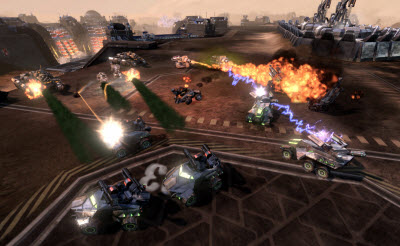 This title is a sci-fi oriented battlefest, set in a future where two factions challenge the ruling Order of Nations in a world war. Last year, Trion showed off battles against non-player characters, but this time it was player-versus-player action. The game is in alpha testing now. An open battle will follow in the summer and the full launch will come this fall.

In my preview, I was able to play the Shadow Revolution faction, which includes dissenters who want to see the Order fall but aren’t so friendly with the rival Liberation Front. The campaign has a full-fledged storyline that depicts the world war between the factions. What you do on a daily basis will affect the larger strategic map.

This real-time strategy game for the PC lets you craft your own companies, which consist of 10 units with tanks, infantry, artillery, and air support. In the scenarios we played, you get about 1,000 points to spend on your company. You can weight it toward any kind of unit. And if it isn’t working for you, you can swap it out for another kind of company. In our scenarios, we played with just one company each. But players will be able to fight with multiple companies under their control. 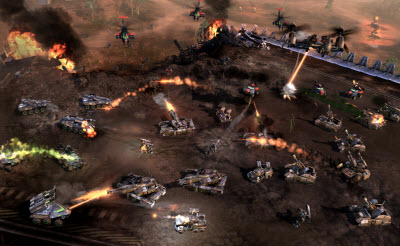 You get a bird’s-eye view of the battle, but you only see a small portion of the massive maps. A smaller radar map on the command interface tells you where the action is, and you can quickly move your units. The play is fast and fluid. I noticed no delays in the three battles I fought.

The graphics of the game are extremely pretty, as you can see from the images, and highly detailed. Battles on the large-scale have never been done before with real-time strategy games, but Trion has invested heavily in the server infrastructure to support the game. As more players come online, Trion will add more computing power to handle them.

The dashboard gives you lots of options for command. You have special weapons such as giant bombs that can wipe out a cluster of enemies in one fell swoop. But you have to wait for them to recharge. You can also use special powers to get a view of the enemy’s rear area in case you want to launch an attack from a new direction.

The first match we played was Last Man Standing, a single-player battle where we had to defend a base as long as possible. It was a simple scenario aimed at teaching me how to play. I had to control various checkpoints to improve my resource collection and prevent the enemy from taking my home base. Order of Nations came at me from all directions, and I couldn’t defend my base long enough to seek out the enemy. I got used to paying attention to the tactical map and managing my unit respawns. If you click on a unit on the toolbar and you have enough resources, the unit will respawn. Unfortunately, I found this fact hard to remember, and I desperately clicked on icons to respawn units, even when I didn’t have enough resources. 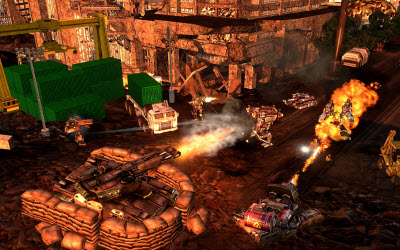 In the second match, we fought to control a farming region. I was able to play against human players. We were able to choose between various pre-set companies, which shortened the time it took to get into a real battle. While I was only in charge of 10 units, I found that I would inevitably forget about some of them as they got scattered and killed and respawned.

I had air units and discovered that, while they can clear the way for you, the infantry and tanks have to actually take a victory point. Our side had more tech and stealth units, but we didn’t have enough firepower to take out the Liberation Front’s bigger tanks, which resembled the U.S. Army of the future. The result was another loss.

In the third match, we fought as a team of four human players against four rival testers. In the four-on-four match, it became immediately obvious that whatever you do as an individual commander has an outcome on the larger battle. If you have a weak link, or if you don’t communicate, an organized enemy can destroy you. That’s what happened with my team. We started out by taking key objectives for resource control and victory point locations. But we were attacked by an enemy that moved four companies in tandem against our scattered units. My entire company was wiped out multiple times. I respawned units piecemeal and sent them to die. 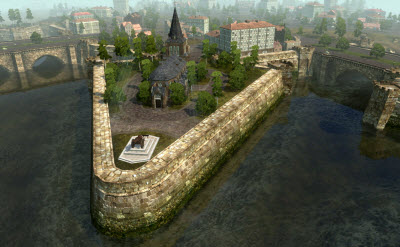 The Trion folks say they will have more than 500 units battling it out on a single map. The campaign mode will be huge as the factions fight for control of key territories across the globe. As you become more experienced, you can climb the ladder as a commander.

You will be able to do battle with a wide variety of units, such as Hero units, and climb a technology tree to get better and better units. Players will be able to spend money in the game, but they won’t be able to buy victory. Over time, a non-paying player can progress without spending money.

I’m pretty confident that this game will be fun to play when it comes out. It will have huge epic conflicts, and chaos will rule on the battlefield. But I felt like I needed a better tutorial — one is certainly coming later — to teach me how to master the complexities of the game.

If you like a lack of control on the battlefield, that’s fine. You’ll have plenty of that in End of Nations. But my main strategy will be to latch onto a player who knows what they’re doing and to learn as much as possible from them as I can.

We interviewed David Luehmann, vice president of third-party development at Trion Worlds, about the game at a recent preview event. Here’s the video interview: