If a game isn’t broken, don’t try and fix it. In fact, make the rest of your games follow that same formula.

That’s a strategy that Bethesda Softworks now appears to be applying to the rest of its franchises. The company is changing the direction of its Prey series, which was originally more like a corridor-based first-person shooter (FPS) game that sent players from point A to point B, to be more like its open world games like Oblivion and Fallout 3.

Bethesda Softworks showed off a new demo for Prey 2, the latest game in its Prey series that features players traversing an alien world, at the Electronic Entertainment Expo today in Los Angeles, Calif. It looks like it’s the whole universe and vision of Prey with a dash of Fallout and a few extra slivers of Oblivion baked into the package.

Prey 2 tells the story of Killian Samuels, a U.S. Marshall who was abducted by aliens when his plane got sucked into a vortex that landed him on an alien planet. He was captured by slavers and lost parts of his memory but was able to escape. The player joins Samuels when he has begun making a name for himself as a bounty hunter in the slum alien cities, using the skills he learned as a U.S. Marshall to effectively take down marks.

The game begins with Samuels waking up among the wreckage of his plane on an alien garbage area. The rest of the survivors are dead, so he breaks out his pistol and starts to move toward higher ground. He’s immediately ambushed by alien slavers and has to take cover and start chipping away at the bad guys. It’s a FPS that lets players see the game through Samuels’ eyes and hide from enemy fire with cover.

The game also has a few elements of Mirror’s Edge in that the player can execute some pretty sweet parkour-like moves. Players can vault over pieces of cover, climb up their surroundings and execute an action slide under obstacles and into enemies. They can also shoot enemies while doing any of those parkour-like actions. For example, the player can hang from a ledge and use the vertical building as a piece of cover when they peek over the ledge and open fire with a pistol.

It’s an open-world game like Oblivion or Fallout and takes place on the planet Exodus. That planet always has one side facing the sun and one side in the dark, with the largest city on the border between those two parts. That’s where the game takes place, and it features an “alien noir” art style that harks back to the old detective movies that focus on the gritty parts of cities like Los Angeles, Calif.

Since he’s trapped on an alien world, Samuels has access to a lot of cool alien gadgets that help him as a bounty hunter. He can activate a scanner that automatically turns non-playable characters a certain color — green if they’re harmless, red if they’re hostile and yellow if they might turn around and try to kill you. Enemies that the player is trying to track down and kill or capture are highlighted white and some additional details pop up — such as the reward for the quest or what the mark’s name is.

The whole game is a quest to help Samuels piece together his memory and try to find a way back to Earth. It’s carried out through a series of bounty quests that make Samuels use his abilities to chase down, track or assassinate certain marks. The longer bounty quests reveal more details about Samuels’ surroundings and how he ended up on Exodus, as well as clues to help him get home. 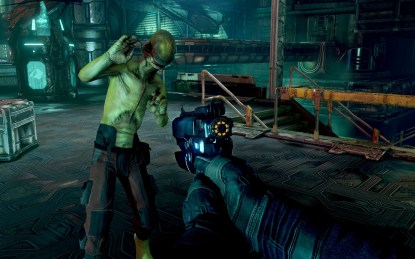 The bounty hunter quests reward the player with money that they can use to buy new equipment and weapons. Guns have upgradeable parts that add new features to each weapon and change the aesthetic look of the weapon. There are also different ammo types for each gun that the player can purchase, although Bethesda wouldn’t get into any additional details about that ammo system.

Like most modern open-world games, players are given the choice to be a nice guy or a complete dick. But it’s really over the top in Prey 2, and it’s fantastic. Sure, you can choose to kill baddies and help out people who are getting kicked to the ground. But players can also walk up behind a guy just minding his own business looking over a railing and kick him right off the ledge.

The consequences for being a jerk in the game are pretty minimal at first because it takes place in a slum-like area where there’s only loose authority. There are robots around the city that will track your movements and keep track of your actions. Those machines will start to open fire on you if you continue randomly killing people or just being a generally terrible person. The more bad actions you take, the worse the repercussions become — to the point of teleporting in reinforcements to take you down.

Prey 2 should come out sometime next year.