Like a lot of triple-A games, Prey could’ve easily had a hero who is white, male, and (usually) unshaven. But in a refreshing change of pace, developer Arkane Studios opted for someone who doesn’t follow the status quo — well, except for the unshaven part.

Out on May 5 for PlayStation 4, Xbox One, and PC, Prey stars Morgan Yu, a half-Chinese, half-German scientist who must fight his or her way (you can choose whether Morgan is male or female) through an alien-infested space station. Surprisingly, not much has been said about Prey’s mixed-race hero in the media since Arkane first showed the game last summer. But Morgan’s name and ethnicity is one of the things that struck me about Prey’s debut trailer from the 2016 Electronic Entertainment Expo trade show.

It’s disappointing how little I (or anyone else who’s not white) can see myself reflected in games, much less in movies and TV. It’s why, when given the chance, I almost always choose some type of Asian-looking face for my avatar, or in the case of Fallout 4’s deep character creator, try to recreate my likeness in the game. Of course, developers aren’t wrong or racist for having a white hero; I’ve enjoyed plenty of games that’ve had one. But at some point, it’s just boring to see the same kinds of faces over and over.

So when I sat down with Prey lead designer Ricardo Bare at this year’s Game Developers Conference in San Francisco, one of the first things I asked him was simply, “Why is the main character Asian?”

“For every creative decision we make, there’s not always a rational deduction that happens,” Bare explained. “Sometimes it’s just like, ‘This sounds cool!’ We just pick it. We wanted to have a character that wasn’t a typical Western white male guy who’s the lead. And we also wanted to let people select their gender, too, so that’s why we picked a gender-neutral name.” 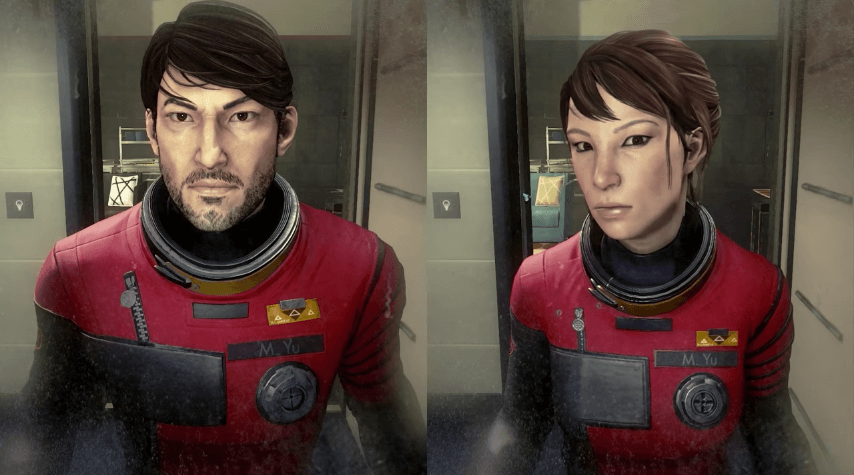 Above: You can choose whether Morgan Yu is male or female.

Prey is a reimagining of the universe Human Head Studios first created in its 2006 Prey game. The original was partly known for having a Native American character and a story that incorporated aspects of his Cherokee heritage. In this respect, Arkane seems to be following in Human Head’s footsteps.

“[Making the character Asian] makes as much sense as having any other kind of character. It doesn’t make more or less sense. We just thought it was interesting,” Bare continued. “We do, as a team, value diversity and representation in games. It’s not like — we’re not perfect. But we try to be conscious of that. It’s easy to slip into your default, you know what I mean? ‘The stuff I’m used to I don’t even think about. That’s what I put in the game.’

“It’s useful to pause and go, ‘Wait a minute. I don’t need to do the default here. I can try to do something more interesting.’”

Morgan’s family plays a big part in Prey’s story. Early on in the game, you’ll meet up with your brother, Alex Yu. And Bare told me that their parents — the father is a Chinese neuroscientist, and the mother is a German entrepreneur — will eventually “come into the mix at some point.” If you veer off from the main path and meticulously explore the Talos I space station, you’ll find out more about the Yu family backstory.

Prey isn’t going to solve the diversity problem overnight. For all I know, it might not even be a good game (I haven’t had a chance to play it yet). But hearing about Arkane’s thoughtful approach to designing Prey’s hero was encouraging. The industry could definitely use more of that kind of thinking.