I may have a problem.

Even though I’ve finished the main storyline of Professor Layton and the Azran Legacy, the sixth and final installment of developer Level-5’s beloved, brain-teaser-driven series (a crossover with Capcom’s stalwart lawyer Phoenix Wright is due out in North America sometime this year), I can’t stop playing it.

Herschel Layton, the titular hero of this game, due out February 28 for Nintendo’s 3DS and 2DS handheld systems, claims that “a true gentleman leaves no puzzle unsolved.” I don’t know how gentlemanly I am, but I am certain that I won’t put my stylus down until every puzzle has a solution. And that might just be my obsession talking, but the rest is pretty amazing, too. While the franchise’s chronological end is 2010’s Professor Layton and the Unwound Future, Azran Legacy is the real send-off, and it brings the series to as satisfying a conclusion as we could hope for.

It has the most variety in the series

Experienced Layton players know that every installment has “that puzzle” (also known as “that f***ing puzzle”): the one brainteaser that you simply will not understand no matter how many hints you get. It’s different for everyone; mine is a tie between spatial visualization (e.g., “tell us the layout of the symbols on this two-dimensional shape if we fold it into a three-dimensional shape”) and slide puzzles.

And it feels like once you’ve identified “that f***ing puzzle,” the game can’t throw enough of them at you. About the time you get to the third or fourth one, you wonder if the world would really miss this one tiny village if you just walked away and left it to its destruction. 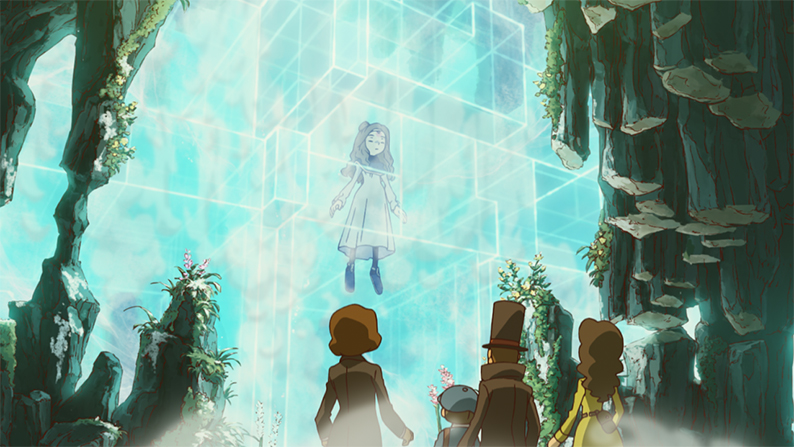 Above: I’ve seen The Thing, you guys. I know what happens next.

Azran Legacy, however, does not have this issue. I still encountered my least favorites, but only once or twice out of the game’s 150. They were still horrible, but the developer provided enough fun challenges that I spent less time gritting my teeth and more time looking forward to what was coming next.

And if you get tired of the regular gameplay, Azran Legacy also includes a bunch of minigames to keep you occupied. It has one in which you dress up characters to satisfy their fashion requests, one about a squirrel rolling nuts home, and some gardening-themed logic puzzles. Basically, you’re not going to run out of things to do for a while.

It’s natural to draw parallels between Layton and a certain other world-hopping archaeologist, and Azran Legacy has the most Indiana Jones-style plot of all six titles. You’ll travel to exotic locations; search for sacred, glowing stones; study the ruins of an ancient and seemingly magical civilization; and navigate a series of traps and trials to make your way through an ancient temple. All that’s missing is a red line tracing your path on the map as you fly across the globe.

While previous entries decided the fates of single villages or cities, Azran Legacy puts the entire world on the line. The different destinations and people you encounter do more than provide new scenery; they also demonstrate what is at stake. You have to see what’s in jeopardy in order for the importance of your mission to sink in. And what’s more, the resolutions of the conflicts at all of these various locales foreshadow and reinforce the overall message. It’s both functional and highly artistic storytelling, which is way more than you’d ever expect from a game that has two puzzles about fitting snakes into a jar. http://youtu.be/3YjrkdfqOJ4

Sometimes, the plot gets in the way

I know I just got done gushing about how brilliant the story is, but near the end, it starts to interfere with your important business of solving conundrums and wrapping everything up. At one point, when time is of the essence and everyone is talking about how important it is to keep moving, one character decides to drop a sizable info-dump of backstory, leaving the villains free to continue executing their nefarious scheme.

This moment of “let’s stop so I can tell you three very important and lengthy things” has no real bearing on good’s triumph over evil, but I found myself making “wrap it up” gestures at my 3DS because I really just wanted to do more brain-teasers. Because it is a puzzle game, damn it.

If you’ve never played a Layton game before, you’ll have no trouble getting into the main draw: the puzzles and minigames that drive the series forward. But it has a plot, too. Newcomers might take a while to catch up to the characters, and they definitely won’t catch the references to previous games. They’re better off beginning with Curious Village (the first title released) or The Last Specter (the first chronologically) to keep everything straight.

Professor Layton and the Azran Legacy is an amazing conclusion to the beloved puzzle series. Its variety and clever storytelling make it the most interesting and well-executed installment of the franchise, and it’s nice to see that after six games, Level-5 can keep surprising players with intriguing, surprisingly moving plots and hundreds of clever puzzles. I’m sorry to see the main series end, but if it must, this is exactly how to do it.

Professor Layton and the Azran Legacy comes out February 28 for Nintendo’s 3DS and 2DS handheld systems. Nintendo provided GamesBeat with a free download code for this game.