SAN FRANCISCO — Virtual reality is coming to the PlayStation 4.

Saying that PlayStation plans to “push the boundaries of play,” Sony Computer Entertainment president of worldwide studios Shuhei Yoshida announced today that Sony will be introducing a virtual reality headset for the PlayStation 4 called Project Morpheus. With this move, Sony joins Oculus VR and its Rift headset for PCs in the fairly new sector of virtual-reality gaming.

“Virtual reality may well shape the future of video games,” Yoshida declared during the 2014 Game Developers Conference, saying that VR has long been a dream of game developers. Sony first-party studios will make games for the device. Yoshida said one will be Sony’s London studio.

“I’m expecting more studios to work on something good [as more kits come out for development],” he said. “We decided on the name last week.”

Calling it a “new medium,” PlayStation Move codeveloper Anton Mikhailov said that the virtual reality will fundamentally change the rules of gaming. Among other things, a sense of presence will become much more important, which will impact everything from 3D sound to graphical depth. In turn, VR can give rise to a huge number of new emotions, including horror and vertigo, giving developers new tools for their games.

The current dev kit has a 1080p HD display and a 90-plus degree of view, Mikhailov said. It will include 1,000Hz of tracking (1 sample per 1 milisecond) and three-meter working volume, along with forward tracking. In addition, it will include what Mikhailov calls “true spatial sound.” Sony had to come up with six different technologies to make it happen.

Sony has been experimenting with VR since the introduction of the Move (its take on motion controls), with Yoshida shown wearing an experimental VR headset as far back as fall 2010. Wearing the head-mounted display, Yoshida showed a video in which he played a first-person version of God of War using the original prototype. 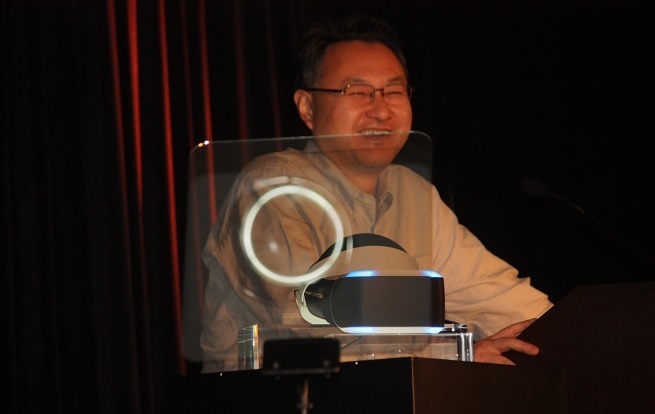 Above: Sony exec Shuhei Yoshida shows off Project Morpheus, the virtual-reality headset for the PlayStation 4.

“I became Kratos,” Yoshida said, after which the audience saw a typically graphic God of War execution sequence from the first-person perspective. “It was an empowering experience,” he joked.

Citing the advances made by comparable efforts like the Oculus Rift, Sony head of research and development Richard Marks said that he expects virtual reality to become the preferred medium for “all sorts of applications.”

In developing Project Morpheus, Marks said that Sony’s VR pillars include sight, sound, tracking, control, ease of use, and convenience. It will be compatible with both the DualShock 4 and PlayStation Move, the latter of which Marks described as a “very good VR controller” due to its six degrees of freedom.

Morpheus, by the way, is the name of the Greek god of dreams.

Sony is already finding itself playing a sort of catchup with Oculus, even if both companies are working in different sectors.

Oculus is a startup that raised $2.4 million in a hugely successful crowdfunding drive on Kickstarter for its Rift VR headset, which works for PCs. It has since raised $75 million in further funding rounds. Oculus also drew an industry heavyweight when it hired id Software cofounder John Carmack as its chief technology officer. Credited as a programming genius, Carmack helped create the iconic first-person shooters Doom and Quake, and he’s making software for the Rift. CCP Games, the maker of the successful Eve Online massively multiplayer online space game, is creating an Oculus-enabled starfighting sim, Eve: Valkyrie.

Sony will be showing Project Morpheus at its booth on the show floor tomorrow. Demos include The Deep, which sends players underwater to meet deep sea predators, as well as VR versions of Valkyrie and the recent release, Thief. Expect full hands-on impressions soon.

Stay tuned for further updates as the session continues.