The startup’s first free-to-play game is a first-person shooter title where you can point a smartphone with a 363R Trigger attachment on it to virtually shoot at other players in the real world. Some players can play the game with a simple smartphone app. But others can purchase the 363R Trigger smartphone attachment and use it to shoot at people. With the trigger, you can fire your laser gun at other players and hit them if they are within 50 meters.

Two different factions fight over real-world territory in Risk-like battles in the game. If you shoot other opponents in a given location, your faction can claim that location.

“We invented Father.io because we want to disrupt the gaming market, which has not had so much innovation in gaming experiences,” said Francesco Ferrazzino, chief executive and lead developer of Proxy42, in an interview with GamesBeat. “The Nintendo Wii and Oculus Rift did great things. But we want to take augmented reality even further. We want to make video games become real.”

Proxy42, which has offices in Trento, Italy, and San Francisco, is launching a presale program and crowdfunding campaign on its own web site today. The game will work with iOS and Android devices.

“We have 50,000 gamers signed up to play without investing a dime in marketing so far, Ferrazzino said.

Players can download the free Father.io mobile app and attach a trigger to their smartphones. After that, the player’s own physical landscapes become the battleground for the game. You can fight in your own yards, cities, and other locations where players congregate. Players can record the real-life action in real-time on a mobile device at 720p high-definition resolution. Then they can share it over YouTube, Facebook, or other social networks.

“While the basic, location-based, strategy gameplay is free and requires no additional hardware, the 363R Trigger transforms Father.IO into a multiplayer, first-person shooter game the likes of which we have never seen,” Ferrazzino said. “For this reason, we are launching this pre-sale to fund the production of 5,000 initial triggers for gameplay.”

The game is similar to Google’s Ingress game, another augmented reality game where players conquer territory in the real world. Both games get players off the couch and into the real world. Both encourage physical activity. But Father.io has much more of an action element in its gameplay, Ferrazzino said.

The storyline of the game akin to the Terminator, with one faction supporting robotics and artificial intelligence, and another supporting purely human categories. The game is build on an open framework, which allows developers to create their own games using the trigger with Proxy42’s software development kit for iOS and Android.

Alessio Cavatore, former Warhammer 40k game designer, has worked on the design of the game. Proxy42 has also tapped a community of 3,000 gamers for feedback. Those gamers have helped spread the world about the game. The technology uses computer vision and portable hardware.

“We believe Father.io will redefine the use of augmented and virtual reality in gaming,” added Ferrazzino. “We’re placing the game and gamer in an augmented real world, which incorporates the people places and things around us. It’s really a next generation gaming platform,” which we hope to bring to life further with future hardware product like haptic feedback t-shirts and maybe even shooting drones.”

The 363R Trigger will sell for the next 30 days at a pre-sale price of $59 via a crowdfunding campaign that is being powered by Tilt. The game will be available in the spring of 2015. The 363R Trigger is certified by Dragon Innovation, a hardware manufacturing think tank.

Ferrazzino said the company will likely look for additional funding after it completes the crowdfunding campaign.

Proxy42 was founded in December, 2012. It has 10 employees, and it is a finalist for the LeWeb 2014 startup competition. The company has raised about $70,000 to date via angel investors. 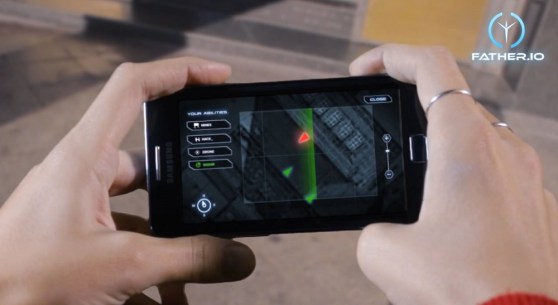 Above: Father.io finds enemies on a location grid.