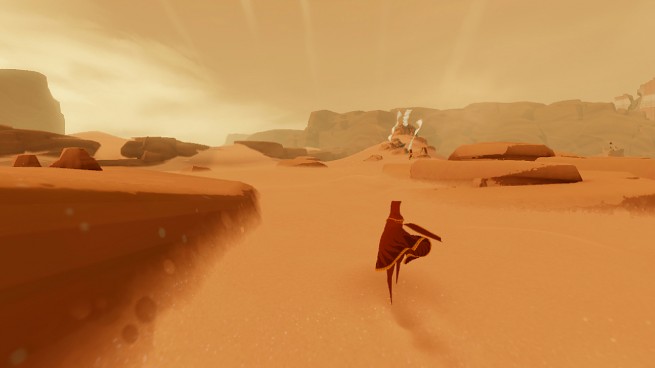 UPDATE: Jenova Chen’s original comments below were in reference to the PlayStation Network, not to the PS3 platform as a whole. We left out that context and apologize for the oversight.

Jenova Chen, Thatgamecompany‘s lead designer for PlayStation 3’s Journey, sees a striking difference between the PS3 and its competitors. “Sony has a more artistic and adult-focused taste,” Chen said in an email conversation with GamesBeat, in reference to the PlayStation Network’s portfolio of digital software when compared to Xbox Live Arcade and WiiWare. “They care about how grown-ups feel toward their games.”

The top sellers on the respective platforms may support his claim. While plenty of adults surely enjoy Castle Crashers and Trials Evolution (two best-selling Xbox Live Arcade games), the cerebral crowd hasn’t rallied around those like they have with Journey (PlayStation Network’s fastest selling title).

GamesBeat contacted Microsoft and Nintendo to see if either company wished to respond, but both declined. Sony, however, was very willing to agree with Chen’s assessment.

“Our primary PSN audience is indeed more adult, and many of our best-selling titles appeal to this demographic,” senior director of PlayStation digital platforms Jack Buser told GamesBeat. “Many PlayStation and PSN games have themes that require a user to think and feel about a deep, immersive gameplay experience, and we see that exemplified in the success of titles like Flower, Journey, and Heavy Rain. Titles like these can only be found on PlayStation, and our users enjoy the emotional and thematic sophistication of their games, especially with our digital offerings.”

Chen takes it one step further. “The player who owns a PlayStation 3 [and is playing PSN titles] is more likely to be interested in artistic games compared to Wii and Xbox 360,” the designer wrote.

Sony won’t release its PSN sales numbers, so it’s difficult to verify Chen and Buser’s claims. The success of the digital service’s more cultured products could be coincidence. The most artistic offerings may simultaneously be the most well-made, and consumers are drawn to the quality rather than any perceived artiness.

But we do have to take issue with the claim that Sony somehow cares more about adults than the other hardware manufacturers. Titles like I Am Alive and Alan Wake’s American Nightmare are recent releases that serve a mature audience on the Xbox 360. They may not fit Jenova Chen’s definition of “artistic,” but not everything will.

Besides, some of us prefer the beautiful audio art that opens up each game of Trials Evolution.